ESA’s Mars Express imaged the striking upper part of the Reull Vallis region of Mars with its high-resolution stereo camera last year.
Reull Vallis, the river-like structure in these images, is believed to have formed when running water flowed in the distant martian past, cutting a steep-sided channel through the Promethei Terra Highlands before running on towards the floor of the vast Hellas basin.
This sinuous structure, which stretches for almost 1500 km across the martian landscape, is flanked by numerous tributaries, one of which can be clearly seen cutting in to the main valley towards the upper (north) side.
- 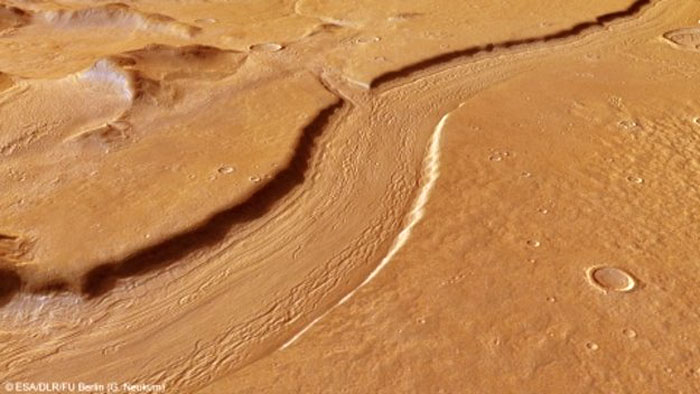 Perspective view of Reull Vallis
The new Mars Express images show a region of Reull Vallis at a point where the channel is almost 7 km wide and 300 m deep.
-

Topographic view of Reull Vallis
The sides of Reull Vallis are particularly sharp and steep in these images, with parallel longitudinal features covering the floor of the channel itself. These structures are believed to be caused by the passage of loose debris and ice during the ‘Amazonian’ period (which continues to this day) due to glacial flow along the channel.
The structures were formed long after it was originally carved by liquid water during the Hesperian period, which is believed to have ended between 3.5 billion and 1.8 billion years ago.
Similar lineated structures, believed to be rich in ice, can also be found in many of the surrounding craters.
- 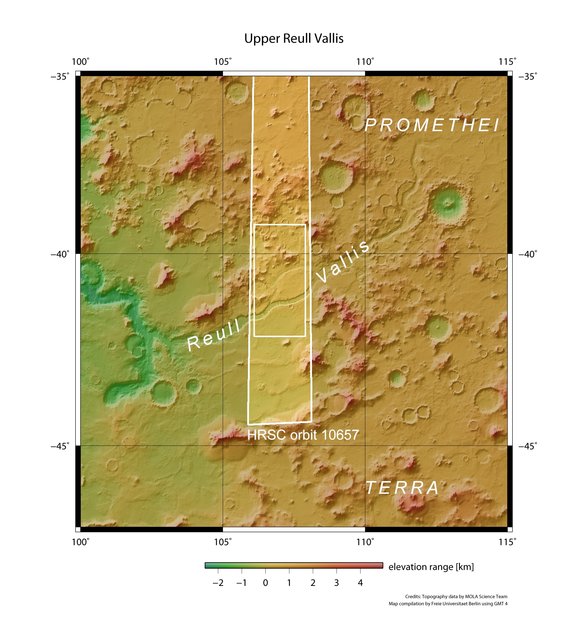 In the wider context image, the tributary intersecting the main channel appears to be part of a forking of the main valley into two distinct branches further upstream before merging back into a single main valley.
The right (northern) part of the main image is dominated by the Promethei Terra Highlands with their high and soft-rounded mountains shown in these images, rising around 2500 m above the surrounding flat plains.
The perspective view below shows one of these mountains with nearby sediment-filled impact craters.
- 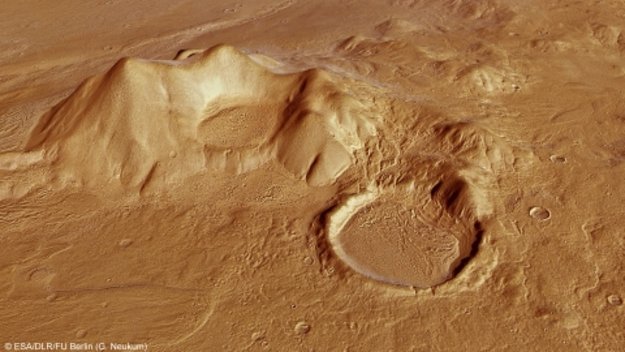 Perspective view of Reull Vallis
This region shows a striking resemblance to the morphology found in regions on Earth affected by glaciation. For example, we can see circular step-like structures on the inner walls of the sediment-filled crater in the foreground of the second perspective view. Planetary scientists think that these may represent former high water or glacial levels, before ice and water sublimated or evaporated away in stages at various times.
-

3D view of Reull Vallis
The morphology of Reull Vallis suggests it has experienced a diverse and complex history, with analogies seen in glacial activity on Earth. These analogies are giving planetary geologists tantalising glimpses of a past on the Red Planet not too dissimilar to events on our own world today.
-
Quelle: ESA
« Zum vorherigen Eintrag Zum nächsten Eintrag »
4488 Views
Created with page4