Europe and US agree details for Orion astronaut spacecraft 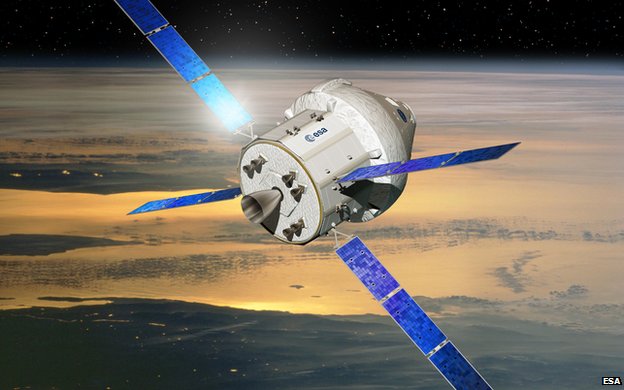 The US and Europe have cemented their plan to work together on the Americans' next-generation capsule system to take humans beyond Earth.
The Orion vehicle is being built to carry astronauts to the Moon, asteroids and Mars, but it will need a means to propel itself through space.
Europe has now formally agreed to provide this technology.
Space agency executives have just signed an "implementing agreement" to cover the legal aspects of the work.
The first flight of Orion with its European-built "service module" will take place in 2017.
This demonstration will be unmanned and will see Orion go around the back of the Moon before returning to Earth for an ocean splashdown.
If all goes well, a crew is expected to repeat the feat in about 2021. The venture would echo the famous Apollo 8 mission of 1968.
The service module is the unit that sits directly behind the capsule and provides the propulsion, power, temperature control, as well as holding the astronauts’ supplies of water and air.
"This is a new page in the transatlantic co-operation," said Thomas Reiter, the director of human spaceflight and operations at the European Space Agency (Esa).
"This is the first time that Esa is involved in the critical path for a human transportation system. It is a fantastic perspective for the future, taking humans beyond low-Earth orbit to new destinations for exploration," he told BBC News.
The current plan calls for Europe to build the prototype module for 2017 and a number of components that would be needed for the second vehicle in 2021, although a formal go-ahead to complete this additional model is some years off.
A clear subtext, of course, is that Europe hopes this initial deal will develop into a long-term relationship, and that this will increase the chances of its astronauts joining their American colleagues on missions into deep space. 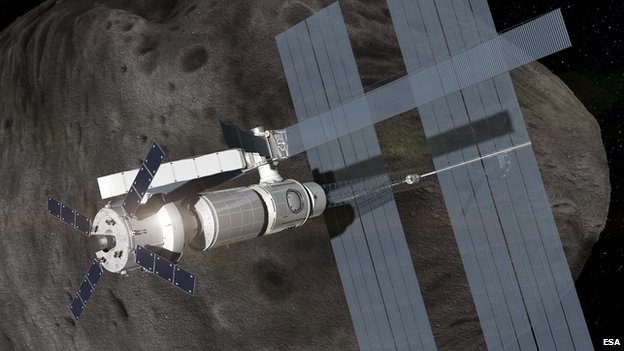 The ATV-derived service module, with its distinctive solar wing configuration, is shown in this artwork participating in a mission to an asteroid
-
Europe and the US will be using a barter arrangement to fund the module’s production.
This means the Americans will pay no cash for the unit. Rather, they will view the free receipt of the hardware as compensation for the costs they themselves have incurred through Europe’s use of the International Space Station (ISS).
To date, these costs have been covered by Europe’s deliveries of cargo to the platform using its big robotic freighter known as the Automated Transfer Vehicle (ATV).
But the production of these ATVs is nearing its end, and without the Orion option Europe would be in debt to the US to the cash-equivalent of 450m euros (£375m; $600m) for the period 2017-2020.
"More importantly than that financial piece is just the experience gained through the International Space Station," said Bill Gerstenmaier, Nasa's associate administrator for human exploration and operations.
"To build that wonderful facility on orbit, we needed to work a lot of technical issues, a lot of technical problems. And that experienced gained and that trust that grew between our European partners and our Nasa teams allowed us to go ahead and put together this service module agreement you see today."
European industry will now take key elements from the design of its ATV to make the Orion service module.
This work is quite advanced because feasibility studies in recent years have already considered how the ATV itself could be adapted into a crew vehicle.
"We are not starting from scratch," Mr Reiter explained. "Were that the case, it would be extremely difficult, if not impossible, to meet the scheduling constraints."
One small, but nonetheless intriguing, aspect of the service module’s production is the role, if any, that might be given to UK industry.
It was Britain’s offer during discussions at the recent Esa Ministerial Council in November to put 20m euros (£16m; $27m) into the cost of the vehicle that helped ease the project towards approval. Under Esa rules, the UK could expect some return on this investment.
Mr Reiter said it was too early to talk specifics. However, he did add that at least some of the return could take the form of equipment procured for use on the space station's European science laboratory, Columbus.
Esa is expected to sign a formal contract with Astrium (Bremen, Germany) in the coming days to lead the production of the service module.
-
Quelle: BBC-News
« Zum vorherigen Eintrag Zum nächsten Eintrag »
4278 Views
Created with page4