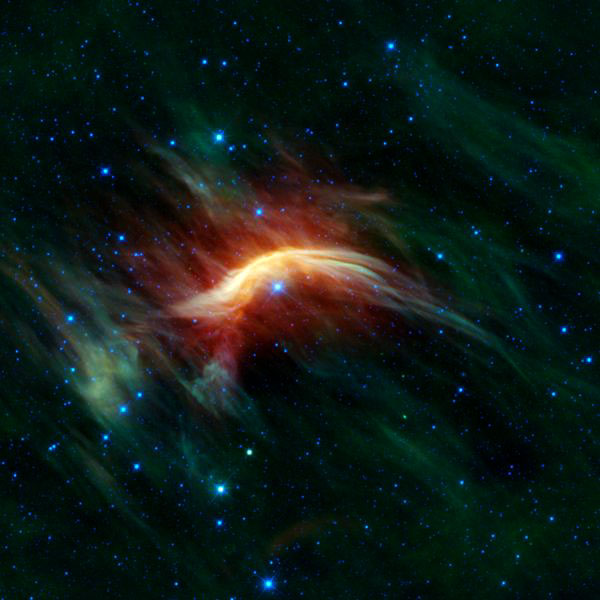 Zeta Ophiuchi -- Runaway Star Plowing through Space Dust
The blue star near the center of this image is Zeta Ophiuchi. When seen in visible light it appears as a relatively dim red star surrounded by other dim stars and no dust. However, in this infrared image taken with NASA's Wide-field Infrared Survey Explorer, or WISE, a completely different view emerges. Zeta Ophiuchi is actually a very massive, hot, bright blue star plowing its way through a large cloud of interstellar dust and gas.
Astronomers theorize that this stellar juggernaut was likely once part of a binary star system with an even more massive partner. It's believed that when the partner exploded as a supernova, blasting away most of its mass, Zeta Ophiuchi was suddenly freed from its partner's pull and shot away like a bullet moving 24 kilometers per second (54,000 miles per hour). Zeta Ophiuchi is about 20 times more massive and 65,000 times more luminous than the sun. If it weren't surrounded by so much dust, it would be one of the brightest stars in the sky and appear blue to the eye. Like all stars with this kind of extreme mass and power, it subscribes to the 'live fast, die young' motto. It's already about halfway through its very short 8-million-year lifespan. In comparison, the sun is roughly halfway through its 10-billion-year lifespan. While the sun will eventually become a quiet white dwarf, Zeta Ophiuchi, like its ex-partner, will ultimately die in a massive explosion called a supernova.
Perhaps the most interesting features in this image are related to the interstellar gas and dust that surrounds Zeta Ophiuchi. Off to the sides of the image and in the background are relatively calm clouds of dust, appearing green and wispy, slightly reminiscent of the northern lights. Near Zeta Ophiuchi, these clouds look quite different. The cloud in all directions around the star is brighter and redder, because the extreme amounts of ultraviolet radiation emitted by the star are heating the cloud, causing it to glow more brightly in the infrared than usual.
Even more striking, however, is the bright yellow curved feature directly above Zeta Ophiuchi. This is a magnificent example of a bow shock. In this image, the runaway star is flying from the lower right towards the upper left. As it does so, its very powerful stellar wind is pushing the gas and dust out of its way (the stellar wind extends far beyond the visible portion of the star, creating an invisible 'bubble' all around it). And directly in front of the star's path the wind is compressing the gas together so much that it is glowing extremely brightly (in the infrared), creating a bow shock. It is akin to the effect you might see when a boat pushes a wave in front it as it moves through the water. This feature is completely hidden in visible light. Infrared images like this one from WISE shed an entirely new light on the region.
The colors used in this image represent specific wavelengths of infrared light. Blue and cyan (blue-green) represent light emitted at wavelengths of 3.4 and 4.6 microns, which is predominantly from stars. Green and red represent light from 12 and 22 microns, respectively, which is mostly emitted by dust.
- 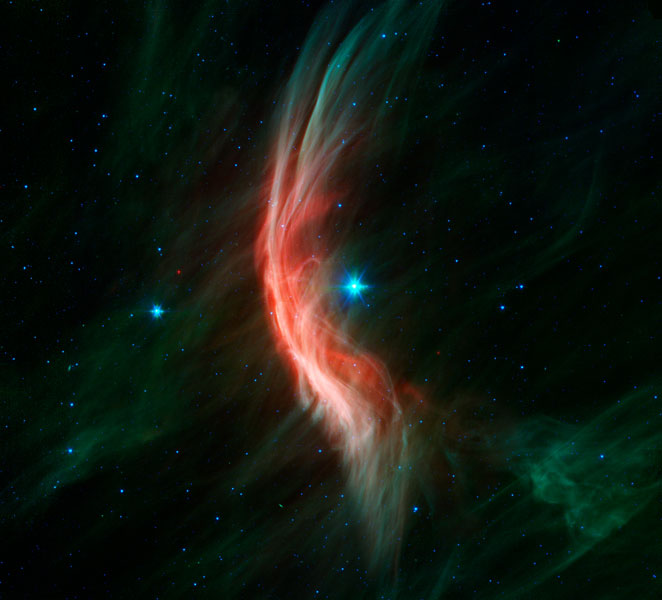 Massive Star Makes Waves
The giant star Zeta Ophiuchi is having a "shocking" effect on the surrounding dust clouds in this infrared image from NASA's Spitzer Space Telescope. Stellar winds flowing out from this fast-moving star are making ripples in the dust as it approaches, creating a bow shock seen as glowing gossamer threads, which, for this star, are only seen in infrared light.
Zeta Ophiuchi is a young, large and hot star located around 370 light-years away. It dwarfs our own sun in many ways -- it is about six times hotter, eight times wider, 20 times more massive, and about 80,000 times as bright. Even at its great distance, it would be one of the brightest stars in the sky were it not largely obscured by foreground dust clouds.
This massive star is travelling at a snappy pace of about 54,000 mph (24 kilometers per second), fast enough to break the sound barrier in the surrounding interstellar material. Because of this motion, it creates a spectacular bow shock ahead of its direction of travel (to the left). The structure is analogous to the ripples that precede the bow of a ship as it moves through the water, or the sonic boom of an airplane hitting supersonic speeds.
The fine filaments of dust surrounding the star glow primarily at shorter infrared wavelengths, rendered here in green. The area of the shock pops out dramatically at longer infrared wavelengths, creating the red highlights.
A bright bow shock like this would normally be seen in visible light as well, but because it is hidden behind a curtain of dust, only the longer infrared wavelengths of light seen by Spitzer can reach us.
Bow shocks are commonly seen when two different regions of gas and dust slam into one another. Zeta Ophiuchi, like other massive stars, generates a strong wind of hot gas particles flowing out from its surface. This expanding wind collides with the tenuous clouds of interstellar gas and dust about half a light-year away from the star, which is almost 800 times the distance from the sun to Pluto. The speed of the winds added to the star's supersonic motion result in the spectacular collision seen here.
Our own sun has significantly weaker solar winds and is passing much more slowly through our galactic neighborhood so it may not have a bow shock at all. NASA's twin Voyager spacecraft are headed away from the solar system and are currently about three times farther out than Pluto. They will likely pass beyond the influence of the sun into interstellar space in the next few years, though this is a much gentler transition than that seen around Zeta Ophiuchi.
For this Spitzer image, infrared light at wavelengths of 3.6 and 4.5 microns is rendered in blue, 8.0 microns in green, and 24 microns in red.
JPL manages the Spitzer Space Telescope mission for NASA's Science Mission Directorate, Washington. Science operations are conducted at the Spitzer Science Center at Caltech. Data are archived at the Infrared Science Archive housed at the Infrared Processing and Analysis Center at Caltech.
Quelle: NASA
3681 Views
Created with page4