With giant Saturn hanging in the blackness and sheltering Cassini from the Sun’s blinding glare, the spacecraft viewed the rings as never before, revealing previously unknown faint rings and even glimpsing its home world.
This marvelous panoramic view was created by combining a total of 165 images taken by the Cassini wide-angle camera over nearly three hours on Sept. 15, 2006. The full mosaic consists of three rows of nine wide-angle camera footprints; only a portion of the full mosaic is shown here. Color in the view was created by digitally compositing ultraviolet, infrared and clear filter images and was then adjusted to resemble natural color.
The mosaic images were acquired as the spacecraft drifted in the darkness of Saturn’s shadow for about 12 hours, allowing a multitude of unique observations of the microscopic particles that comprise Saturn’s faint rings.
Ring structures containing these tiny particles brighten substantially at high phase angles: i.e., viewing angles where the Sun is almost directly behind the objects being imaged.
During this period of observation Cassini detected two new faint rings: one coincident with the shared orbit of the moons Janus and Epimetheus and another coincident with Pallene’s orbit. (See PIA08322 and PIA08328 for more on the two new rings.)
- 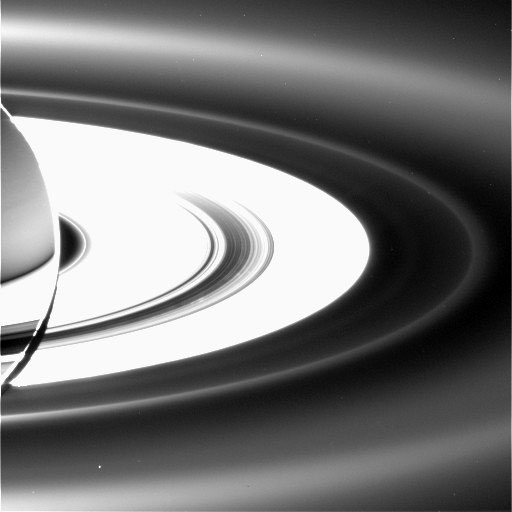 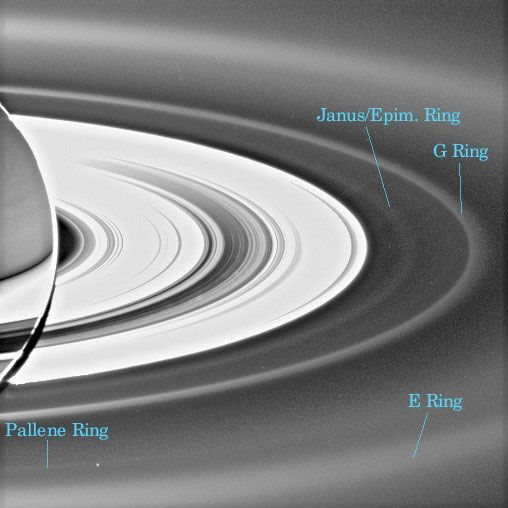 The narrowly confined G ring is easily seen here, outside the bright main rings. Encircling the entire system is the much more extended E ring. The icy plumes of Enceladus, whose eruptions supply the E ring particles, betray the moon’s position in the E ring’s left side edge.
Interior to the G ring and above the brighter main rings is the pale blue dot of Earth. Cassini views its point of origin from over a billion kilometers (and close to a billion miles) away in the icy depths of the outer solar system. See PIA08324 for a similar view of Earth taken during this observation.
- 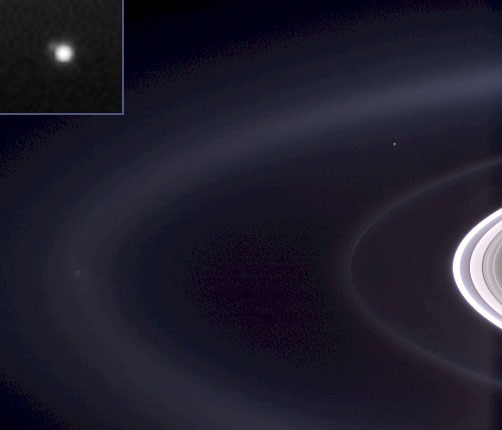 Small grains are pushed about by sunlight and electromagnetic forces. Hence their distribution tells much about the local space environment.
A second version of the mosaic view is presented here in which the color contrast is greatly exaggerated. In such views, imaging scientists have noticed color variations across the diffuse rings that imply active processes sort the particles in the ring according to their sizes.
Looking at the E ring in this color-exaggerated view, the distribution of color across and along the ring appears to be different between the right side and the left. Scientists are not sure yet how to explain these differences, though the difference in phase angle between right and left may be part of the explanation. The phase angle is about 179 degrees on Saturn.
The main rings are overexposed in a few places. Reddish lens flares are visible in both versions of the view. These radially extending artifacts result from light being scattered within the camera optics.
This view looks toward the unlit side of the rings from about 15 degrees above the ringplane.
Cassini was approximately 2.2 million kilometers (1.3 million miles) from Saturn when the images in this mosaic were taken. Image scale on Saturn is about 260 kilometers (162 miles) per pixel.
-