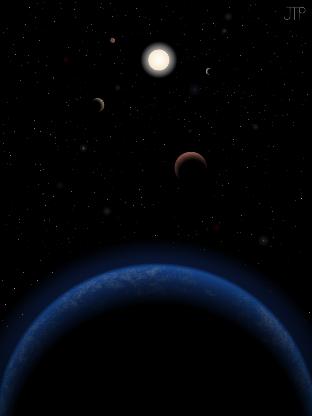 A potentially Earthlike planet has been found only 12 light-years away by an international team of astronomers using the Keck Observatory on Mauna Kea.
The planet orbiting the star Tau Ceti is in the so-called Goldilocks zone — not too hot, not too cold — that can accommodate liquid water, essential to life as we know it.
The star’s relatively proximity — the nearest star to Earth is Alpha Centauri at 4.3 light-years — makes it an ideal candidate for a future interstellar space mission.
In fact, the star is so close it’s visible to the naked eye.
“Tau Ceti is one of our nearest cosmic neighbors and so bright that we may be able to study the atmospheres of these planets in the not too distant future,” said researcher James Jenkins of the University of Chile and a visiting fellow at the University of Hertfordshire in England, said in a statement tonight. “Planetary systems found around nearby stars close to our Sun indicate that these systems are common in our Milky Way galaxy.”
Tau Ceti is also the closest star that has the same classification as the sun.
Its five planets are estimated to have masses between two and six times the mass of the Earth, making it the lowest-mass planetary system yet detected, Keck officials said on the observatory’s website.
The planet in the habitable zone has a mass around five times that of Earth, making it the smallest planet found to be orbiting in the habitable zone of any Sun-like star.
“This discovery is in keeping with our emerging view that virtually every star has planets, and that the galaxy must have many such potentially habitable Earth-sized planets,” said Steve Vogt from University of California, Santa Cruz. “They are everywhere, even right next door.”
The findings are due to be published Wednesday in the journal Astronomy & Astrophysics.
« Zum vorherigen Eintrag Zum nächsten Eintrag »
4212 Views
Created with page4