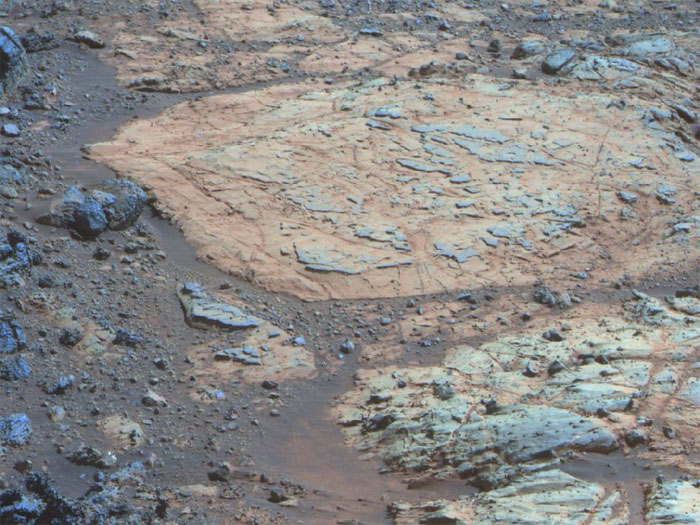 'Whitewater Lake' Rock Viewed by Opportunity
A rind that appears bluish in this false-color view covers portions of the surface of a rock called "Whitewater Lake" in the top half of the view from NASA's Mars Exploration Rover Opportunity. This rind is similar in appearance to weathering rinds previously seen by Opportunity on rocks elsewhere within the Meridiani Planum region where the rover has worked since landing in 2004. Whitewater Lake is in the "Matijevic Hill" portion of the "Cape York" segment of the rim of Endeavour Crater.
The three exposures through different filters that were composited into this image were taken by Opportunity's panoramic camera (Pancam) during the mission's 3,064th Martian day, or sol (Sept. 6, 2012). The view is presented in false color that enhances color differences among various geological materials in the scene.
- 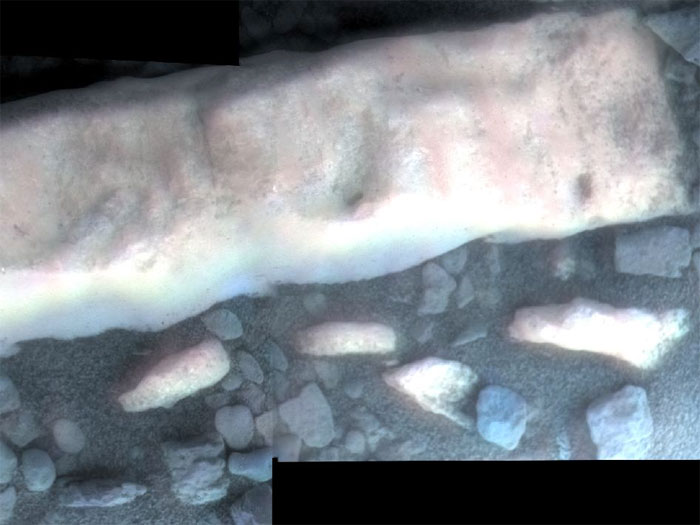 'Homestake' Vein on 'Cape York,' Color Enhanced
NASA's Mars Exploration Rover Opportunity inspected this mineral vein, called "Homestake," in November 2011 at the northern end of the "Cape York" section of Endeavour Crater's western rim. The vein is about the width of a thumb and about 18 inches (45 centimeters) long, extending beyond the portion shown here.
This view, showing subtle linear texture on the bright vein, combines close-up detail recorded by Opportunity's microscopic imager (MI) and enhanced color information from Opportunity's panoramic camera (Pancam). The area covered in this view spans about 2 inches (5 centimeters) across. The MI exposures used in this view were taken while the vein was fully shadowed by the rover during the mission's 2,766th Martian day, or sol (Nov. 4, 2011).
- 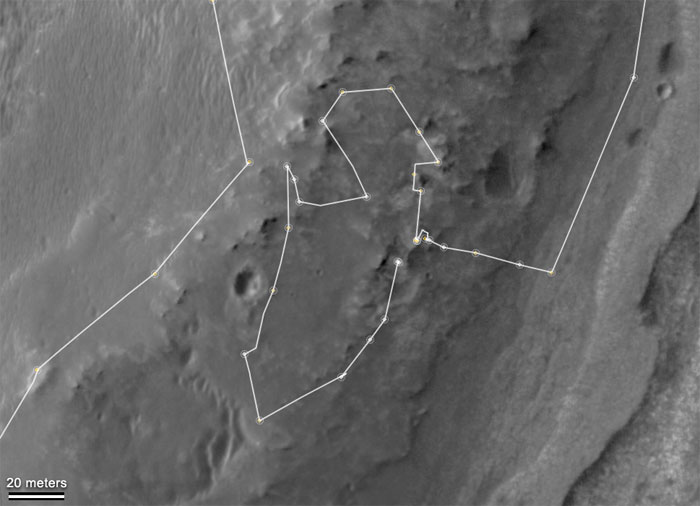 This map shows the route driven by NASA's Mars Exploration Rover Opportunity during a reconnaissance circuit around an area of interest called "Matijevic Hill" on the rim of a large crater. Image credit: NASA/JPL-Caltech/Arizona
-
The latest work assignment for NASA's long-lived Mars rover Opportunity is a further examination of an area where the robot just completed a walkabout.
"If you are a geologist studying a site like this, one of the first things you do is walk the outcrop, and that's what we've done with Opportunity," said Steve Squyres, the mission's principal investigator at Cornell University in Ithaca, N.Y.
Coming up on its ninth anniversary, Opportunity still is a capable robotic explorer. It has been investigating a crater-rim site where observations from orbiting Mars spacecraft detected traces of clay minerals, which form under wet, non-acidic conditions that can be favorable for life. The rover's current activities were presented at the Fall Meeting of the American Geophysical Union in San Francisco.
The rover team chose this site as a driving destination years earlier. The site is named Matijevic Hill in honor of the late Jacob Matijevic, who led the engineering team for the twin Mars exploration rovers Spirit and Opportunity for several years.
Opportunity drove about 1,160 feet (354 meters) in a counterclockwise circuit around Matijevic Hill in October and November, bringing the total miles driven on the mission to 22 miles (35.4 kilometers). Researchers used the rover to survey the extent of Matijevic Hill outcrops and identify the best places to investigate further.
"We've got a list of questions posed by the observations so far," Squyres said. "We did this walkabout to determine the most efficient use of time to answer the questions. Now we have a good idea what we're dealing with, and we're ready to start the detailed work."
The hill is on the western rim of Endeavour Crater, a bowl 14 miles (22 kilometers) in diameter. An impact from a celestial object dug this crater more than 3 billion years ago, pushing rocks onto the rim from a greater depth than Opportunity reached during its first several years on Mars. Since the impact, those rocks may have been altered by environmental conditions. Sorting out the relative ages of local outcrops is a key to understanding the area's environmental history.
"Almost nine years into a mission planned to last for three months, Opportunity is fit and ready for driving, robotic-arm operations and communication with Earth," said the mission's deputy project scientist, Diana Blaney, of NASA's Jet Propulsion Laboratory in Pasadena, Calif.
Two outcrops of high interest on Matijevic Hill are "Whitewater Lake" and "Kirkwood." Whitewater Lake is light-toned material that science team members believe may contain clay. Kirkwood contains small spheres with composition, structure and distribution that differ from other iron-rich spherules, nicknamed blueberries, that Opportunity found at its landing site and throughout the Meridiani Planum area it has explored. Squyres calls the Kirkwood spheres "newberries."
"We don't know yet whether Whitewood Lake and Kirkwood are from before or after the crater formed," he said. "One of the most important things to work out is the order and position of the rock layers to tell us the relative ages. We also need more work on the composition of Whitewater and debris shed by Whitewater to understand the clay signature seen from orbit, and on the composition of the newberries to understand how they formed."
NASA launched Spirit and Opportunity in 2003. Both completed their three-month prime missions in April 2004 with Spirit ceasing operations in 2010. The mission's goal is to learn about the history of wet environments on ancient Mars. JPL manages the Mars Exploration Rover Project for NASA's Science Mission Directorate at NASA Headquarters in Washington.
-
Quelle: NASA
« Zum vorherigen Eintrag Zum nächsten Eintrag »
4067 Views
Created with page4