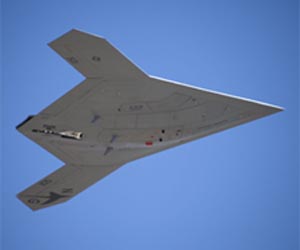 Northrop Grumman and the U.S. Navy have conducted the Navy's first catapult launch of an unmanned system using the X-47B Unmanned Combat Air System (UCAS) demonstrator.
The test was conducted at a shore-based catapult facility at Naval Air Station Patuxent River, Md.
It marks the first of several shore-based catapult-to-flight tests that will be performed before the Navy's UCAS Carrier Demonstration (UCAS-D) program catapult launches the X-47B from a ship.
Northrop Grumman is the Navy's prime contractor for the UCAS-D program.
"The successful launch is another critical milestone in the carrier-suitability testing phase of the UCAS-D program," said Mike Mackey, Northrop Grumman's UCAS-D program director. "It also provides another confidence-building step toward our rendezvous with history next year."
Following the catapult launch, the X-47B conducted a test flight over Chesapeake Bay near Patuxent River.
The flight included several maneuvers designed to simulate tasks that the aircraft will have to perform when it lands on a ship, including flying in a typical ship holding pattern, and executing a carrier approach flight profile.
The flight also allowed the test team to gather precision navigation data associated with each of those maneuvers.
According to Daryl Martis, Northrop Grumman's UCAS-D flight test director, the catapult event was significant for another reason: "This launch provided our team with another opportunity to demonstrate the precision operation of the Northrop Grumman-developed Control Display Unit [CDU], one of the key enablers of future flight deck operations for the X-47B," he said.
The CDU is a wireless, arm-mounted controller that will allow a flight deck operator to control and maneuver the X-47B on the flight deck, including moving it into the catapult, disengaging it from the carrier's arresting wires and moving it quickly out of the landing area.
Over the next few weeks, the UCAS-D program expects to conduct several shore-based catapults at Patuxent River.
On Nov. 26, an X-47B was hoisted aboard the USS Harry S. Truman (CVN-75) at Naval Air Station, Norfolk, Va. to begin a series of deck handling trials.
The trials, expected to run through mid December, will be used to evaluate the performance of the CDU in an actual carrier environment.
In 2013, the program plans to demonstrate the ability of an X-47B to operate from a Navy aircraft carrier, including launch, recovery and air traffic control operations.
The program will also mature technologies required for potential future Navy unmanned air system programs.
« Zum vorherigen Eintrag Zum nächsten Eintrag »
4160 Views
Created with page4