The first Martian rock NASA's Curiosity rover has reached out to touch presents a more varied composition than expected from previous missions. The rock also resembles some unusual rocks from Earth's interior.
The rover team used two instruments on Curiosity to study the chemical makeup of the football-size rock called "Jake Matijevic" (matt-EE-oh-vick) The results support some surprising recent measurements and provide an example of why identifying rocks' composition is such a major emphasis of the mission. Rock compositions tell stories about unseen environments and planetary processes.
"This rock is a close match in chemical composition to an unusual but well-known type of igneous rock found in many volcanic provinces on Earth," said Edward Stolper of the California Institute of Technology in Pasadena, who is a Curiosity co-investigator. "With only one Martian rock of this type, it is difficult to know whether the same processes were involved, but it is a reasonable place to start thinking about its origin."
On Earth, rocks with composition like the Jake rock typically come from processes in the planet's mantle beneath the crust, from crystallization of relatively water-rich magma at elevated pressure.
Jake was the first rock analyzed by the rover's arm-mounted Alpha Particle X-Ray Spectrometer (APXS) instrument and about the thirtieth rock examined by the Chemistry and Camera (ChemCam) instrument. Two penny-size spots on Jake were analyzed Sept. 22 by the rover's improved and faster version of earlier APXS devices on all previous Mars rovers, which have examined hundreds of rocks. That information has provided scientists a library of comparisons for what Curiosity sees.
"Jake is kind of an odd Martian rock," said APXS Principal Investigator Ralf Gellert of the University of Guelph in Ontario, Canada. "It's high in elements consistent with the mineral feldspar, and low in magnesium and iron."
ChemCam found unique compositions at each of 14 target points on the rock, hitting different mineral grains within it.
"ChemCam had been seeing compositions suggestive of feldspar since August, and we're getting closer to confirming that now with APXS data, although there are additional tests to be done," said ChemCam Principal Investigator Roger Wiens (WEENS) of Los Alamos National Laboratory in New Mexico.
Examination of Jake included the first comparison on Mars between APXS results and results from checking the same rock with ChemCam, which shoots laser pulses from the top of the rover's mast.
The wealth of information from the two instruments checking chemical elements in the same rock is just a preview. Curiosity also carries analytical laboratories inside the rover to provide other composition information about powder samples from rocks and soil. The mission is progressing toward getting the first soil sample into those analytical instruments during a "sol," or Martian day.
"Yestersol, we used Curiosity's first perfectly scooped sample for cleaning the interior surfaces of our 150-micron sample-processing chambers. It's our version of a Martian carwash," said Chris Roumeliotis (room-eel-ee-OH-tiss), lead turret rover planner at NASA's Jet Propulsion Laboratory in Pasadena, Calif.
Before proceeding, the team carefully studied the material for scooping at a sandy patch called "Rocknest," where Curiosity is spending about three weeks.
"That first sample was perfect, just the right particle-size distribution," said JPL's Luther Beegle, Curiosity sampling-system scientist. "We had a lot of steps to be sure it was safe to go through with the scooping and cleaning."
Following the work at Rocknest, the rover team plans to drive Curiosity about 100 yards eastward and select a rock in that area as the first target for using the drill.
During a two-year prime mission, researchers will use Curiosity's 10 instruments to assess whether the study area ever has offered environmental conditions favorable for microbial life. JPL, a division of Caltech, manages the project and built Curiosity.
- 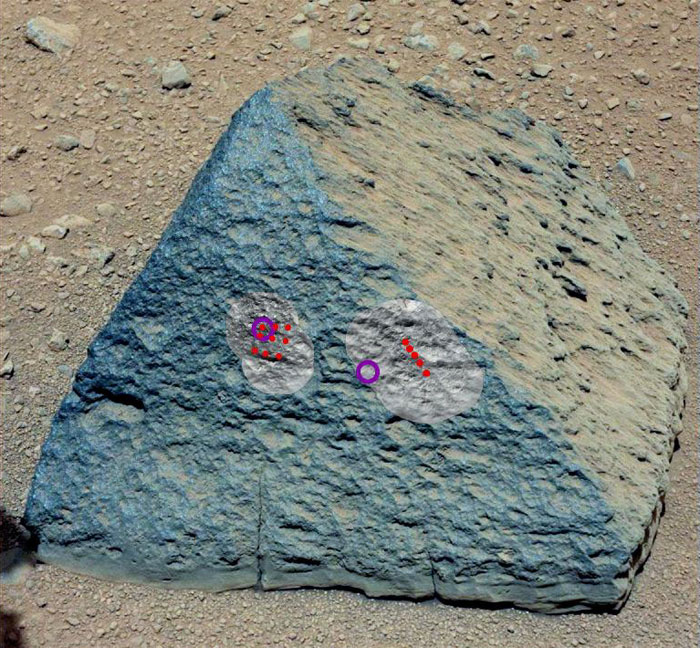 Target: Jake Matijevic Rock
This image shows where NASA's Curiosity rover aimed two different instruments to study a rock known as "Jake Matijevic." The red dots are where the Chemistry and Camera (ChemCam) instrument zapped it with its laser on Sept. 21, 2012, and Sept. 24, 2012, which were the 45th and 48th sol, or Martian day of operations. The circular black and white images were taken by ChemCam to look for the pits produced by the laser. The purple circles indicate where the Alpha Particle X-ray Spectrometer trained its view.
This image was obtained by Curiosity's Mast Camera on Sept. 22, 2012, or sol 46.
- 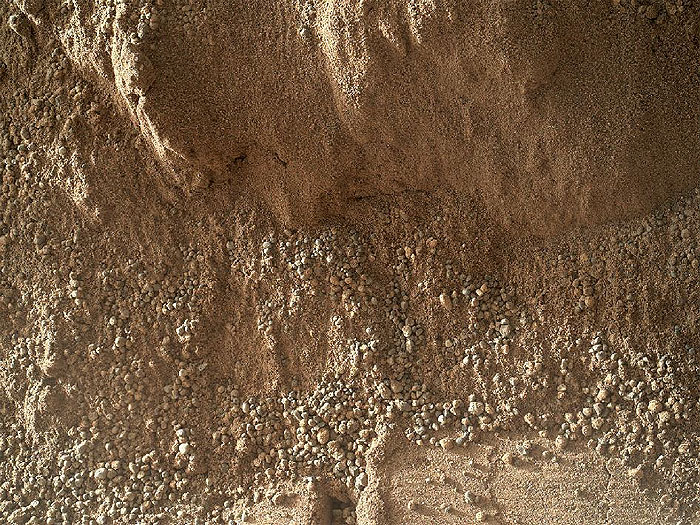 High-Resolution View of Cross-Section Through a Mars Ripple
This image shows the wall of a scuffmark NASA's Curiosity made in a windblown ripple of Martian sand with its wheel. The upper half of the image shows a small portion of the side wall of the scuff and a little bit of the floor of the scuff (bottom of this image). The prominent depression with raised rims at the bottom center of the image was formed by one of the treads on Curiosity's front right wheel.
The largest grains in this image are about 0.04 to 0.08 inches (1 to 2 millimeters) in size. Those large grains were on top of the windblown ripple and fell down to this location when the scuff was made. The bulk of the sand in the ripple is smaller, in the range below 0.002 to 0.008 inches (50 to 200 microns).
The full scuffmark is 20 inches (50 centimeters) wide, which is the width of Curiosity's wheel.
This image from the Mars Hand Lens Imager (MAHLI) is the product of merging eight images acquired at eight slightly different focus settings to bring out details on the wall, slopes, and floor of the wheel scuff. The merge was performed onboard the MAHLI instrument to reduce downlinked data volume.
The image was acquired by MAHLI with the lens about 4.7 inches (12 centimeters) from the target. The pixel scale is about 0.002 inches (50 microns) per pixel. The image covers an area, roughly 3 by 2 inches (8 by 6 centimeters). The image was obtained on Oct. 4, 2012, or sol 58, the 58th Martian day of operations on the surface.
- 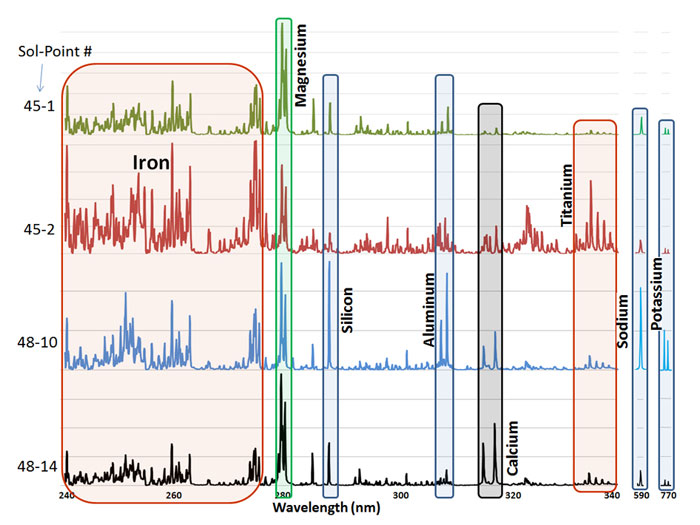 Teasing out Mineral Compositions
This graphic made from data obtained by NASA's Curiosity rover shows the ultraviolet portion of the spectrum of data obtained by the Chemistry and Camera (ChemCam) instrument, plus peaks for sodium and potassium, for four observation points on the rock "Jake Matijevic," which intrigued scientists. These were the outlying clusters in the previous figure. Chemcam analyzed a total of 14 points on the rock, zapping each one 30 times with its laser.
The colors correspond to the colors in the previous figure. Strong emission peaks or regions of peaks corresponding to major elements are highlighted and labeled. Observation point 45-1 is rich in magnesium and somewhat in iron, giving a composition suggestive of the mineral olivine. Point 45-2 is strongly enriched with iron and titanium, suggesting a metal oxide grain, possibly ilmenite. Point 48-10 is rich in silicon, aluminum, sodium and potassium, strongly suggestive of the mineral feldspar. Point 48-14 is high in calcium and has moderate magnesium, consistent with the mineral pyroxene. The top three spectra, or different wavelengths of radiation detected by the instrument, are averages of laser shots six through 30; the bottom spectrum is an average of laser shots 21 to 30. The spectra were obtained at ChemCam distances of 12.8 and 10.5 feet (3.9 and 3.2 meters) from the rock on Sept. 21, 2012, and Sept. 24, 2012 (sols 45 and 48).
- 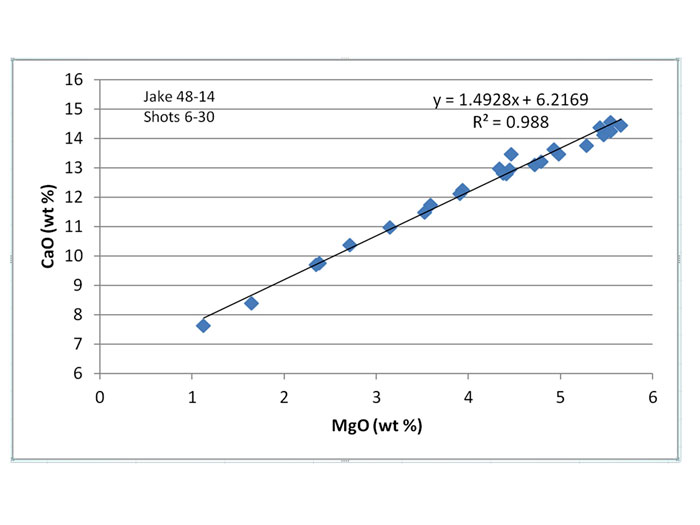 Likely Pyroxene Mineral Identified in 'Jake'
This plot shows how an observation point in the rock "Jake Matijevic" has a composition consistent with the mineral pyroxene, according to an investigation by the Chemistry and Camera (ChemCam) instrument on NASA's Curiosity rover. The data were obtained on Sept. 24, 2012, the 48th sol, or Martian day, of operations on the surface, when ChemCam zapped the Jake rock with its laser multiple times and analyzed the spectra, or different wavelengths of radiation, emitted from the plasma. This graph plots calcium oxide against magnesium oxide abundance determined from each of laser shots six to 30.
ChemCam's sixth laser shot is the first dot near near the lower left corner and successive shots move up and to the right. Taking into account the other element abundances along with those of calcium and magnesium allows one to determine that the laser beam was excavating into a material with composition consistent with diopside, a type of pyroxene mineral, at this location in the rock. The laser beam is approximately 0.014 inches (0.35 millimeters) in diameter and removes a layer on the order of 0.00004 inches (one micrometer) with each shot. The line in the plot gives the best linear fit to the data points.
- 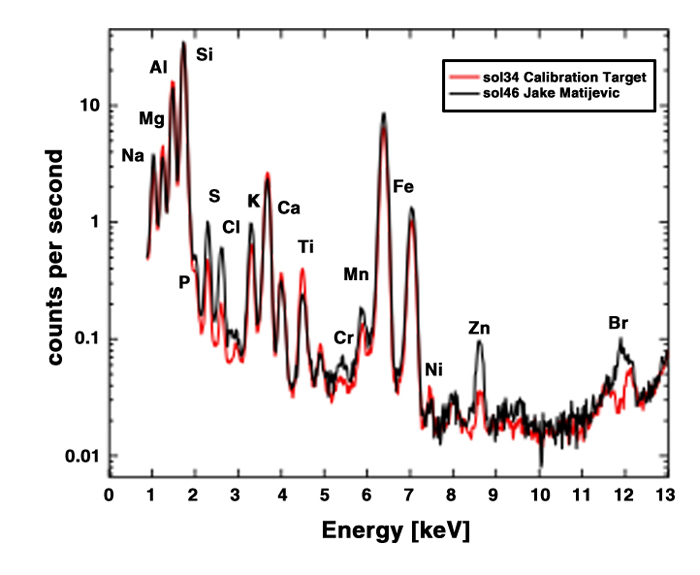 What's in Jake?
The graph shows the abundances of elements in the Martian rock "Jake Matijevic" (black line) and a calibration target (red line) as detected by the Alpha Particle X-ray Spectrometer (APXS) instrument on NASA's Curiosity rover. Compared to previously found rocks on Mars, the Jake rock is low in magnesium and iron, high in elements like sodium, aluminum, silicon and potassium, which often are in feldspar minerals. It has very low nickel and zinc. The salt-forming elements sulfur, chlorine and bromine are likely in soil or dust grains visible on the surface of the rock. These results point to an igneous or volcanic origin for this rock.
The Jake rock was targeted on Sept. 22, 2012, which was the 46th sol, or Martian day, of operations. The calibration target was targeted on Sept. 9, 2012, which was sol 34. APXS obtained its data by aiming alpha particles and X-rays at the rock and observing the energies of the X-rays that are emitted by the sample rock. These data are also known as spectra. The spectra on the rock and calibration target were taken for an hour at night, where the X-ray detector delivers its very best resolution, which means that the elemental peaks are the sharpest. Scales of the two different spectra were adjusted to make comparisons easier because each was measured at a slightly different distance.
The calibration target was a rock slab brought from Earth with a well-determined composition so that scientists can extract the composition of newly targeted Martian rocks very precisely.
All other Mars rovers -- Spirit, Opportunity and Sojourner -- were equipped with earlier versions of the APXS, which allows scientists to make detailed comparisons among rocks on different parts of Mars.
-

Different Jake Compositions at Fine Scale
This animated graphic represents compositions indicated by 350 spectra, or analyses of laser plasma light, observed on the rock "Jake Matijevic" by the Chemistry and Camera (ChemCam) instrument on NASA's Curiosity rover. Each spectrum is plotted along three axes in terms of its first three principal components and is color coded by observation point. ChemCam analyzed 14 different points on the rock, taking 30 spectra of each point. The first five spectra at each point were discarded because they were contaminated by surface dust. The remaining 25 spectra from each point cluster together, representing a unique composition for each of the 14 points. The unique compositions indicate that individual mineral grains and combinations of grains are observed, implying that mineral grains are in many cases larger than the 0.014-inch (0.35-millimeter) diameter of the laser beam. In a coarse-grained rock like Jake, the compositions of the outlier points can then be investigated to indicate what minerals are present in the rock.
-
Quelle: NASA
« Zum vorherigen Eintrag Zum nächsten Eintrag »
4381 Views
Created with page4