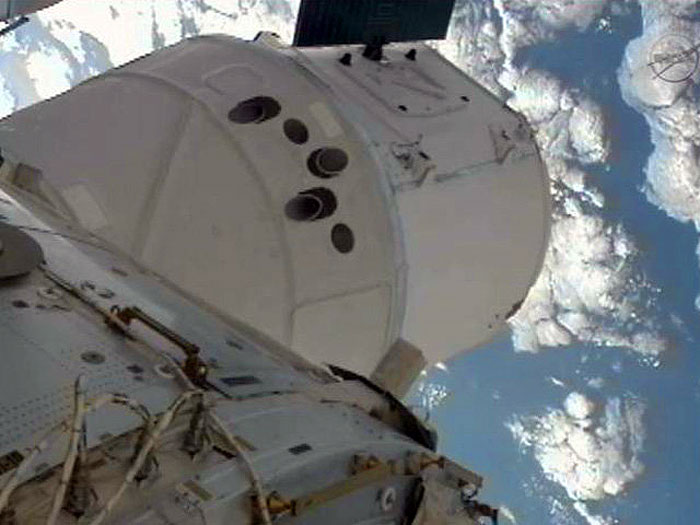 Space station astronauts opened the hatch to the Space X Dragon spacecraft today (see video below) to begin unpacking "882 pounds of supplies ... including 260 pounds of crew supplies, 390 pounds of scientific research, 225 pounds of hardware and several pounds of other supplies," NASA said.
The successful mission is critical, NASA says, to support scientific research on the station and allow NASA to learn more about what it takes to live and work for long periods in space. Dragon will be able to return frozen samples to Earth, and the capsule marks the first time NASA has had the capability to return large amounts of samples since the space shuttles stopped flying last year.
This week's mission was the first of at least 12 SpaceX will fly in a $1.6 billion contract with NASA. NASA is also working with other companies to expand shuttle competition. Oribtal Sciences is planning to launch its Antares cargo rocket and Cygnus capsule on a test flight later this year with an eye toward flying to the station next year. NASA is also working with Boeing and Sierra Nevada to develop space taxis for astronauts and cargo, and several other companies are building their own rockets for commercial space uses.
Quelle: NASA
-
Frams: NASA-TV-Video
-