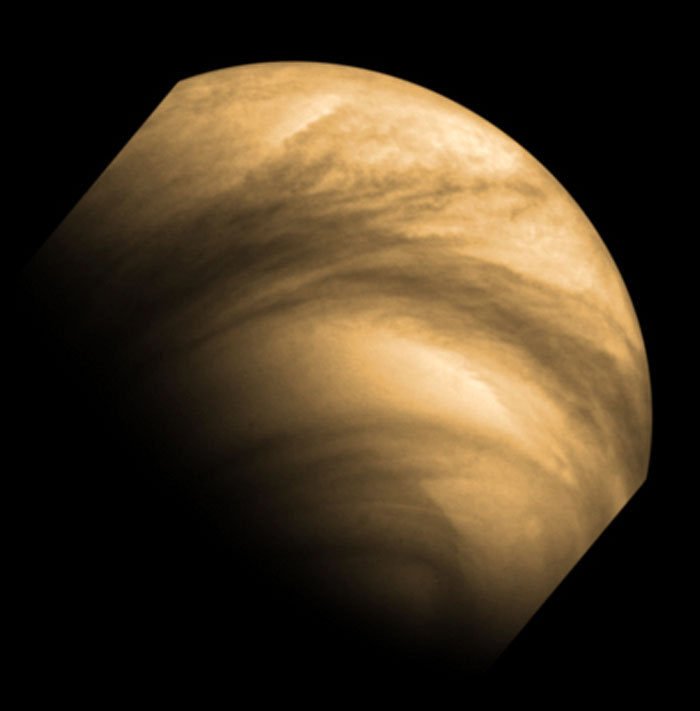 Clouds regularly punctuate Earth’s blue sky, but on Venus the clouds never part, for the planet is wrapped entirely in a 20 km-thick veil of carbon dioxide and sulphuric dioxide haze.
This view shows the cloud tops of Venus as seen in ultraviolet light by the Venus Express spacecraft on 8 December 2011, from a distance of about 30 000 km.
Much of the image is occupied by the planet’s southern hemisphere, with the south pole at the bottom of the frame and the equator close to the top. The visible top cloud layer seen in the image is about 70 km above the planet’s surface.
The observed pattern of bright and dark markings is caused by variations in an unknown absorbing chemical at the Venus cloud tops. It is abundant in the low latitudes (upper part of the image) that make this region look dark in UV.
In the brighter high latitudes (lower part of the image), the UV absorber is either in deficit or masked by a thick haze of a reflecting aerosol.
The shapes of the cloud top features show evidence of vigorous circulation and dynamics in the planet’s atmosphere.
At low latitudes, mottled cloud formations associated with turbulent activities are seen, while smooth, laminar flows are visible in middle to high latitudes.
The wind speed is derived from tracking cloud features as they whip around the planet faster than 100 metres per second. This ‘super-rotating’ atmosphere completes one circuit every four Earth days, in comparison to the planet’s surface, which takes 224 days to complete one revolution about its axis.
Quelle: ESA
« Zum vorherigen Eintrag Zum nächsten Eintrag »
4145 Views
Created with page4