This view of the giant solar prominence from the sun on Aug. 31, 2012, is created from two views by NASA's Solar Dynamics Observatory spacecraft using observations in both the 304 angstroms and 171 angstroms wavelengths.
CREDIT: NASA/SDO/GSFC 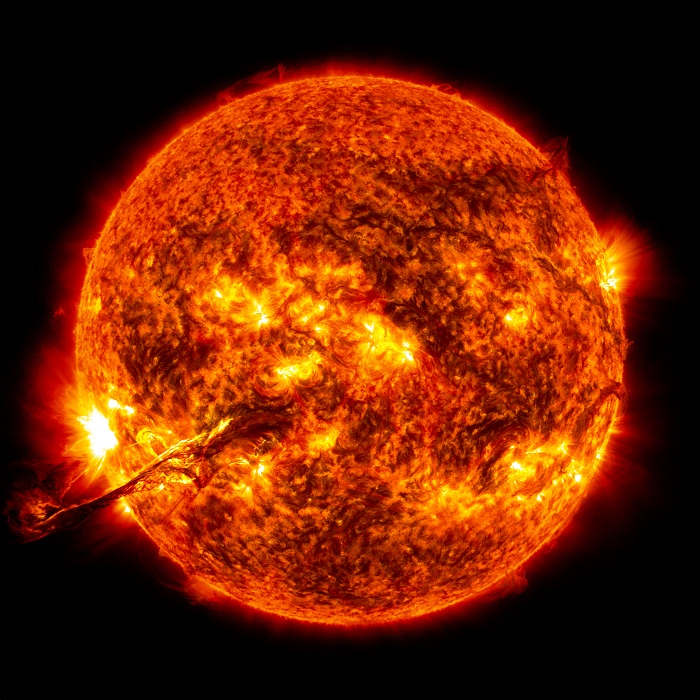 NASA spacecraft watching the sun have captured jaw-dropping pictures and video of a giant filament of super-hot plasma reaching up from the star's surface and erupting into space.

The filament was made of solar material that was ejected from the sun during an intense solar storm on Aug. 31. Flares are caused by increased magnetic activity on the surface of our star, and are becoming more common as the sun approaches a phase of peak activity in 2013.

The filament was spotted by NASA's Solar Dynamics Observatory, was likely gigantic, scientists say. The spacecraft and other sun-watching observatories recorded an amazing video of the giant solar filament and the solar eruption, called a coronal mass ejection (or CME), that followed.

"It is hard to easily judge the size of this 3D event with a 2D image at this angle, but this filament is probably on the order of 30 Earths across, 300,000 kilometers or 186,000 miles," said C. Alex Young, a solar physicist at NASA’s Goddard Space Flight Center in Greenbelt, Md. "When the filament expanded into space it quickly became more extended leaving the sun as a CME many solar diameters across, many millions of kilometers or miles."