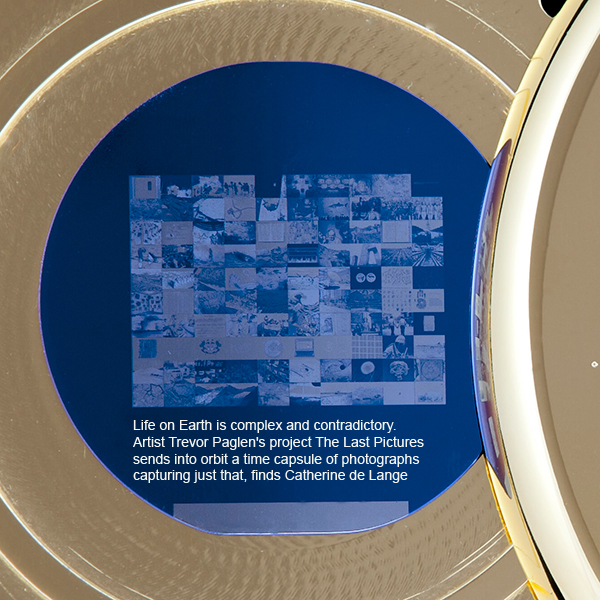 Satellites orbiting the Earth may be among the longest-lasting things humans have created. With this in mind, artist Trevor Paglen is launching into space a set of 100 photographs attached to a communications satellite. The photos are engraved on a chip that should last for billions of years. The Last Pictures may well outlive human existence on Earth. If they should be discovered millions of years from now, what will be made of them? All images courtesy of Trevor Paglen and Creative Time

The chip
Working out how to make a disc of images into a sound archive for billions of years was one of the project's biggest challenges. Paglen sought help from scientists at MIT who jumped at such an impractical challenge, says curator Nato Thompson. "Sometimes artists can provide scientists with questions they wouldn't come across in normal life," he says. The irony of sending the images into space etched on a telecoms satellite was not lost on Paglen. The satellite will transmit millions of images per hour back to Earth during its functioning lifetime – in stark contrast to the carefully selected photos it could carry deep into the future.
----
IT WAS September 1940. Four teenagers were walking a dog when they stumbled into a cave holding Palaeolithic paintings, a depiction of a time long forgotten. To this day these images, the famous Lascaux cave paintings remain enigmatic, with some historians suggesting that they were created deep underground as a kind of message for the future.
If we were to leave a similar gift for future civilisations, what would it be, and where would we hide it? After years of deliberation, artist Trevor Paglen has arrived at his own answer.
Paglen, who is also a keen amateur astronomer, is fascinated by the idea that about 36,000 kilometres above Earth is a ring of communication satellites that experience no atmospheric drag. In other words, these satellites can keep going in orbit for eternity. "If we take that seriously," says Paglen, "it means these are the longest lasting things we've ever made."
These satellites also speak volumes about the beings that created them, us. "To me they have come to represent a culture that can do extraordinary things - put things in space, explore questions about the beginning of time." But we also use this knowledge to destroy ourselves and the planet, he says.
In The Last Pictures, Paglen combines these ideas, creating his own Lascaux paintings - a series of 100 images that capture the contradictions and paradoxes of human nature, engraved on a communications satellite, in a format that could survive for billions of years.
It took Paglen several years to complete this challenge, seeking input from academics and other thinkers. A discussion with biologist Ignacio Chapela led the pair to overturn the over-simplistic DNA double helix as the image for life. Their counter-image of wild foliage draws on Darwin's anecdote at the end of On the Origin of Species, in which he describes how a tangled bank prompted him to reflect on the complexities of life. Other images are less literal, but together they portray the conflicts inherent to humanity.
Collectively, the mood of the pictures is melancholy; the work is a warning. "Particularly with the Mars landings right now, the mood of outer space has been very celebratory, but I think in some ways you could read this as the warning of celebration," says Nato Thompson, project curator from Creative Time, the organisation in New York that commissioned the work. There is a scepticism here that reflects our relationship with exploration and science, he says.
Because, of course, this project isn't just designed for alien populations of the deep future, but also for people who view the collection on Earth today. "We are making cave paintings for the future," says Paglen, "and I hope that sending this series of cave paintings into the vastness of time will allow us to see ourselves with a bit of distance, and to see where we are going."
The Echostar XVI satellite carrying The Last Pictures is due to be launched later this year
Quelle: NewScientist
« Zum vorherigen Eintrag Zum nächsten Eintrag »
4011 Views
Created with page4