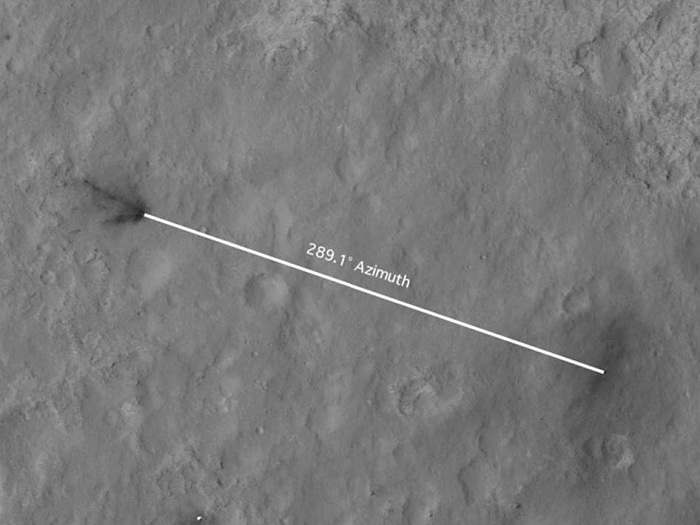 This portion of an image from the High Resolution Imaging Science Experiment (HiRISE) on NASA's Mars Reconnaissance Orbiter has been annotated to show the relative positions between NASA's Curiosity rover (right) and the impact site of its sky crane, or descent stage. The azimuth from north of the rover is about 290 degrees (north is up and zero degrees).

This information was used to determine whether the rover was pointed in the right direction to have captured an image of the plume from the crash of the descent stage using is rear-facing Hazard-Avoidance cameras. The gyrocompass on Curiosity indicates that the rover is pointed at 112 degrees, which, after subtracting 180 degrees since the picture was taken from the rear, gives the same direction of the sky crane crash to within 12 degrees. 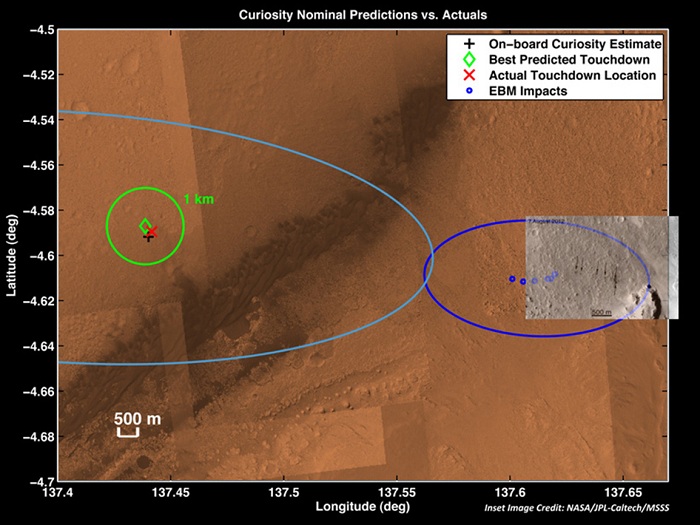 Zeroing in on Rover's Landing Site

The red "X" marks the spot where NASA's Curiosity rover landed on Mars. Early estimates made immediately after the rover landed (green diamond) indicated the rover touched down about one-and-a-half miles (2.4 kilometers) from the point it was targeting, to the left and out of sight on this graphic. This is well within the targeted landing region, called the landing ellipse, marked by the light blue line. Later after landing, images from the High Resolution Imaging Science Experiment (HiRISE) on NASA's Mars Reconnaissance Orbiter (not shown here) were able to pinpoint the rover's precise location, as shown by the red "X."

Before landing, the mission team had also made predictions about where six entry ballast masses released from the descending spacecraft would land, as indicated by the dark blue landing ellipse and six dots. These weights, which are made of a heavy metal called tungsten, were released to straighten the descending spacecraft out from the tilted position it needed to ride through the atmosphere.

The overlaid black-and-white picture shows the actual landing positions of the ballasts, as indicated by the dark scour marks they left on the surface. Arrows indicate the locations. That picture was taken by the Context Camera on Mars Reconnaissance Orbiter.

The background color image is from MRO.

A healthy Curiosity spent Sol 4, its fifth day on Mars, preparing for this weekend's planned "brain transplant"--transitioning to a new version of flight software on both of Curiosity's redundant main computers. The new software is better suited for Mars surface operations, such as driving and using Curiosity's robotic arm. The "brain transplant" will take place during a series of steps beginning this evening and continuing through Aug. 13. The new software was uploaded to the rover's memory during the Mars Science Laboratory spacecraft's flight from Earth. Key capabilities in the new software enable full use of Curiosity's powerful robotic arm and drill, and advanced image processing to check for obstacles while driving. This will ultimately allow Curiosity to make longer drives by giving the rover more autonomy to identify and avoid potential hazards and to drive along a safe path that the rover identifies for itself.

The flight team elected to defer further science activities until after the flight software transition is completed. Several Mastcam color images were downlinked. The mission's science team is busy analyzing images Curiosity has taken of its surroundings, and is discussing features of interest that they will investigate in a few weeks once initial checkouts of the rover and the landing site are completed.