This image shows the location (green) where scientists estimate NASA's Curiosity rover landed on Mars within Gale Crater, based on images from the Mars Descent Imager (MARDI). The landing estimates derived from navigation and landing data agree to within 660 feet (200 meters) of this MARDI estimate.

The red line shows the northern edge of the targeted landing region, a probability distribution defined by an ellipse.

The gray scale image is a mosaic from the HiRISE camera on NASA's Mars Reconnaissance Orbiter. The color image is from MARDI. 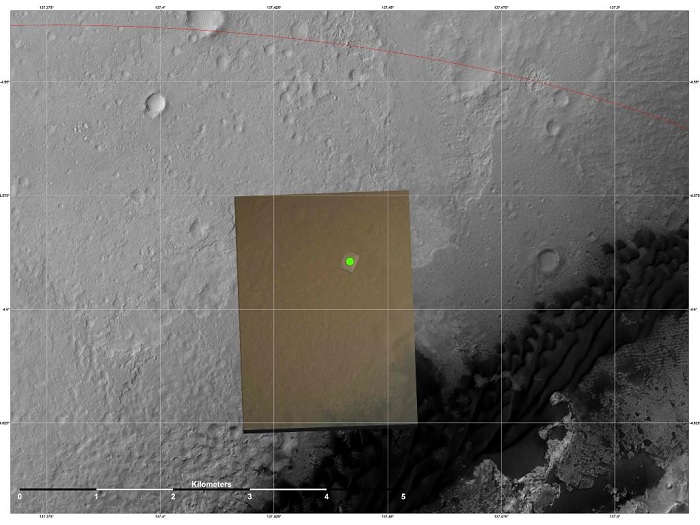 Curiosity Gets More Looks at its Surroundings; Health Checks Continue

Curiosity is healthy as it continues to familiarize itself with its new home in Gale Crater and check out its systems. The team's plans for Curiosity checkout today included raising the rover's mast and continued testing of its high-gain antenna, whose pointing toward Earth will be adjusted on Sol 2. Science data were collected from Curiosity's Radiation Assessment Detector, and activities were performed with the Rover Environmental Monitoring Station instrument. Curiosity transmitted its first color image from the surface of Mars, from the Mars Hand Lens Imager, or MAHLI, showing part of the north rim of Gale Crater. Additional calibration images were received from Curiosity's Navcam and Mastcam. All systems are go for deployment of the rover's remote sensing mast on Sol 2, followed by a 360-degree pan by the rover's Navcam. The Mastcam will also be calibrated against a target image on the rover. NASA's Mars Reconnaissance Orbiter returned a spectacular image of Curiosity's landing site, depicting the rover, parachute, back shell, heat shield and descent stage. Data were received from both NASA's Mars Reconnaissance Orbiter and Mars Odyssey.