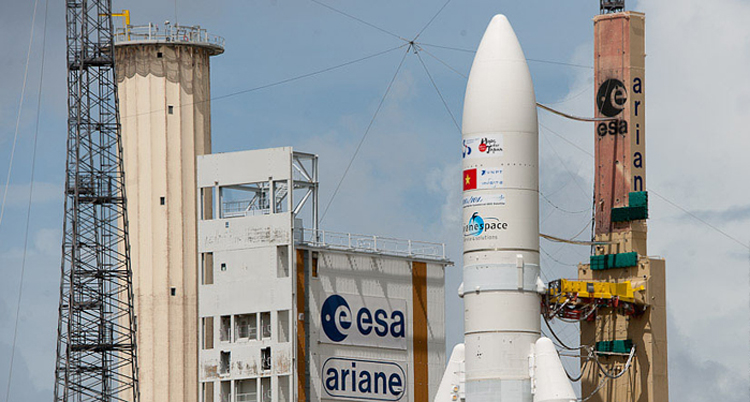 Arianespace’s mission with the JCSAT-13 and VINASAT-2 spacecraft is on track for liftoff tomorrow evening, following the Ariane 5’s rollout to its ELA-3 launch zone today at Europe’s Spaceport in French Guiana.

Riding atop its mobile launch table, this heavy-lift workhorse was transferred to the launch pad from the Spaceport’s Final Assembly Building – where Ariane 5 received its dual-satellite payload. With this rollout now completed, the final countdown will begin for a May 15 liftoff at the start of a two-hour launch window that opens at 7:13 p.m. local time in French Guiana.

This will be the second Ariane 5 flight of 2012, with a payload performance of over 8,300 kg. – which includes a combined mass of more than 7,500 kg. for JCSAT-13 and VINASAT-2, along with the launcher’s dual-payload dispenser system and associated integration hardware.

Ridding as the upper passenger in Ariane 5’s payload “stack” is JCSAT-13, which will be released at approximately 26 minutes into the flight. Produced for SKY Perfect JSAT Corporation, this telecommunications spacecraft will be positioned in geostationary orbit at 124 degrees East – from which it is to provide direct TV broadcast links to all of Japan as a replacement satellite for JCSAT-4A, and also will meet satellite relay coverage demands in Southeast Asia.

VINASAT-2 – which is to be operated by Vietnam Posts and Telecommunications Group – will be deployed from Ariane 5’s lower passenger position at just over 36 minutes after liftoff. From an orbital position of 131.8 degrees East, this satellite will provide fixed satellite service to Vietnam and neighboring countries.

Both payloads on this heavy-lift launch are Lockheed Martin spacecraft based on the company’s A2100 geosynchronous spacecraft series.  They are the milestone 100th and 101st commercial geostationary communications satellites built by Lockheed Martin.

Tomorrow’s mission is designed VA206, signifying the 206th launch of an Ariane family vehicle since 1979.