BlueShift Aerospace hopes the Oct. 21 launch of the 540-pound Stardust 1.0 will strengthen Maine's place in the growing industry.

BluShift Aerospace plans to launch its Stardust 1.0 rocket Oct. 21 to test its biofuel for rockets.

BRUNSWICK — Brunswick-based bluShift Aerospace plans to launch its 20-foot rocket from the former Loring Commerce Centre in October. The company hopes that the launch will serve as a springboard into building the aerospace industry in Maine.

Based out of Brunswick Landing – the site of the former Brunswick Naval Air Station – bluShift is manufacturing a biologically derived fuel to power rockets. The fuel is made entirely from materials that can be grown on a farm, offering a cheaper alternative to traditional fuel without sacrificing its efficiency. The bluShift team hopes to showcase their signature fuel and engine at the launch next month.

CEO Sascha Deri notes the difficulty of inspiring confidence in eco-friendly rocket fuel because of its perceived inefficiency.

“We learned early on in our research and development that having an engine that used a green fuel was not enough to inspire investment,” Deri said. “We had to demonstrate that we could match or beat the petroleum alternative.”

Years of planning will be on the line Oct. 21 with the launch of bluShift’s 20-foot test rocket, the Stardust 1.0. The company hopes to launch the 540-pound Stardust 4,500 feet into the air, about twice as high as the world’s tallest skyscraper, before landing safely back onto the ground at the Loring Commerce Centre, formerly known as the Loring Air Force Base. The trip will use 10 pounds of bluShift’s trademark fuel.

The rocket will be airborne for roughly 58 seconds, a tiny span of time compared with the years of work it took for engineers to get to this point. But Deri and his team understand the gravity of this moment.

“This launch is the culmination of six years of research and development by bluShift to develop a type of chemical rocket engine that is perhaps less understood than more common technologies” he says, hoping to demonstrate the functionality of a “bio-derived, carbon-neutral, high-performing and even less expensive than its liquid petroleum counterpart.”

While the Stardust will stay within the bounds of Earth’s atmosphere, Deri remains ambitious about the company’s future endeavors.

BluShift has earned the support of NASA as well as the Maine Technology Institute, a group founded by state legislation that awards grants and services with the goal of promoting new ideas and diversifying Maine’s economy. Brian Whitney, the president of MTI, expressed his confidence with the company, saying “We think (blushift) has a functional launch platform and the market opportunity to provide low-cost launch alternatives for CubeSats and university research projects that could position it for real growth.”

The market CubeSats, or nanosatellites, is expected to see significant growth over the next decade, making it an attractive investment for a group like MTI.

“Our mission at MTI is to provide the support these young technology companies need to gain traction, and we are excited about the potential for this company,” Whitney said.

Last spring, NASA awarded the group a Small Business Innovation Research grant of about $140,000 that helped the team develop their engine. This paved the way for MTI and a private investor to pour nearly $200,000 into the launch next month. 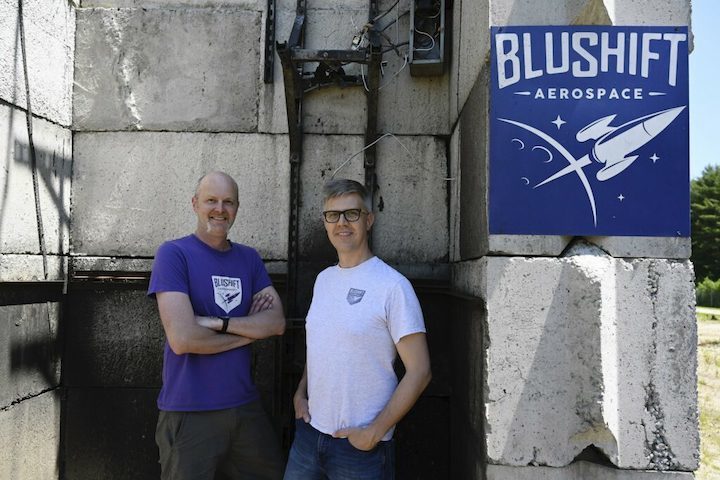 Using these grants and roughly $400,000 of their own funding since the company’s inception, bluShfit has been able to develop a rocket that they hope will demonstrate their engine’s supremacy during the Oct. 21 launch.

A SPACEPORT IN MAINE

Brunswick Landing has already been the subject of tentative plans to become the mission control of a Maine spaceport complex in the future. A bill put forward to the Maine Legislature in March would establish a Maine Spaceport Complex Leadership Council. If the bill is approved, development of the base would then be cleared to take off, with projected income and jobs created from the booming nanosatellite business projected to significantly outweigh the cost of construction.

“We envision a Maine that is known for its strong high-tech aerospace industry, creating high-paying, exciting jobs from Cumberland to Aroostook and Washington counties. The future of aerospace will have the words ‘Made in Maine’ on it,” Deri said.

The concept of a Maine SpacePort Complex received a shot in the arm Tuesday, when the U.S. Department of Commerce’s Economic Development Administration announced it was awarding a $444,009 grant to the Maine Space Grant Consortium.

“After almost seven months of living in this new world brought about by the coronavirus pandemic, it is clear that Maine’s economy is hanging in the balance. We must diversify our economy to make it more stable far into the future,” said Rep. Chellie Pingree, D-1st District. “The Maine SpacePort Complex will increase Maine’s participation in the global market for emerging nanosatellite and aerospace technology – a financial sector projected to bring between $500 million and $2.5 billion to Maine’s economy each year, along with 75,000 highly skilled workers over its lifetime. These new operations will drive growth and innovation in Maine, attract a much-needed younger population, and revitalize the former Brunswick Naval Air Station and the former Loring Air Force Base. Where Maine was once well-known for hosting squadrons before they flew over the Atlantic, our state will now be known for developing the vehicles that cross through space.”