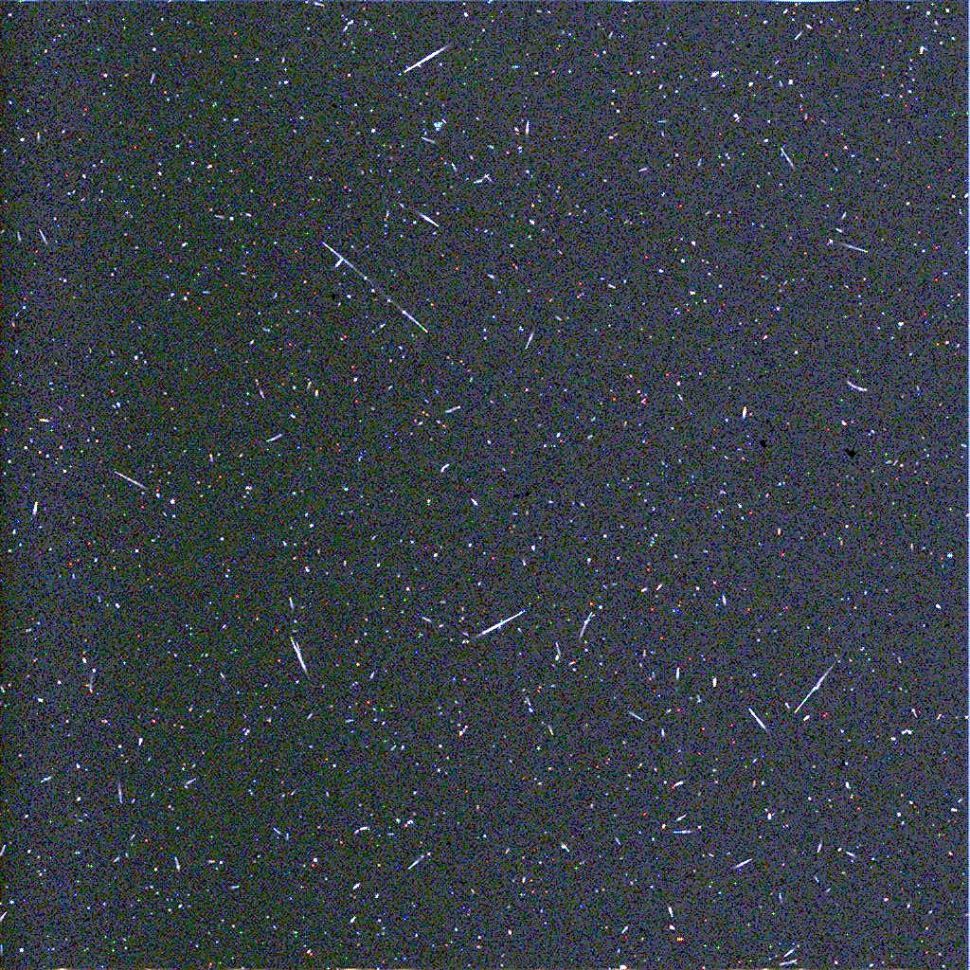 It's some next-level skywatching: Scientists are using images captured by NASA's InSight lander to look for meteors on Mars.

From a glance at the resulting images, the search seems straightforward: Countless streaks fill the sky. But squint a little, and the story turns out to be more quixotic. The images show mostly ghosts, the invisible made visible and the visible drowned out amid the illusions.

In fact, if you were on Mars as the stars rose, you would see a completely different world than the one on display in night images beamed home by InSight's cameras. "Essentially, in the images that we have so far, there's very little content that you would actually see with your eyes," Mark Lemmon, a scientist at the Space Science Institute who leads the meteor-watching project, told Space.com.

The images come from a device called the Instrument Context Camera, one of two perched on the InSight lander. The camera was included to help scientists understand the neighborhood in which the spacecraft deployed its two main instruments.

And one of those instruments, the seismometer, is the reason for the meteor search. This instrument is tuned to feel shuddering waves traveling through Mars; scientists can then parse that data to understand the interior structure and activity of the Red Planet.

Those waves could be spawned by marsquakes, the Martian equivalent of earthquakes. But they can also occur when meteorites slam into the planet's surface. Hence, scientists' interest in meteors: A calculation of how often such impacts occur on Mars would help researchers interpret the seismometer's data. 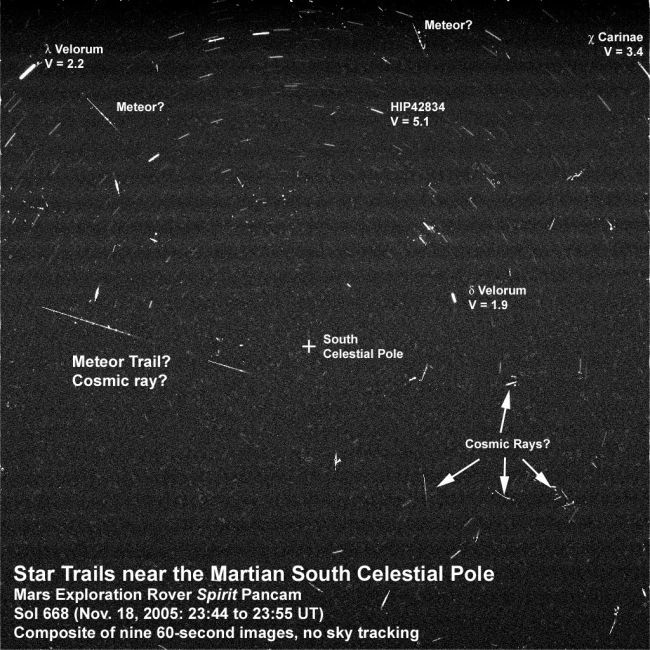 These efforts don't mark the first time scientists have watched for meteors in the Martian skies. NASA's Spirit rover, which roamed the Red Planet from 2004 to 2010, spent the summer of 2005 skywatching. That opportunity came thanks to the weather, which cleared so much dust off Spirit's solar panels that they were overproducing energy, creating a bounty that eventually became a burden.

"That was the cleanest [time] the rover spent on Mars," Lemmon said. "During that summer, there was so much solar power that they had to try and use it at night, because even if they were just dumping it, using that energy in the day was heating up the rover too much."

So, Spirit spent some nights skywatching, but scientists never spotted a meteor in that data. Given the scale of observations gathered total, that's pretty inconclusive: It could mean that fewer meteors arrive at Mars than scientists expected or that the team simply had bad luck.

InSight, which arrived in November 2018, took up the task as a low-priority project. The first images came from the lander's Instrument Deployment Camera, which is attached to the arm of the rover and can be pointed at specific locations. But for months now, that camera has had more pressing concerns than shooting stars. InSight's second key science instrument, a heat probe nicknamed the mole, has been troublesome. The mole is meant to dig itselfabout 16 feet (5 meters) below the surface, measuring heat transport in the Martian rock as it does.

The mole's dig has been slow going, however. In general, the probe has struggled to get traction in the rock. The instrument has even popped partway out of its burrow on a few occasions. Difficulties faced by the mole mean that the Instrument Deployment Camera has focused on providing engineers with visual evidence of what's happening with the probe and rescue attempts. There's no time for stargazing. 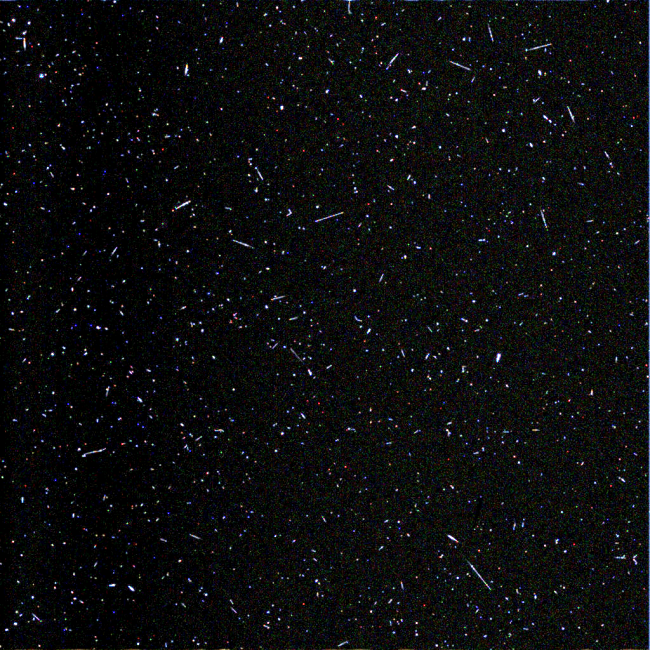 So, the scientists looking for meteors recruited the Instrument Context Camera instead. Like its companion, this camera was left over from the Curiosity rover, based on designs from 1999, then upgraded to see in color. (NASA's next Mars rover, launching this summer, will carry brand-spanking-new cameras, including zoom lenses and video capability.)

But unlike the Instrument Deployment Camera, the Instrument Context Camera is stuck in place, and it's equipped with a fisheye lens that distorts its view. It's not a natural skywatcher, to say the least. "It has the advantage that it's a larger field of view, so we see about a third of the horizon," Lemmon said. "It has the big disadvantage that it's not looking very high up in the sky. Obviously, if you were here on Earth looking for meteors, you wouldn't focus on the horizon."

Daytime images from the camera make its stargazing challenges evident: Mars itself fills most of the camera's field of view. Despite the seeming uniformity of the night images, the ground takes up most of the Instrument Context Camera's view, with no stars to see. Just a curving swath of sky remains above the red rock to be filled with stars after sunset. 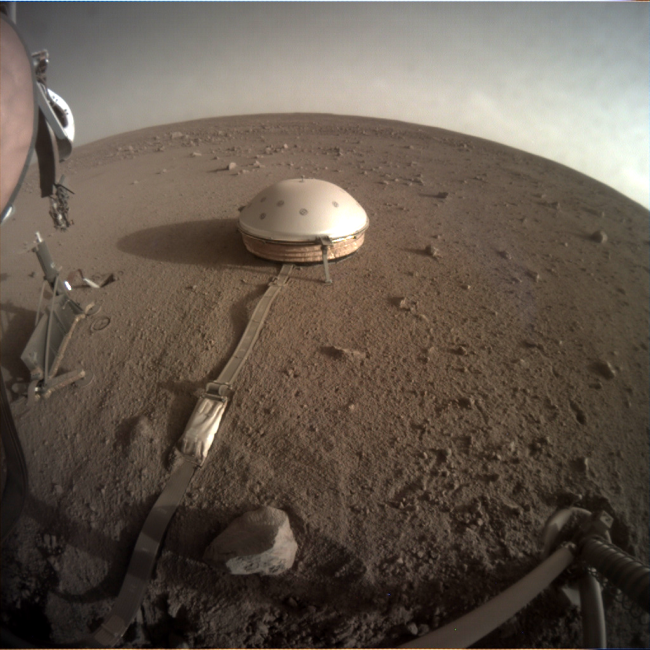 So far, although Lemmon checks each image for meteors, InSight's images have turned up empty. "There's a sense in which it's somewhat demoralizing," Lemmon said of scanning each image for potential meteors that are never there.

He said scientists do know what such objects ought to look like. Meteors would follow a curved path as seen by the fisheye lens. Aside from that, Lemmon said, meteors at Mars should look more or less the same as they do here on Earth. "You've got a range of things, from just a bright streak across the sky to a real fireball," he said. The carbon-dioxide-rich atmosphere might give a meteor an orange glow, but Lemmon said he isn't sure InSight's cameras could detect that color shift.

But most pinpricks of light in the InSight images come from an entirely different celestial phenomenon: cosmic rays, fragments of atoms that careen across the universe in all directions. Unlike the terrestrially pedestrian stars and meteors, cosmic rays are very difficult to photograph from Earth. Our atmosphere blocks many such particles from reaching the surface. A lucky camera on Earth set to take a long-exposure image may catch a cosmic ray here or there.

But Mars doesn't have Earth's atmosphere to bat away cosmic rays, leaving the Red Planet primed to host a cosmic-ray detector, said Justin Maki, an imaging scientist at NASA's Jet Propulsion Laboratory in California. That's what every bright spot below the invisible curve of the horizon in the Instrument Context Camera's night images is, the fingerprint of a cosmic ray. "The universe is kind of awash with cosmic rays," Maki said. "You don't think about them much, because they mostly just pass through you or pass through the environment." 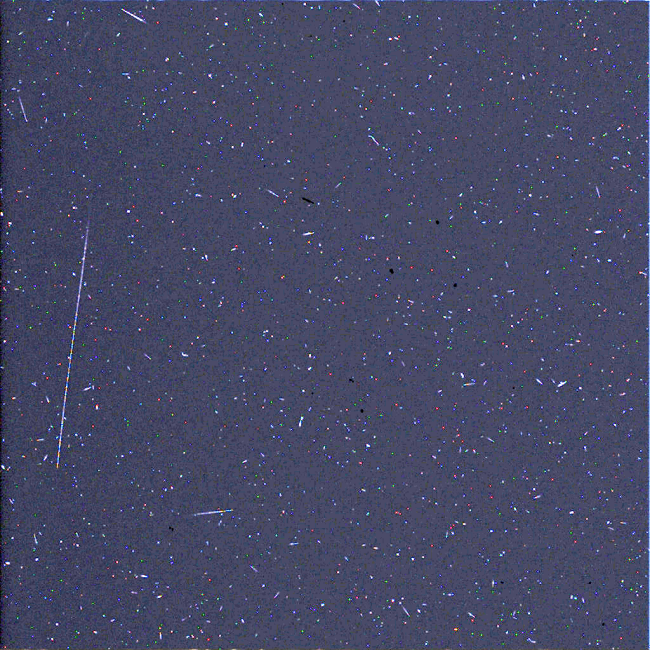 While they won't affect InSight's other data, the cosmic ray images could feed scientists' curiosity about these particles, particularly their frequency at Mars. The length of a streak speaks to the type of particle involved — longer streaks are typically high-energy protons or muons, Lemmon said — and the angle at which the cosmic ray is traveling. "Some of these are coming from the sun. Some of them, we don't know where they come from," Maki said. (The colors on display merely reflect what color of sensor the cosmic ray happened to hit.)

But the eerie would-be meteor-watching photos won't keep flowing back from Mars. Time is running out for getting skywatching photos from the Instrument Context Camera, Lemmon said, because the infamous Martian dust-storm season will soon begin, blotting out the horizon. "Within a couple of weeks, I don't think that we will be able to see even a bright star that low in the sky," Lemmon said.

They'd still see the cosmic rays, of course. But they've seen plenty of those.

Mars-Chroniken - This picture is from Mars. It's probably not what you think.
1004 Views
Created with page4