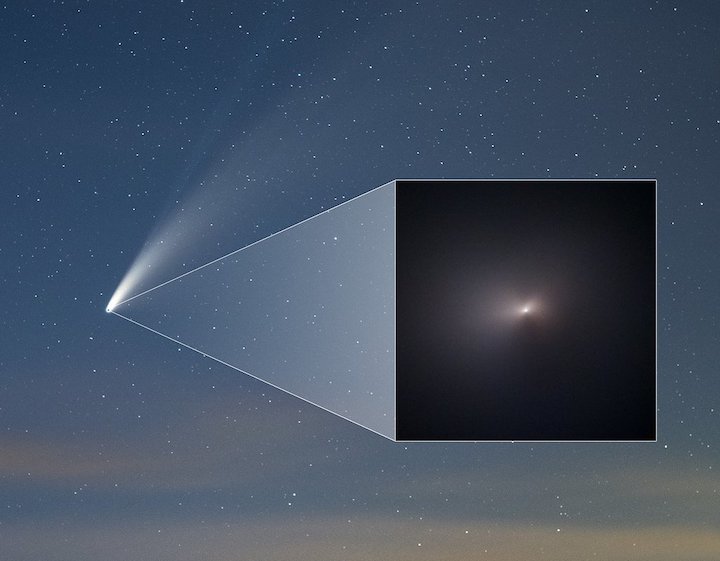 This ground-based image of comet C/2020 F3 (NEOWISE) was taken from the northern hemisphere on July 18, 2020. The inset image, taken by the Hubble Space Telescope on August 8, 2020, reveals a close-up of the comet after it passed by the sun. Hubble's image is centered on the comet's nucleus, which is too small to be seen, as it is estimated to measure no more than 3 miles (4.8 kilometers) across. Instead, the image shows a portion of the comet's coma, the fuzzy glow, which measures about 11,000 miles (18,000 kilometers) across in this image. Comet NEOWISE will not pass through the inner solar system for another nearly 7,000 years.

On March 27, a spacecraft named NEOWISE identified a bright comet fast approaching the sun. As comets travel closer to the sun, their icy mantles evaporate and dust escapes to create long tails; at one point, the newfound Comet NEOWISE's tail stretched more than 10 degrees across the sky, which is equivalent to a line of 20 Earth moons.

"Because comets are made of ice, they are fragile," says Qicheng Zhang, a graduate student at Caltech who studies comets, "and we weren't entirely sure whether Comet NEOWISE would survive the journey around the sun."

Not all comets do survive such a journey. For instance, Comet ISON completely broke apart in 2013 due to the sun's blistering heat.

Luckily, Comet NEOWISE, officially designated C/2020 F3 (NEOWISE), did emerge from behind the sun on July 3 and, in the following weeks, dazzled the public and amateur astronomers who caught dramatic photos of the shooting star lookalike. Comet NEOWISE was the brightest comet visible in Northern Hemisphere dark skies since Hale-Bopp in the mid-1990s.

For Zhang, this was an opportunity to study how the sun affects comets. He and his colleagues applied for and won time on NASA's Hubble Space Telescope, which had the best resolution for studying the comet in detail. The Hubble observations, which were taken on August 8, did not reveal any of the expected fragmentation of the three-mile-wide comet, but did show at least one, and possibly two, jets of escaping material. Jets form when solar heating warms ices beneath the surface, and jets can initially point in any direction before they are deflected into tails directed away from the sun.

"The jets contain material from deep inside the comet," says Zhang. "We are able to see what all this buried material looks like."

Zhang adds that further analysis of Hubble's color and polarization data on the comet will help piece together precisely what makes up the jets.

The heart of the comet, its icy nucleus, is too small to be seen by Hubble. Instead, the Hubble image captured a portion of the vast cloud of gas and dust enveloping the nucleus, which measures about 11,000 miles (18,000 kilometers) across in the new photo.

NEOWISE has been scanning the skies for near-Earth and other asteroids and comets since 2010. The spacecraft, originally launched as the WISE mission (Wide-field Infrared Survey Explorer), surveyed the entire sky twice in infrared light from 2010 to 2011, uncovering not only comets and asteroids but also black holes, galaxies, stars, and more. In 2013, after a two-year hibernation, the mission was reactivated and renamed NEOWISE (Near-Earth Object WISE) and was dedicated to the detection and characterization of near-Earth and other asteroids and comets. Since reactivation, NEOWISE has measured the infrared light from over 37,000 asteroids and comets. Comet C/2020 F3 NEOWISE is the 15th comet discovered by the reactivated mission; a 16th comet, Comet C/2020 P1 NEOWISE, was discovered on August 2.

"The NEOWISE infrared measurements of comets and asteroids are unique in that they enable astronomers to estimate the sizes of these objects, which cannot be done as accurately with visible-light measurements," says Roc Cutri, the NEOWISE Science Data Center lead scientist at IPAC, an astronomy center at Caltech, where the NEOWISE mission data are processed and archived.

This video displays the rotation of comet C/2020 F3 (NEOWISE) shortly after it passed by the sun. The two images were taken 3 hours apart on August 8, 2020. Two jets emerging from the comet's nucleus are being fanned out by the comet's rotation.