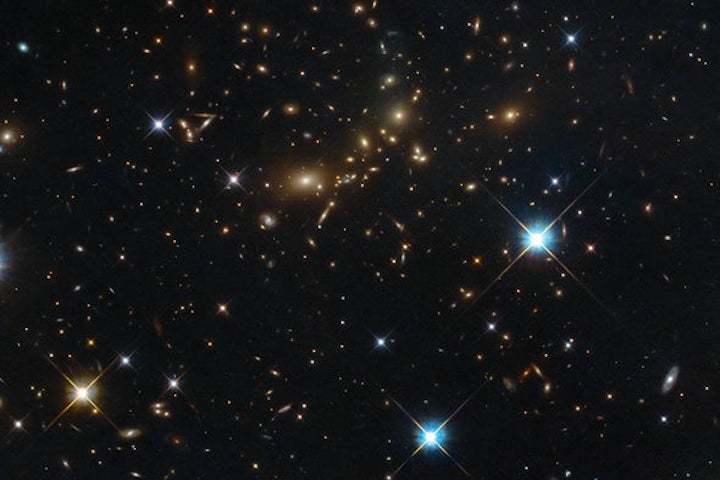 Some 13.8 billion years ago, the universe as we know it began in the instant of time we call the big bang. At this moment, very hot and dense energy and matter suffused the cosmos, fueling the expansion of space. In the first split second afterward, many physicists posit, the universe went through a phase of extremely rapid expansion: a process called inflation. One of the most marvelous predictions of this theory is that the arrangement of all the galaxies throughout the universe—the placement of all the “stuff” in the cosmos at the largest conceivable scales—was set by events taking place at the smallest possible level of measurement: the quantum realm. Proponents of this idea, however, have long faced a tricky question: Can we ever confirm this microscopic origin story if all we can see today are the macroscopic results?

“The question of the quantum origin of cosmic structure is one of the most interesting aspects of all science,” says Juan Maldacena, a string theorist and cosmologist at the Institute for Advanced Study in Princeton, N.J. Maldacena and other researchers have yet to find a conclusive answer. But new work offers hope for a resolution, suggesting that certain telltale patterns in the distribution of galaxies could at last put inflation to the test.

Inflation predicts that we should find an almost perfectly random spatial distribution of galaxies wherever we look in the sky. According to the theory, this randomness comes about because the seedbed on which the galaxies grew had a purely random source itself: fluctuations of the so-called quantum vacuum. The quantum vacuum is a manifestation of the quantum fields that fill the universe. It is, counterintuitively, not exactly empty, either. Within it, short-lived excitations of the fields continuously arise and then vanish, creating a kind of quantum static that fills the void.

Without cosmic expansion, this static would not exhibit any long-lived structure. In accordance with inflation, however, the incredible expansion of space should have magnified those microscopic quantum blips to macroscopic size. As they grew, the fluctuations lost the ability to disappear back into the vacuum haze and “froze” into permanent existence. They became what physicists call “classical,” meaning they no longer follow the laws of quantum mechanics but instead evolve in a definite way, according to gravity, as spelled out by Einstein’s general theory of relativity. Thus, after inflation ended, the imprint of that frozen static should have remained—appearing as patterns of higher- or lower-than-average density in the otherwise uniform spread of matter throughout the universe. These patterns helped guide the formation of galaxies, which coalesced in higher-density regions as matter further clumped together under the attractive force of gravity.

This theoretical tale leads us to the remarkably poetic conclusion that the largest, most immutable structures in the universe—galaxies and galaxy clusters—must come from the smallest and most ephemeral quantum oscillations. Yet is this beautiful story actually true? There are, of course, other possibilities: Perhaps rather than emerging from a quantum vacuum, inflation was sparked by some sort of long-lived quantum particles. Or maybe some process even earlier than inflation somehow placed a classical pattern on the infant universe that inflation magnified but did not create. Either of those scenarios would mean a radical change to our understanding of what occurred in the earliest moments of existence.

IN SEARCH OF A SIGNAL

Cosmologists have pondered this mystery—and, more importantly, how to solve it—ever since the development of inflationary theory in the early 1980s. Most of this work has sought to determine what direct evidence for the quantum vacuum origin would look like and whether it could conceivably be measured. So far no one has found a satisfying answer. And many doubt that this approach can work. “It’s very hard. It’s a very small effect,” says Olivier Doré, a cosmologist at NASA’s Jet Propulsion Laboratory, who has carefully studied the problem. Doré and his collaborators have argued that inflation would squash any telltale signs of the quantum vacuum well below the level at which real measurements could hope to spot them. “It’s hard to think of something that could be measured,” he says.

If we cannot hope to see direct evidence of the quantum vacuum, researchers can approach the problem from the other way around and look for evidence against the quantum-vacuum origin story. Doré and Maldacena, who has also argued that the direct approach seems unpromising, both point to a new preprint study by cosmologists Daniel Green of the University of California, San Diego, and Rafael Porto of the German Electron Synchrotron (DESY). This work, now accepted for publication in Physical Review Letters, suggests that such evidence could be within reach via careful studies of any nonrandom features within the universe’s large-scale structure.

If, in fact, we do live in an inflationary universe in which galaxies grew from quantum chaos, then we should expect to find them randomly scattered throughout space. Cosmologists have already found some nonrandom features in large-scale structures. But  these observations can be explained through “postinflationary” processes, such as gravity’s influence on the growth of galaxy clusters. The challenge is to find signs of nonrandomness that can only be accounted for by events in the very early universe. Such “primordial” signs could reveal fine details of how inflation played out—or could lead us to a radically new picture of what happened during that period.

Researchers can test for randomness, for example, by studying the geometric shapes formed by sets of galaxies. Any three visible galaxies form a triangle across the sky, with the galaxies at the corners. The question is: How many times would three other randomly chosen galaxies form the exact same sort of triangle? A methodical search that tries to account for every triangular shape and to cover every point in the sky could conceivably reveal whether cosmologists can expect to find disparate galaxies more often in any particular three-point configuration. The existence of one or more “preferred” triangles—or a preference for any other geometric shape, for that matter—would suggest a nonrandom pattern. Cosmologists would then have to ask, “What could cause such a thing?”

Green and Porto contend that if the seedbed for cosmic structure did not come from the quantum vacuum—if it instead grew from a nonvacuum quantum state or from a classical state whose origin predates inflation—then those extra ingredients would change the pattern of that initial galactic seedbed. These new patterns would show up as certain telltale preferred shapes in the large-scale structure. If astronomers cannot find evidence that those configurations occur more often than random chance would allow, then the universe’s large-scale structure cannot have come from those other origins.

Crucially, according to Green, there is a real hope that astronomers will see the evidence he and Porto have outlined, provided it exists. The first step is to detect new signs of nonrandomness, whether they are caused by primordial inflation or later processes. Doing so may require improving the current state of the art in mapping the positions of galaxies by a factor of 100, Green estimates. A lofty goal, to be sure, but one that would be far easier to achieve than measuring the minuscule size of the potential signals studied by Doré and others.

If observers succeed at detecting nonrandomness, next they will seek out signs linking it to inflation rather than subsequent events. This step is the main difficulty, Green says. Even here there is hope, however. The types of preferred shapes that he and Porto have studied should be as noticeable as others because of effects that occurred later in cosmic time. To put it simply, they would be relatively easy to see, not hidden away as some small adjustment to a bigger value. “You don’t have to look for a needle in a haystack,” Porto says. In the absence of any detectable hint of primordial nonrandomness, theorists would be hard-pressed to come up with confounding effects or experimental imperfections that could mask what should be an obvious signal. For that reason, the lack of any sign of Green and Porto’s preferred shapes could be evidence in favor of inflation and the quantum origin of cosmic structure.

Doré agrees that the search for nonrandom signs offers an exciting prospect, because the needed measurements, while not guaranteed, seem feasible. In the next five to 10 years in particular, astronomers will create unprecedentedly high-fidelity maps of galaxy distributions from several next-generation surveys and telescopes—such as the NASA satellite mission SPHEREx, which is set to launch in 2024. Although such work is not guaranteed to answer this question of cosmic quantumness, Doré thinks the time is right to contemplate the inquiry. “It’s hard to predict, but I think it’s a very dynamic time for these questions. I think that there are a lot of new ideas appearing, and I’m hopeful that something important will emerge.”

Porto agrees. “There’s lots of data,” he says, and “lots of work to do.” Researchers who want to unravel the evolution of the universe can now bring tools from particle physics, data science and the search for gravitational waves. When you put it all together, Porto says, “this is the most exciting time to be.”

Astronomie - Did Galaxies Grow from Quantum Static? A new test could determine whether large-scale cosmic structures have microscopic origins
261 Views
Created with page4