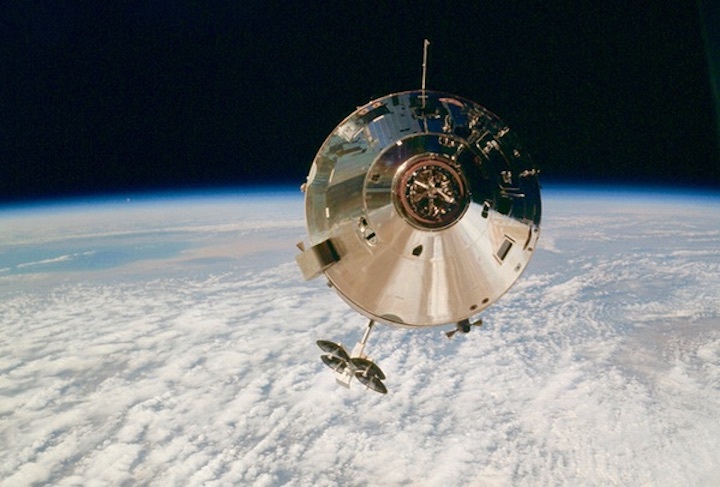 During the Apollo program NASA officials tried to plan for every possible failure that could happen during a mission. Some of the failures might not even be catastrophic: “mission failures” rather than crew fatalities. One such possibility might be the Saturn rocket’s third stage engine not firing to take the crew to the Moon. In that case the spacecraft would be restricted to Earth orbit. The crew could still return, but they could not perform their primary mission. NASA officials sought to find other things that a crew could do so that the mission would not be a complete waste. They wanted to take their lemons and make lemonade. Surprisingly, one of the things they did was plan to conduct reconnaissance operations in Earth orbit, which brought them into contact—and sometimes conflict—with the secretive organization that did that on a regular basis.

Starting at least as early as spring 1970 for the Apollo 13 mission, NASA began planning for what it referred to as “Earth Orbital Contingency” missions. The agency concluded that there were few useful things other than taking photographs that the astronauts could do in Earth orbit. They therefore prepared contingency photographic missions for Apollo 13, 14, and 15 at that time.

In May 1971, Apollo Program Director Rocco Petrone wrote his boss, Dale Myers, the Associate Administrator for Manned Space Flight, about the Apollo 15 Contingency Mission planning. Petrone explained that with Apollo 15, the spacecraft would be carrying a couple of cameras that would be useful for Earth photography. These were a 3-inch (7.6-centimeter) focal length stellar-index mapping camera, and a 24-inch (60-centimeter) focal length panoramic camera manufactured by Itek. The Apollo Panoramic Camera was a derivative of an aerial reconnaissance camera known as the IRIS II, which was itself a derivative of the KA-80 camera, originally designed for use on the SR-71 spyplane and later the U-2. It was an optical bar design, meaning the camera was laid out straight but used an image-bending mirror, like a periscope, that enabled it to photograph a long thin image on a long strip of film at high resolution, and yet still remain compact enough to fit within the camera bay of an airplane or a spacecraft. It had a 61-centimeter focal length and from a 425-kilometer orbit could produce ground resolution of between 7.6 to 10.7 meters, meaning that a photographic interpreter could spot and identify large objects like buildings and some ships. At the time, American reconnaissance satellites fell into two general categories: “search” systems with resolution of about 2–3 meters and “spotting” systems with resolution as good as 15 centimeters. Although not as powerful as the highly classified reconnaissance systems, the Apollo camera would have returned pictures far better than any ever made public before.

Petrone explained that because the Itek camera was designed for operating 60–80 nautical miles (110–150 kilometers) above the Moon, it was equipped to provide forward motion compensation for the photographs that it took. This fixed setting on the camera required the Apollo spacecraft to operate in a 230-nautical-mile (425-kilometer) Earth orbit. The orbital inclination would be increased to 40 degrees. The astronauts would also optimize the orbit to obtain good solar illumination over the United States. Petrone noted that aerial cameras were normally equipped with filters to eliminate haze and blue scattered light that could degrade system performance. The Apollo Panoramic Camera lacked such a filter and this would therefore degrade the camera performance.

Soon after Petrone wrote his memo, NASA Administrator James C. Fletcher wrote a letter to Henry Kissinger, Richard Nixon’s national security advisor and then the most powerful foreign policy official in the United States, explaining the contingency plan. Fletcher explained that this contingency plan “would offer a unique opportunity to acquire earth survey photography in support of the NASA Earth Resources Survey Program,” and would be restricted to covering only United States territory. (The memos can be downloaded here.)

The memos don’t explain an important fact: that any such mission would probably result in unwanted media attention to the United States’ reconnaissance satellite program. After all, the photographs would be released and would reveal significant detail, prompting people to assume that similarly detailed photographs already existed of America’s adversaries.

The National Reconnaissance Office, which ran the United States’ satellite reconnaissance program, had already taken efforts to avoid embarrassment by NASA astronauts. Beginning with the Gemini missions, the National Photographic Interpretation Center, which analyzed reconnaissance satellite photography, had reviewed the photographs produced by the astronauts to make sure that they did not reveal sensitive information, like the existence of the secret test facilities at Groom Lake, aka Area 51. But handheld cameras on the Gemini and early Apollo missions were incapable of producing good quality ground photography. The Apollo Panoramic Camera was far more powerful.

In 1972, as NASA prepared for the last Apollo mission to the Moon, the agency sought to coordinate its plans for a contingency mission with the intelligence community, and created a bit of a stir in the process. The Apollo 17 spacecraft was carrying the same Apollo Panoramic Camera which had also been carried aboard Apollos 15 and 16. But unlike previous missions, because of its unique trajectory, Apollo 17 could possibly overfly China and the Soviet Union, and the astronauts could return politically sensitive photography. NASA wanted the astronauts to take photographs of these areas.

The intelligence community was naturally sensitive to this issue. They were involved in a rather strange game of denying the obvious. Although it was widely known that the United States launched reconnaissance satellites, the official US government position was to not comment on satellite reconnaissance at all in order to not create any more questions, or international controversy, about the subject. In fact, the US government had even invented a euphemism—“national technical means”—in order to avoid referring to satellite reconnaissance in arms control negotiations. Photographs taken by American astronauts of the Soviet Union and China, some taken at relatively good resolution, could prompt awkward questions about American policies and capabilities. This was amplified by the particular capabilities of the Apollo Panoramic Camera.

In October and November 1972, NASA contacted the National Reconnaissance Office and sought permission to take photographs of China and the Soviet Union using the Panoramic Camera and other cameras during an Apollo 17 contingency mission. A letter by Major Harold S. Coyle Jr. to the director of the National Reconnaissance Office, John McLucas, dated November 9 indicates that the NRO had reservations about NASA’s proposal. According to Coyle, the Office of the Secretary of Defense also was concerned about the proposal and recommended that NASA take a “more conservative approach”—i.e. not take any photographs of the Soviet Union or China during an Apollo contingency mission. NASA also approached both the State Department and the Arms Control and Disarmament Agency for their comment. The latter agency was concerned that NASA’s plan could impact the Strategic Arms Limitation Talks—NASA was, after all, proposing something that would prompt questions about “national technical means.”

In addition to proposing something that made intelligence agency officials nervous, NASA also apparently ruffled some feathers by not following the proper procedures and submitting its plan to each agency separately rather than via a coordinating committee that had been created for just such requests. In fact, by this time NASA apparently had a reputation for “going out of channels” for such requests, which annoyed those in the intelligence community.

In response to the various concerns expressed by several agencies, NASA redrafted its proposal, but still sought to take images of so-called “denied areas.” They then took their revised proposal to a special committee involved in approving all overhead photography plans. Unfortunately, those records have not yet been publicly released, so it is unclear if NASA obtained final approval of its plans to photograph parts of China and the Soviet Union if Apollo 17 was unable to go to the Moon.

This was not the first time that NASA had annoyed the intelligence community about astronaut photography, and it certainly would not be the last. In fact, since the mid-1960s there had been an ongoing negotiation between NASA and the NRO over civilian use of NRO reconnaissance technology. This included whether NASA would fly a civil version of the Manned Orbiting Laboratory for astronomy, and the use of a converted GAMBIT-1 reconnaissance camera for photographing the Moon at high resolution. Those negotiations were classified, but an Apollo contingency mission that produced good quality Earth photographs could push the subject into the open.

Fortunately, Apollo 17 flew without a hitch. But the problem never went away. Only two years later, as NASA prepared to launch Skylab into orbit, the agency sought approval from the top secret “40 Committee,” which oversaw approval of satellite and aircraft reconnaissance missions, to fly the Earth Terrain Camera, which had a resolution of 10 to 20 meters. Although not as good as the Apollo Panoramic Camera—which was never used in Earth orbit—the Earth Terrain Camera was substantially better than any previously produced civilian imagery of the Earth. What further complicated the issue was that NASA would be taking pictures of non-American territory, possibly including some areas of the Soviet Union and China.

Donald H. Steininger, the CIA’s Assistant Deputy Director for Science and Technology, wrote a long memorandum to his boss, the Director of Central Intelligence, explaining the situation. Although Steininger recommended that they approve NASA’s request, he also suggested that the policy implications of releasing imagery of foreign territory be discussed within the intelligence community. Such a release, he warned, could result in challenges to the United States’ current program for conducting satellite reconnaissance. The issues were complex and required coordination between agencies—and of course the opinion of many within the American intelligence community was that they wanted the whole issue to go away. The last thing they wanted was more attention on American reconnaissance capabilities and operations. (The memo can be downloaded here.)

Members of the intelligence community had reason to be concerned. In 1974, astronauts aboard the Skylab 4 mission photographed the top-secret airfield at Groom Lake in Nevada. Groom Lake, often euphemistically referred to as “Area 51”, is the site of classified aircraft research and is where both the U-2 and Blackbird spyplanes were first flown. Despite apparently explicit orders not to do so, the astronauts took a photograph of the airfield. This prompted a debate within the government after the film was returned to Earth. NASA wanted the photograph released in keeping with its mission of being open and public about its activities. Members of the intelligence community wanted the photograph classified because it depicted a secret facility. Other members of the government questioned the precedent of classifying previously unclassified material (see “Astronauts and Area 51: the Skylab Incident”, The Space Review, January 9, 2006.) The photograph was placed in NASA’s archive of Skylab photographs. But nobody noticed.

NASA strove to operate in the open as much as possible, and occasionally its actions got close to those of agencies that chose to operate in the dark. The intelligence community had to try to make lemonade out of the lemons that the space agency was dealing them.