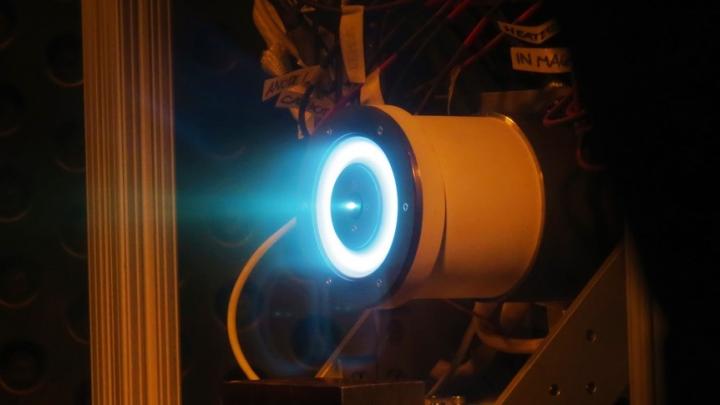 The Silicon Valley-based company said May 7 that it signed a deal that gives it an exclusive worldwide commercial license for JPL’s Magnetically Shielded Miniature, or MaSMi, Hall thruster technology, as well as a contract to provide JPL with three thrusters that use that technology.

Apollo Fusion plans to use the MaSMi technology in an electric thruster called the Apollo Xenon Engine (AXE), which will provide higher performance than the existing electric thrusters that the company has been developing.

Mike Cassidy, chief executive of Apollo Fusion, said in an interview that a key benefit of MaSMi is its use of magnetic shielding to protect components from the plasma generated by the thruster. “It uses magnetic field lines to stop the plasma inside a Hall thruster from eroding the inside of the thruster,” he said.

That erosion limits the lifetime of a conventional Hall thruster to about 200,000 newton-seconds of impulse. Magnetic shielding allows the thruster to last far longer: Cassidy estimated its impulse will be up to 10 times higher.

Apollo Fusion plans to take that technology and commercialize it, including “design to manufacturability” changes that reduces the use of exotic materials and long-lead-time components. That reflects the difference in demand the company anticipates. “Many of the JPL missions might be building one or two probes, whereas for some of our customers it may be hundreds of satellites,” he said.

The company will deliver the three thrusters to JPL to summer, primarily for ground testing, although Cassidy said one of the thrusters could be used on a future spacecraft. He said the company will start commercial production of the AXE thrusters in early 2020.

“There’s strong interest in both the 400-watt and kilowatt-level thrusters,” he said. AXE, he said, will likely be of interest for those developing high-power satellites, including all-electric GEO satellites that want the higher performance to decrease the transit time to their final geostationary orbit. A single AXE thruster, he said, is lighter than two or three smaller ACE thrusters.

Apollo Fusion still sees interest for ACE from companies developing smaller low Earth orbit satellites. That thruster has yet to fly in space, but Cassidy said one will fly in the second half of the year on a cubesat mission designed specifically to test it.

Cassidy added that the JPL deal has an additional benefit for the company. “We’ve really gotten a great response from a lot of our commercial customers,” he said. “They’ve said, ‘Wow, JPL picked you guys to do this. That’s impressive.’”