Radar images reveal clues to the history of a largely unexplored region. 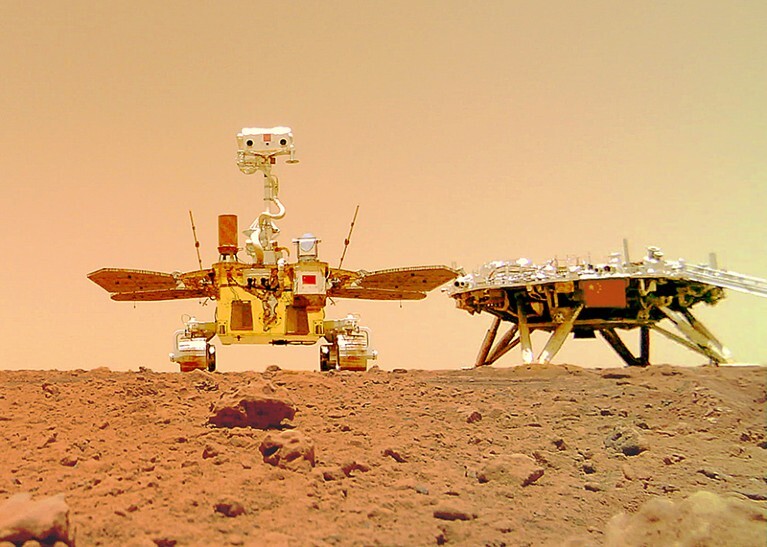 A radar on Zhurong can penetrate the surface to a depth of 100 metres.Credit: Xinhua/Shutterstock

China’s Zhurong rover has peered deep under the surface of Mars, finding evidence of two major floods that probably shaped the region the robot has been exploring since it landed in May 2021.

An analysis published in Nature today1 is the first result from Zhurong’s radar imager, which can probe up to 100 metres below the surface. “It is a very interesting paper, and I was particularly impressed by how deep they can see with this radar,” says Svein-Erik Hamran, a planetary scientist at the University of Oslo, who analysed the only previous data from ground-penetrating radar used on the planet, collected by NASA’s Perseverance rover.

The history of Zhurong’s landing site — on Utopia Planitia, vast plains in Mars’s northern hemisphere — has puzzled scientists. Some have theorized that water or ice was once a feature of the landscape. Observations from space have identified sedimentary deposits that suggest the region was once an ancient ocean or submerged by huge floods, and geological features, such as pitted cones, resemble structures formed by water or ice. In May, researchers analysed infrared images of the landing site taken by China’s Mars orbiter, Tianwen-1, and found hydrated minerals that could have formed when groundwater rose through the rock or ice melted.

But the region could have also been covered in lava, concealing some of these hydrological processes in the subsurface. Eruptions from the volcano Elysium Mons to the east of the landing site, or other volcanic activity, could have covered the region in magma, as has been observed in other parts of the Utopia basin. By studying the radar data, researchers hope to understand what happened, and whether water or ice could still be lurking below the rocks. “We want to know what is going on beneath the surface,” says study co-author Liu Yang, a planetary scientist at the National Space Science Center in Beijing.

Zhurong is China’s first rover on the red planet, and it has been exploring the southern part of Utopia Planitia. The rover’s ground-penetrating radar transmits high-frequency radio waves that can penetrate the surface to a depth of between 3 and 10 metres, and low-frequency waves that can reach up to 100 metres underground but offer poorer resolution. The study authors analysed low-frequency data taken between 25 May and 6 September over more than 1,100 metres of terrain as Zhurong travelled south of its landing site. Radar signals reflect off materials under the surface, revealing the size of their grains and their ability to hold an electric charge. Stronger signals typically indicate larger objects.

The radar did not find any evidence of liquid water down to 80 metres, but it did detect two horizontal layers with interesting patterns. In a layer between 10 and 30 metres deep, the team reports, the reflection signals strengthened with increasing depth. The researchers say this is probably due to larger boulders resting at the base of the layer, and smaller rocks settling on top. An older, thicker layer between 30 and 80 metres down showed a similar pattern.

The older layer is probably the result of rapid flooding that carried sediments to the region more than three billion years ago, when there was a lot of water activity on Mars, says co-author Chen Ling, a seismologist at the Institute of Geology and Geophysics, Chinese Academy of Sciences, in Beijing.

The upper layer could have been created by another flood some 1.6 billion years ago, when there was lots of glacial activity. Chen says it is unlikely that the upper layer contains intact lava flows, because it has a smaller ability to hold an electric charge than would be expected for intact volcanic rocks. Furthermore, the researchers didn’t see any sudden changes in layering, which would be expected when lava flows meet sedimentary material.

But, Chen says, it is possible that a thin coat of lava once covered the upper layer and it has gradually been broken down into smaller pieces. Radar data alone cannot definitively reveal whether material is sedimentary or volcanic, says Xu Yi, a planetary scientist at Macau University of Science and Technology.

Radar data are good at indicating the layering and geometry of subsurface material, but not so good at pinpointing its composition, including whether the material is ice or rock, says Hamran. Often, researchers rely on other clues, such as rocks peering out from the surface, to build a picture of past events, he says. The authors say they can’t rule out the possibility that the region contains buried saline ice.

More radar results are expected from the mission, including data taken during Zhurong’s continued traverse of Mars, results from the high-frequency radar measurements already made, and Tianwen-1’s orbital radar observations, which penetrate deep into the planet. They could help to clarify details of the terrain. “This is only the first step,” say Ling. 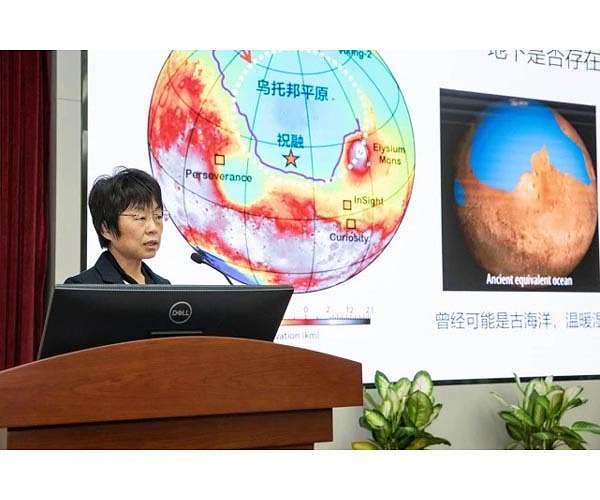 What does the subsurface of Mars' northern lowlands have in common with a French mille crepe cake? They both consist of a number of layers, according to the latest findings by China's Zhurong Mars rover published in the journal Nature on Monday.

The discovery showed that the evolution of the Martian surface environment is more varied and complex than previously anticipated, experts said. Last year, the Zhurong rover landed in Utopia Planitia, a large plain that scientists suspect was once a massive ancient ocean.

Although the rover didn't detect liquid water up to 80 meters underground, the subsurface layer from 30 to 80 meters may be shaped by major flooding that took place around 3.2 to 3.5 billion years ago, said Chen Ling, a researcher at the Institute of Geology and Geophysics of the Chinese Academy of Sciences.

For the layer between 10 and 30 meters underground, the strata were likely sculpted by smaller floods, meteorite impacts or long-term weathering during the Middle to Late Amazonian periods about 1.6 billion years ago, she said.

"What does Mars' underground look like, how did it evolve and whether there are water or ice buried deep under the Martian surface are very important scientific questions that have garnered a lot of attention," she said. "The Zhurong rover may provide valuable insights into these key questions."

Xiao Long, an astrogeology professor at China University of Geosciences, Wuhan, said Zhurong's onsite data can help scientists figure out whether an ancient ocean had existed on Utopia Planitia, and where the water went if there had been an ocean.

In March, scientists reported finding grooves and etchings from particles carried by wind on rocks around Zhurong's landing site, suggesting that physical weathering such as impact sputtering and wind erosion, as well as aqueous interactions involving salt and brine are factors that shaped Mars' current surface.

On July 2020, China's Tianwen 1 Mars spacecraft took off from the Wenchang spaceport and entered Mars orbit in February 2021. The feat made China the first nation to carry out an orbiting, landing and roving mission to Mars on its maiden attempt.