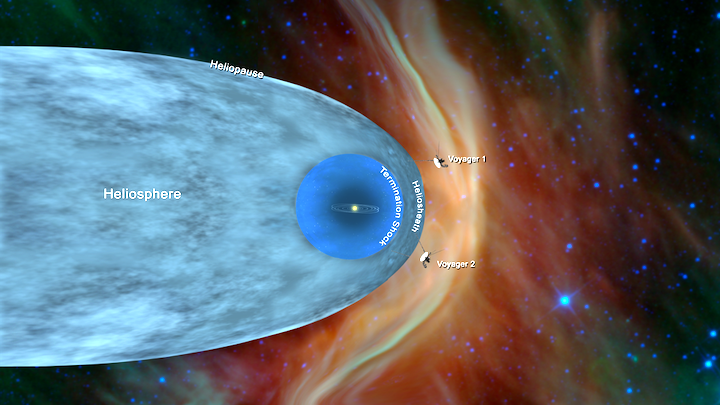 This illustration shows the position of NASA’s Voyager 1 and Voyager 2 probes, outside of the heliosphere, a protective bubble created by the Sun that extends well past the orbit of Pluto.
Credits: NASA/JPL-Caltech

For the second time in history, a human-made object has reached the space between the stars. NASA’s Voyager 2 probe now has exited the heliosphere – the protective bubble of particles and magnetic fields created by the Sun.

Members of NASA’s Voyager team will discuss the findings at a news conference at 11 a.m. EST (8 a.m. PST) today at the meeting of the American Geophysical Union (AGU) in Washington. The news conference will stream live on the agency’s website.

Comparing data from different instruments aboard the trailblazing spacecraft, mission scientists determined the probe crossed the outer edge of the heliosphere on Nov. 5. This boundary, called the heliopause, is where the tenuous, hot solar wind meets the cold, dense interstellar medium. Its twin, Voyager 1, crossed this boundary in 2012, but Voyager 2 carries a working instrument that will provide first-of-its-kind observations of the nature of this gateway into interstellar space.

Voyager 2 now is slightly more than 11 billion miles (18 billion kilometers) from Earth. Mission operators still can communicate with Voyager 2 as it enters this new phase of its journey, but information – moving at the speed of light – takes about 16.5 hours to travel from the spacecraft to Earth. By comparison, light traveling from the Sun takes about eight minutes to reach Earth.

The most compelling evidence of Voyager 2’s exit from the heliosphere came from its onboard Plasma Science Experiment (PLS), an instrument that stopped working on Voyager 1 in 1980, long before that probe crossed the heliopause. Until recently, the space surrounding Voyager 2 was filled predominantly with plasma flowing out from our Sun. This outflow, called the solar wind, creates a bubble – the heliosphere – that envelopes the planets in our solar system. The PLS uses the electrical current of the plasma to detect the speed, density, temperature, pressure and flux of the solar wind. The PLS aboard Voyager 2 observed a steep decline in the speed of the solar wind particles on Nov. 5. Since that date, the plasma instrument has observed no solar wind flow in the environment around Voyager 2, which makes mission scientists confident the probe has left the heliosphere.

In addition to the plasma data, Voyager’s science team members have seen evidence from three other onboard instruments – the cosmic ray subsystem, the low energy charged particle instrument and the magnetometer – that is consistent with the conclusion that Voyager 2 has crossed the heliopause. Voyager’s team members are eager to continue to study the data from these other onboard instruments to get a clearer picture of the environment through which Voyager 2 is traveling. 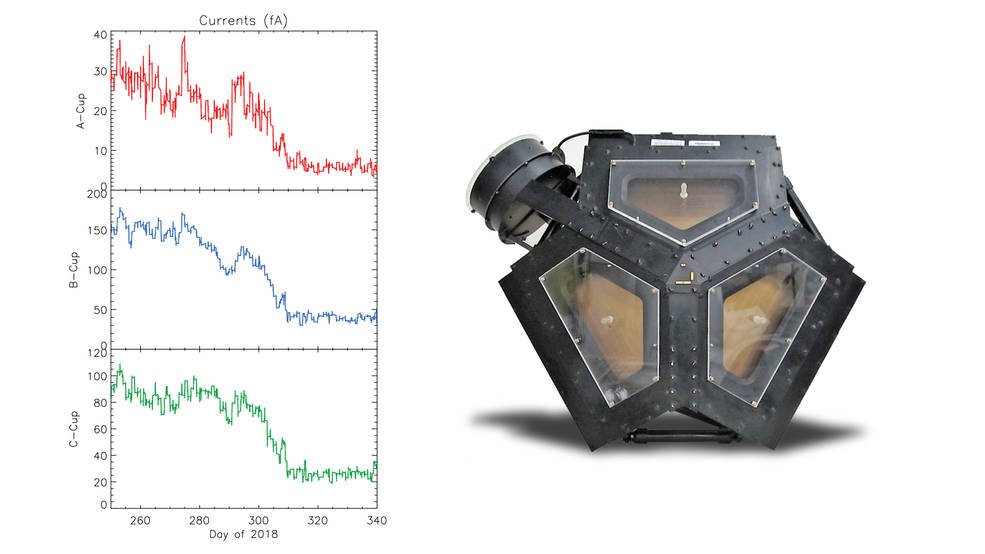 The set of graphs on the left illustrates the drop in electrical current detected in three directions by Voyager 2's plasma science experiment (PLS) to background levels. They are among the key pieces of data that show that Voyager 2 entered interstellar space in November 2018.
Credits: NASA/JPL-Caltech/MIT

“There is still a lot to learn about the region of interstellar space immediately beyond the heliopause,” said Ed Stone, Voyager project scientist based at Caltech in Pasadena, California.

Together, the two Voyagers provide a detailed glimpse of how our heliosphere interacts with the constant interstellar wind flowing from beyond. Their observations complement data from NASA’s Interstellar Boundary Explorer (IBEX), a mission that is remotely sensing that boundary. NASA also is preparing an additional mission – the upcoming Interstellar Mapping and Acceleration Probe (IMAP), due to launch in 2024 – to capitalize on the Voyagers’ observations.

“Voyager has a very special place for us in our heliophysics fleet,” said Nicola Fox, director of the Heliophysics Division at NASA Headquarters. “Our studies start at the Sun and extend out to everything the solar wind touches. To have the Voyagers sending back information about the edge of the Sun’s influence gives us an unprecedented glimpse of truly uncharted territory.”

While the probes have left the heliosphere, Voyager 1 and Voyager 2 have not yet left the solar system, and won’t be leaving anytime soon. The boundary of the solar system is considered to be beyond the outer edge of the Oort Cloud, a collection of small objects that are still under the influence of the Sun’s gravity. The width of the Oort Cloud is not known precisely, but it is estimated to begin at about 1,000 astronomical units (AU) from the Sun and to extend to about 100,000 AU. One AU is the distance from the Sun to Earth. It will take about 300 years for Voyager 2 to reach the inner edge of the Oort Cloud and possibly 30,000 years to fly beyond it.

The Voyager probes are powered using heat from the decay of radioactive material, contained in a device called a radioisotope thermal generator (RTG). The power output of the RTGs diminishes by about four watts per year, which means that various parts of the Voyagers, including the cameras on both spacecraft, have been turned off over time to manage power.

“I think we’re all happy and relieved that the Voyager probes have both operated long enough to make it past this milestone,” said Suzanne Dodd, Voyager project manager at NASA’s Jet Propulsion Laboratory (JPL) in Pasadena, California. “This is what we've all been waiting for. Now we’re looking forward to what we’ll be able to learn from having both probes outside the heliopause.”

Voyager 2 launched in 1977, 16 days before Voyager 1, and both have traveled well beyond their original destinations. The spacecraft were built to last five years and conduct close-up studies of Jupiter and Saturn. However, as the mission continued, additional flybys of the two outermost giant planets, Uranus and Neptune, proved possible. As the spacecraft flew across the solar system, remote-control reprogramming was used to endow the Voyagers with greater capabilities than they possessed when they left Earth. Their two-planet mission became a four-planet mission. Their five-year lifespans have stretched to 41 years, making Voyager 2 NASA’s longest running mission.

The Voyager story has impacted not only generations of current and future scientists and engineers, but also Earth's culture, including film, art and music. Each spacecraft carries a Golden Record of Earth sounds, pictures and messages. Since the spacecraft could last billions of years, these circular time capsules could one day be the only traces of human civilization.

The Voyager Interstellar Mission is a part of NASA’s Heliophysics System Observatory, sponsored by the Heliophysics Division of NASA’s Science Mission Directorate in Washington. JPL built and operates the twin Voyager spacecraft. NASA’s DSN, managed by JPL, is an international network of antennas that supports interplanetary spacecraft missions and radio and radar astronomy observations for the exploration of the solar system and the universe. The network also supports selected Earth-orbiting missions. The Commonwealth Scientific and Industrial Research Organisation, Australia’s national science agency, operates both the Canberra Deep Space Communication Complex, part of the DSN, and the Parkes Observatory, which NASA has been using to downlink data from Voyager 2 since Nov. 8.

Australia’s national science agency, CSIRO, is supporting NASA’s Voyager 2 spacecraft as it enters interstellar space – becoming only the second spacecraft, after its twin Voyager 1, to reach this milestone.

Voyager 2 is approximately 18 billion kilometres from Earth. Voyager mission scientists have been closely monitoring the spacecraft for signs that it has exited the 'heliosphere', a protective bubble created by our Sun as we move through our galaxy.

NASA has today announced that on 5 November 2018, Voyager 2 crossed the outer edge of the heliosphere to reach the space between the stars.

This provides a clearer picture of the environment through which Voyager 2 is travelling. The Parkes telescope will continue to receive downlink data into early 2019.

NASA has engaged the Parkes telescope to support receiving this historic data from Voyager 2 while CDSCC is busy with communications for other deep space missions that are making their own important encounters during this period, such as New Horizons' flyby of the most distant object yet to be explored by a spacecraft, coming up on New Year's Day.

Because of Voyager 2's location and distance from Earth, CDSCC and the Parkes telescope are the only facilities in the world that are capable of having contact with the spacecraft.

Voyager 2 isn't able to record its data on board – it transmits it directly from the instruments back to Earth – making it essential to receive as much of this vital data as possible.

"So we're proud to help NASA solve the scientific challenge of capturing this once in a lifetime opportunity as Voyager 2 ventures into interstellar space," Dr Marshall said.

"Our team at Parkes has partnered with NASA on some of humanity's most momentous steps in space, including the landing of the Mars Rover Curiosity and, almost fifty years ago, the Apollo 11 Moon landing.

"Our long-standing relationship with NASA stretches back more than 50 years, creating breakthrough solutions from science, and fuelled by our shared ambition to push the boundaries of exploration to benefit life back on Earth."

CSIRO Director of Astronomy and Space Science Dr Douglas Bock explained how the additional support from Parkes would track Voyager 2.

"The Canberra Deep Space Communication Complex, which CSIRO operates on behalf of NASA, has been providing command, telemetry and control for the twin Voyager spacecraft since their launch in 1977," Dr Bock said.

"NASA has engaged our 64-metre Parkes radio telescope to 'combine forces' with CDSCC's 70-metre antenna, Deep Space Station 43 (DSS43), to capture as much scientifically valuable data as possible during this critical period.

"The Parkes telescope will be tracking Voyager 2 for 11 hours a day while the spacecraft is observable from Parkes. CDSCC's DSS43 will also track Voyager 2 for a number of hours both before and after Parkes, expanding the available observation time.

"This is a highlight of CSIRO's decades' worth of experience operating large, complex spacecraft tracking and radio astronomy infrastructure."

Voyager 1 crossed into interstellar space in 2012, while Voyager 2 has been on a different trajectory through our solar system.

For NASA's latest mission updates on the progress of Voyager 2 visit voyager.jpl.nasa.gov