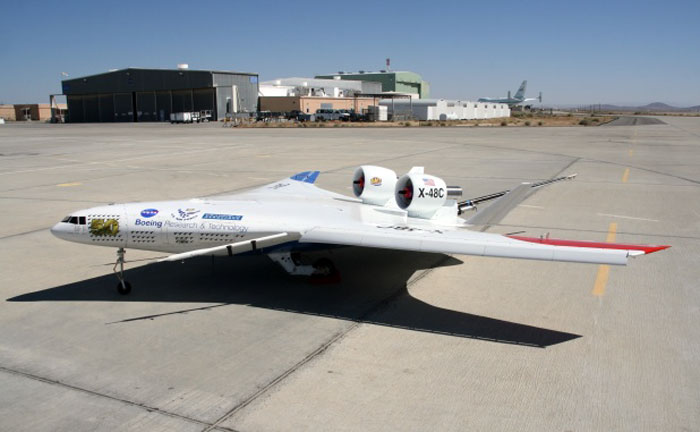 ATLANTA — NASA hopes to make the first flight of the reconfigured X-48C hybrid wing body demonstrator this week, possibly on Aug. 3.
NASA Environmentally Responsible Aviation project manager Fayette Collier says flight testing is imminent. The X-48C is a heavily modified, twin-engine version of the baseline three-engine X-48B, and has been rebuilt to evaluate the handling characteristics of a low-noise design.
The upcoming tests mark the final phase of a long-running flight test effort that began in 2007. In this new configuration the engines are mounted further forward from the trailing edge and shielded between vertical tails, which are moved inboard and replace wingtip-mounted tails. The shape also represents a configuration of the blended wing body (BWB) that is closer to a potential full-size production aircraft. “It’s always a big deal when you get the aircraft back from modification,” Collier says.
The design has shown the potential for up to 50% lower fuel burn and 40dB less noise than a similarly sized tube-and-wing aircraft, and could ultimately form the basis of future military airlift and tanker aircraft as well as commercial freighters. The upcoming test effort is expected to cover up to 25 flights and conclude in December. The focus for the work will be comparison of the flight characteristics of the modified vehicle with earlier generation X-48Bs, which showed good, stable handling even at high angles of attack and high sideslip angles.
Boeing hopes the X-48C could provide the interim step to a larger, piloted BWB demonstrator vehicle.
Foto+Quelle: NASA
« Zum vorherigen Eintrag Zum nächsten Eintrag »
4431 Views
Created with page4