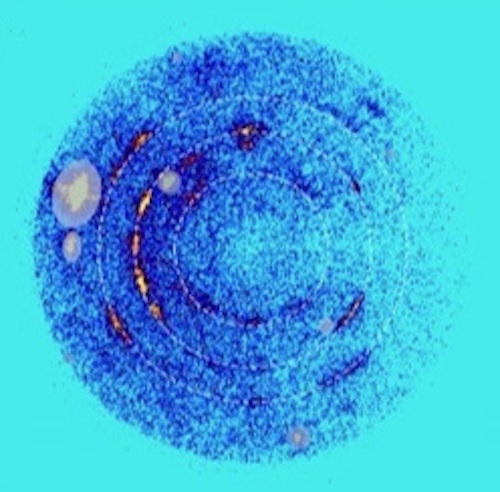 X-ray diffraction images showing the new form of silica created by sending an intense shock wave through a sample of quartz using a specialized gas gun. When the x-rays bounce off repeating planes of a crystalline structure, they scatter. This creates a distinctive ring pattern. Each ring is associated with a different plane and together this data can tell researchers about the material’s atomic-level architecture. Image is courtesy of Sally June Tracy, Stefan Turneaure, and Thomas Duffy.

Washington, DC— When a meteorite hurtles through the atmosphere and crashes to Earth, how does its violent impact alter the minerals found at the landing site? What can the short-lived chemical phases created by these extreme impacts teach scientists about the minerals existing at the high-temperature and pressure conditions found deep inside the planet?

New work led by Carnegie’s Sally June Tracy examined the crystal structure of the silica mineral quartz under shock compression and is challenging longstanding assumptions about how this ubiquitous material behaves under such intense conditions. The results are published in Science Advances.

"Quartz is one of the most abundant minerals in Earth’s crust, found in a multitude of different rock types,” Tracy explained. “In the lab, we can mimic a meteorite impact and see what happens.”

Tracy and her colleagues—Washington State University’s (WSU) Stefan Turneaure and Princeton University’s Thomas Duffy, a former Carnegie Fellow—used specialized impact facilities to accelerate projectiles into quartz samples at extremely high speeds—several times faster than a bullet fired from a rifle. Special x-ray instruments were used to discern the crystal structure of the material that forms less than one-millionth of a second after impact. Experiments were carried out at the Dynamic Compression Sector (DCS), which is operated by WSU and located at the Advanced Photon Source, Argonne National Laboratory.

Quartz is made up of one silicon atom and two oxygen atoms arranged in a tetrahedral lattice structure. Because these elements are also common in the silicate-rich mantle of the Earth, discovering the changes quartz undergoes at high-pressure and -temperature conditions, like those found in the Earth’s interior, could also reveal details about the planet’s geologic history.

When a material is subjected to extreme pressures and temperatures, its internal atomic structure can be re-shaped, causing its properties to shift. For example, both graphite and diamond are made from carbon. But graphite, which forms at low pressure, is soft and opaque, and diamond, which forms at high pressure, is super-hard and transparent. The different arrangements of carbon atoms determine their structures and their properties, and that in turn affects how we engage with and use them.

Despite decades of research, there has been a long-standing debate in the scientific community about what form silica would take during an impact event, or under dynamic compression conditions such as those deployed by Tracy and her collaborators. Under shock loading, silica is often assumed to transform to a dense crystalline form known as stishovite—a structure believed to exist in the deep Earth.  Others have argued that because of the fast timescale of the shock the material will instead adopt a dense, glassy structure.

Tracy and her team were able to demonstrate that counter to expectations, when subjected to a dynamic shock of greater than 300,000 times normal atmospheric pressure, quartz undergoes a transition to a novel disordered crystalline phase, whose structure is intermediate between fully crystalline stishovite and a fully disordered glass.  However, the new structure cannot last once the burst of intense pressure has subsided.

“Dynamic compression experiments allowed us to put this longstanding debate to bed,” Tracy concluded. “What’s more, impact events are an important part of understanding planetary formation and evolution and continued investigations can reveal new information about these processes.”

A photograph of a meteorite strike site in Coconino County, Arizona. New work from Carnegie’s Sally June Tracy and collaborators Stefan Turneaure of Washington State University and Thomas Duffy of Princeton University reveals an unexpected new form of silica created in the type of extreme conditions caused by an impact

This research was supported by the Defense Threat Reduction Agency and the NSF. Washington State University (WSU) provided experimental support through awards from the U.S. Department of Energy (DOE)/National Nuclear Security Agency (NNSA).

This work is based on experiments performed at the Dynamic Compression Sector, operated by WSU under a DOE/ NNSA award. This research used the resources of the Advanced Photon Source, a Department of Energy Office of Science User Facility operated for the DOE Office of Science by the Argonne National .