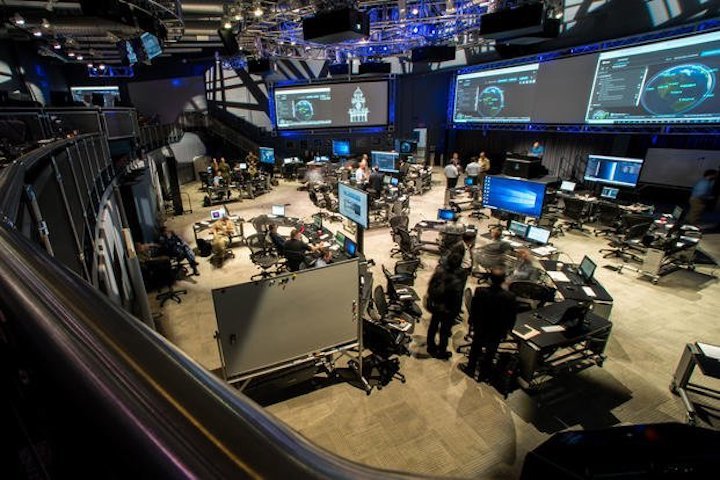 PETERSON AIR FORCE BASE, Colo. -- The U.S. military relies so heavily on space-based technologies to keep its edge on the battlefield that adversaries see the dependence as a big weakness -- and they're already testing ways to attack it.

Russia recently blasted a torpedo-like anti-satellite missile system through space, a clear signal that it's testing offensive ways to destroy satellites orbiting the Earth. That type of strike that could prove devastating to troops.

"If we don't supply satellite communications that enable a drone to see a potential threat that's coming toward land or maritime forces -- if we don't deliver that capability and they aren't warned -- lives are lost," said Air Force Maj. Gen. John Shaw, commander of the Combined Force Space Component.

Shaw and other U.S. Space Command leaders told reporters here Thursday that the U.S. doesn't want warfare to extend into space, but big moves by other countries have made preparing for it a necessity.

China, Russia and Iran, for example, have watched how U.S. forces use space-based technologies on the battlefield. They've now built up their own intelligence, surveillance and reconnaissance assets -- not only to help command and control their own forces, but also to track and target American troops.

"Our adversaries have reorganized for space. They are demonstrating their commitment to space operations [because] they recognize how the U.S. benefits from the use of space," one Space Command official said. "It can be a little bit concerning that near-peer adversaries have that capability."

The Defense Department has, in response, made space a huge priority in recent years. It resurrected the once-defunct Space Command, designating the cosmos a combatant command just like U.S. Indo-Pacific or Central commands. And the new Space Force military branch will train and equip warfighters to operate in that realm.

As one Space Command official here put it, "We are probably better resourced and have more visibility than we've ever had."

Assigning SPACECOM and Space Force each their own leader was a milestone moment for military space operations, which will continue to build in the coming years. The military's top civilian and uniformed leaders were here to participate in the change-of-command ceremony.

"For decades, the world has enjoyed the freedom to operate in space," Defense Secretary Mark Esper said Thursday. "... Yet we now find that space has become highly contested, and the gains we possess are threatened."

That matches what Shaw and Air Force Brig. Gen. Shawn Bratton, SPACECOM's deputy director of operations, have seen throughout their careers.

"It's just the nature of competition," Bratton said. "Where's my adversary weak? Where can I compete strongly? We react to them, and they react to us. ... That's the ongoing struggle in the competition phase that we're seeing."

Shaw, who in his current role helps deliver space-based capabilities, such as satellite communications and imaging, to troops on the ground, said space was once a "placid domain." Now, he said, those capabilities are at risk of attack.

He noted the role space operators played earlier this year when Iran struck a military base in Iraq following a U.S. airstrike that took out Maj. Gen. Qasem Soleimani, head of Iran’s elite Quds force. Space operators were able to spot the threat and quickly alert those in its path.

"My greatest fears were not realized that day because we did respond very quickly ... in terms of warning to troops that were threatened on the ground," Shaw said. "And I believed [that] saved many lives."

Those are the types of space capabilities leaders here say need vital protection. And the new Space Force branch will help ensure the military has properly trained forces who can do that.

"We need to develop that force structure, that expertise," Shaw said.

Aside from bringing back U.S. Space Command and standing up the Space Force, the U.S. is also in the process of updating its National Space Policy. That could lay out how American warfighters fit into the government's overall space strategy.

Bratton said having military space operators involved in those talks could help establish rules and norms beyond Earth, like those that exist in international waters or airspace. Space Command could help shape those future rules, he said, while Space Force develops the troops with the training and experience to operate there.

"[Creating Space Force] was absolutely the right thing to do at the right time," Bratton said.

U.S. officials have only recently begun publicizing some of the threats taking place in space.

While leading Space Command, Raymond has at least twice this year blasted Russia over what he called threatening and hostile behavior in space.

After Russia tested what Shaw described as its space torpedo, Raymond said the U.S. stands ready to defend itself and its allies from aggressive actions there. The 2017 National Security Strategy states that any harmful interference or attack on critical space architecture that directly affects a vital U.S. interest "will be met with a deliberate response at a time, place, manner and domain of our choosing."

The U.S. way of life is dependent on its space capabilities, Dickinson told reporters after the change of command ceremony.

"Our economy, our way of life depends on space capabilities," he said. "We have adversaries and competitors now in the space domain that have demonstrated that they want to hold our assets at risk. We need to be able to defend those."

With Space Command -- and now Space Force -- focused on threats beyond Earth, Dickinson said they'll continue tracking and speaking out against bad actors the U.S. faces there.

"Our job ... is to make sure that we watch, and we hold people accountable for what they're doing in the space domain," he said.

That might be easier with some countries than others. Officials said Russia is more likely to publicly show off its capabilities in efforts to deter other nations. China, however, is much more ambiguous, they said. Second only to the U.S. in the number of satellites it launches into space, China rarely offers explanations as to what the tools are doing there.

As warfare grows more technical and networks more linked, protecting space capabilities gets only more important. While costly and time-consuming, Shaw likened the investments he says the military must make in space to those the Defense Department made to build up air warfare capabilities.

"Airpower was rife with a lot of challenges as well," he said. "They could be shot down; they were costly. And someone could ask the question, 'Why do we need these airplanes?' ... I think anyone who would've followed that path would have been in big trouble in the future."