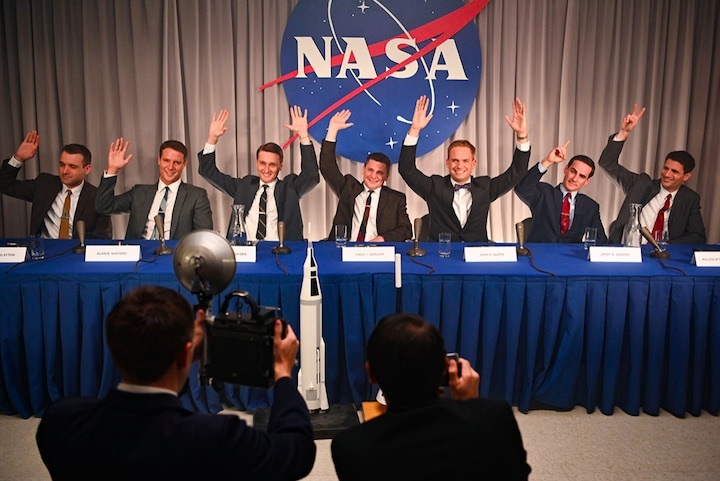 National Geographic's new scripted series about America's first astronauts is set to blast off on Oct. 9 on the Disney+ streaming service. Based on journalist Tom Wolfe's 1979 bestselling book by the same title, "The Right Stuff" dramatizes the history behind NASA's original Mercury 7 astronauts as the United States' raced the Soviet Union to put the first human into space.

"The incredible story of America's first astronauts begins right here on Earth in the Disney+ original series 'The Right Stuff,' with a two-episode premiere on Friday, October 9," Disney and National Geographic announced on Thursday (Aug. 20).

Produced by Leonardo DiCaprio's Appian Way and Warner Bros. Television, "The Right Stuff" takes "a clear-eyed look at America's first 'reality show,' when ambitious astronauts and their families became instant celebrities in a competition of money, fame and immortality."

Disney kicked off the countdown to the series' premiere on Thursday with a new two-minute trailer providing an extended look at some of the drama and action that will comprise the eight-episode first season of "The Right Stuff."

Wainwright explains to the seven chosen test pilots how their new celebrity status will change how they are viewed by the public.

"People will feel like they know you. They'll want to be you," he says. "Astronauts — 'astro' meaning star, 'naught' — voyager.' Nobody has ever seen anything like you men until now."

As the trailer continues, quick scenes show the astronauts examining a Mercury spacecraft, spinning on board the multi-axis trainer that was used to prepare themfor spaceflight and what appears to be the ill-fated launch of the first Mercury-Atlas rocket in July 1960.

Also teased is a developing rivalry between Alan Shepard (Jake McDorman) and John Glenn (Patrick J. Adams), who are central story and, as history records, went on to become the first Americans to enter space and orbit Earth, respectively.

"I don't know what you want John," said Shepard (McDorman), "but it is almost like you are afraid of the competition."

Bob Gilruth (Patrick Fischler), who headed NASA's Space Task Group, and Chris Kraft (Eric Ladin), who oversaw the creation of Mission Control, are also portrayed in the series, as are other members of the engineering and ground control teams who made the astronauts' flights the success that they were.

"Set during a time when many wondered whether America's glory days were behind it, 'The Right Stuff' is an aspirational story about ambition and exploration and how ordinary human beings can achieve the extraordinary," said Disney.