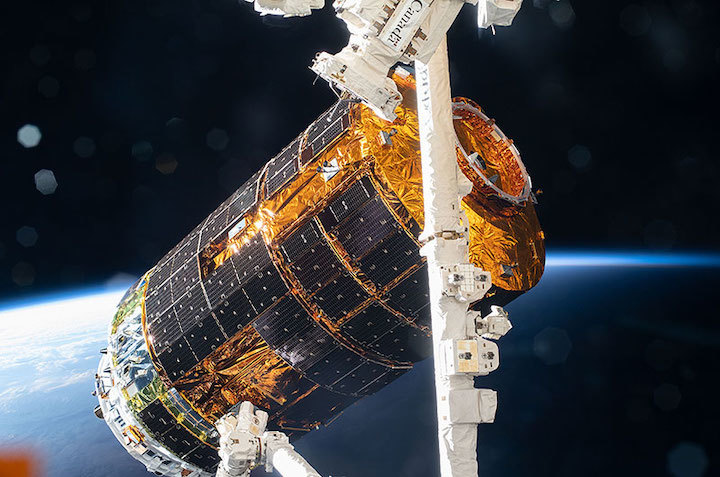 Japan's "white stork" has taken flight from the International Space Station for the last time.

The Japan Aerospace Exploration Agency's (JAXA) ninth H-II Transfer Vehicle, or HTV-9, was released from its temporary perch at the end of the space station's robotic arm on Tuesday (Aug. 18) at 1:36 p.m. EDT (1736 GMT). The uncrewed cargo vehicle, which JAXA nicknamed the "Kounotori," or "white stork," will spend two more days in orbit before flight controllers in Tsukuba, Japan command an engine burn that it will send the spacecraft plunging back into Earth's atmosphere.

Loaded with about 7,400 pounds (3,400 kilograms) of used equipment and trash from the space station, the HTV will meet its fiery end, succumbing to the heat of re-entry and burning up over the Pacific Ocean.

The de-orbit will mark the end of 11 years of HTV missions.

"Over the past 11 years, the H-II Transfer Vehicle Kounotori has delivered over 40 tons of cargo, research, hardware and equipment to the International Space Station," Joel Montalbano, NASA's ISS program manager, said in a statement during NASA TV's broadcast of the departure. "I want to congratulate Japan on the HTV missions."

First launched on Sept. 10, 2009, atop Mitsubishi Heavy Industries' first H-IIB rocket from the Tanegashima Space Center in southern Japan, the barrel-shaped HTV was Japan's first spacecraft to service a space station and the first uncrewed vehicle to be berthed on the U.S. segment of the International Space Station (ISS). The 33-foot (10-meter) long and 14-foot (4.4-meter) wide, solar-powered spacecraft was also the first capsule to carry both pressurized and unpressurized cargo.

"A white stork carries an image of conveying an important thing (a baby, happiness, and other joyful things); therefore, it precisely expresses the HTV's mission to transport essential materials to the ISS," JAXA officials wrote of the spacecraft's nickname in November 2010.

Like the eight vehicles that preceded it, HTV-9 spent its 85 days berthed to the station being unloaded of its cargo and then repacked with waste. After the space shuttles retired in 2011, Japan's HTV was the only spacecraft capable of delivering and removing the station's refrigerator-size payload racks. HTV-9 carried NASA's final "EXpedite the PRocessing of Experiments to the Space Station," or EXPRESS rack, which provide power, storage, temperature control, data and transport for up to 10 research experiments.

HTV-9 also delivered the final set of six new lithium-ion batteries that were used to complete the upgrade of the space station's solar power system this summer. Older, less capable nickel-hydrogen batteries, mounted on a pallet that was launched on HTV-8, are now being discarded in the unpressurized compartment aboard HTV-9. (The exposed pallet that was launched on HTV-9 will be jettisoned from the station later.)

On Tuesday, NASA flight controllers in Houston remotely commanded the Canadarm2 robotic arm to detach HTV-9 from the Harmony node and position it for release. Then NASA astronaut and Expedition 63 commander Chris Cassidy, assisted by Russian flight engineer Ivan Wagner, oversaw the vehicle's departure as it was freed from the robotic arm's grasp and fired its on board thrusters to separate from the orbiting laboratory.

"It has been a real honor for the members of Expedition 63 ... to welcome HTV, conduct operations in it and now to be part of its departure on the ninth spaceship of the class. Much congratulations to our colleagues and friends at JAXA," Cassidy said after the HTV reached a safe distance from the space station.

As it moved away, HTV-9 enabled one more experiment, completing the already successful Wireless LAN Demonstration (WLD). In a first, the HTV transmitted live images to the space station in real time. The technology may someday support autonomous dockings on future missions, including between vehicles operating around the moon and Mars.

The HTV is the third type of visiting vehicle to retire after flying in support of the ISS program. After NASA's space shuttle landed from its last mission in 2011, the European Space Agency's (ESA) Automated Transfer Vehicle (ATV) flew its fifth and final mission in 2015. The space station continues to be supplied by Russia's Soyuz and Progress spacecraft, Northrop Grumman's Cygnus freighter and SpaceX's Dragon capsule. Boeing's Starliner and Sierra Nevada's Dream Chaser are expected to enter service in 2021.

JAXA is planning to succeed the HTV "Kounotori" with a new, more advanced spacecraft, dubbed the HTV-X. The new ship will have greater payload capacity, be able to support cargo that requires power and be equipped with a hatch to allow for late additions just prior to its launch.

Targeted to first fly to the station in 2022, the HTV-X is also being considered for flights to the moon, to deliver supplies to the planned lunar orbit Gateway as part of JAXA's proposed contributions to NASA's Artemis program.

"HTV is the last Japanese cargo vehicle of the series, yet this final departure is the start of a new chapter for our international partner, who is developing [the] next generation cargo vehicle, HTV-X," JAXA astronaut Norishige Kanai said from the HTV control room in Tsukuba, Japan. "We have upgraded the capability of the new vehicle [to] expand our activity in space, not only on the ISS, but beyond low Earth orbit. We look forward to seeing HTV-X in the near future. Till then, farewell HTV." 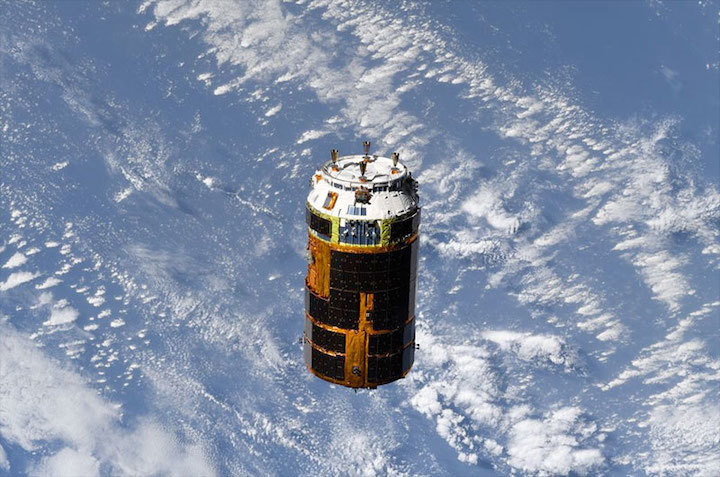