The mission would likely hunt for signs of life in Venus' clouds. 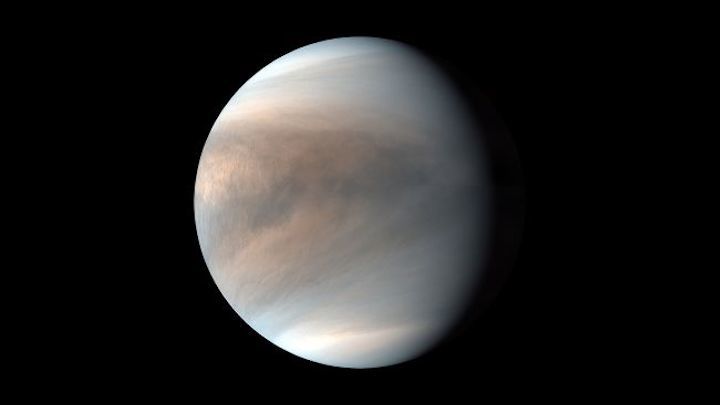 There may be life in Venus' clouds, and Rocket Lab wants to help find it.

The California-based spaceflight company, which gives small spacecraftdedicated rides to Earth orbit, aims to go interplanetary soon, with a robotic astrobiology mission to the second rock from the sun.

"I'm madly in love with Venus," Rocket Lab founder and CEO Peter Beck said on Aug. 5 during a company update and Q&A session livestreamed on YouTube. "I'm working very hard to put together a private mission to go to Venus in 2023."

Life in the Venusian skies?

Beck's love springs in part from the lessons we can learn from Venus, which he described as "Earth in a climate-change disaster." But a bigger motivator is Venus' astrobiological potential.

Venus was a temperate world in the ancient past, with rivers, lakes and oceans that may have lasted for billions of years at a time. Then came the climate-change disaster: A runaway greenhouse effect transformed Venus' surface into a bone-dry hellscape with crushing atmospheric pressures and temperatures hot enough to melt lead.

But life on Venus, if it ever existed, may have found refuge in the sky. Many scientists believe that potentially habitable pockets persisted in Venus' atmosphere for long stretches, likely into the present day. About 30 miles (50 kilometers) up, for example, temperatures and pressures today are similar to those on Earth's surface.

It is this aerial environment that Rocket Lab plans to target with the 2023 mission.

"We're going to learn a lot on the way there, and we're going to have a crack at seeing if we can discover what's in that atmospheric zone," Beck said. "And who knows? You may hit the jackpot."

The 2023 mission will employ Rocket Lab's two-stage Electron booster and Photon satellite bus. The 57-foot-tall (17 meters) Electron is a viable option for interplanetary missions now, thanks to recent advances in battery technologythat boost the performance of the rocket's Rutherford engines.

With that improvement, Electron is now capable of lofting up to 660 lbs. (300 kilograms) of payload to low-Earth orbit instead of 500 lbs. (225 kg), Rocket Lab representatives have said.

Photon, which has yet to make its spaceflight debut, won't descend into Venus' sulfurous skies on the coming mission. The current plan calls for the spacecraft to deploy one or more smaller probes into the planet's atmosphere, Beck wrote in a Twitter post on Aug. 4.

There's no guarantee that life exists in the Venusian clouds, of course, or that Rocket Lab's planned foray will find it if it's there. But the mission could be an exploration game-changer no matter what the scientific return ends up being, Beck said.

"At the very least, I think it's a needle-mover even for just a private mission to try and go do something interplanetary," he said. "That sends a message to the rest of the world that, 'Hey, look — we can do these things privately.'"

The Venus mission won't be Rocket Lab's first foray beyond Earth orbit, if all goes according to plan. The company recently scored a contract to fly a NASA satellite to the moon in early 2021 using Electron and Photon.

Beck hopes the duo can do a fair bit of needle-moving in the coming years, providing dedicated, low-cost rides to a variety of distant destinations.

"Generally, if you want to do a science mission to the moon, you start writing a check at $50-$100 million," he said. But with Photon coming online, "for $10-20 million, you can actually do some really good science, interplanetary and lunar. That's what excites me."