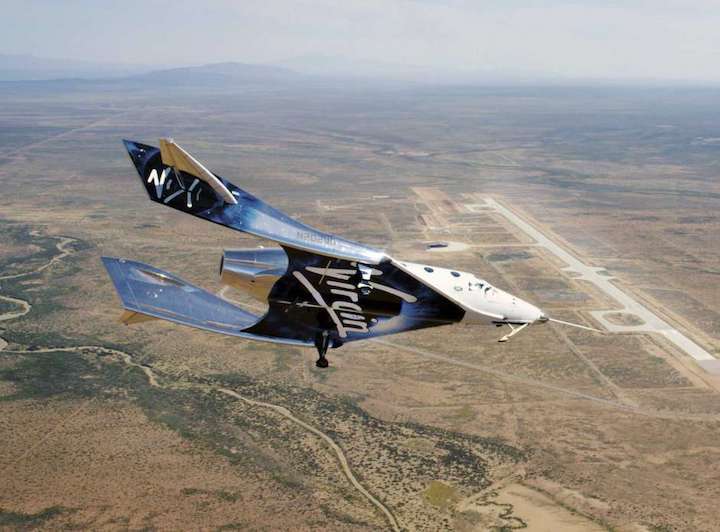 FILE - In this Friday, May 1, 2020 photo provided by Virgin Galactic, the SpaceshipTwo Unity flies free in New Mexico airspace for the first time. Founder Richard Branson is the only one of the three billionaires planning to launch himself _ from New Mexico, hopefully, by year’s end _ before putting customers aboard. (Virgin Galactic via AP)
Photo: Virgin Galactic, HONS / Associated Press

NASA’s Johnson Space Center is partnering with Richard Branson’s Virgin Galactic to explore a program that would help get private astronauts into space.

Mojave, Calif.-based Virgin Galactic announced Monday that its program would find customers and arrange their transportation to the International Space Station. It would also provide program management and astronaut training packages through the Space Act Agreement signed with NASA.

“Based on the unsurpassed levels of spaceflight customer commitments we have secured to date, we are proud to share that insight in helping to grow another market for the new space economy,” George Whitesides, CEO of Virgin Galactic, said in a news release. “We want to bring the planetary perspective to many thousands of people.”

Virgin Galactic is not developing the systems that will take private astronauts into orbit, but it is developing a suborbital spaceflight experience. This vehicle has not yet flown customers, but in May the company said it had 600 people with flights already reserved and 400 others who paid a $1,000 refundable deposit to be placed in line to reserve seats when they become available. Tickets for the first 600 customers cost $250,000 each. The second group of customers will likely pay more.

Virgin Galactic will launch paying customers from Spaceport America located in Truth or Consequences, N.M. Its spaceflight system has two parts. WhiteKnightTwo is a custom-built, dual-fuselage jet aircraft. Attached to its belly is the SpaceShipTwo, where passengers will sit. WhiteKnightTwo will carry the spaceship to about 50,000 feet before releasing it. SpaceShipTwo’s rocket motor will then ignite and take travelers into weightlessness. Customers will see the curvature of the Earth and experience several minutes of weightlessness before returning to Earth.

NASA announced last year that it would open the International Space Station for private astronaut missions as part of its plan to help develop a commercial economy in space. Private astronauts, or space tourists, have previously flown to the space station. American Dennis Tito was the first in 2001, and Canadian Guy Laliberté was the last in 2009. Both flew to the International Space Station on a Russian Soyuz spacecraft.