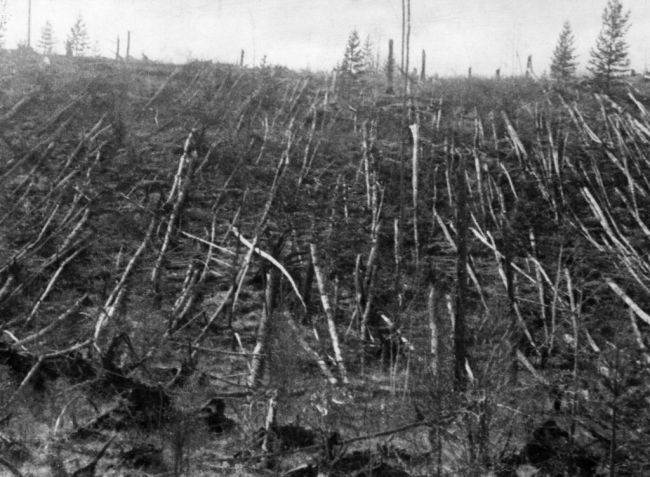 A mysterious blast in 1908, thought to have been caused by a meteor, flattened a Siberian taiga forest. This photo was taken in 1938, during an expedition by Russian mineralogist Leonid Kulik, investigating the event.
(Image: © Sovfoto/Universal Images Group via Getty Images)

A new explanation for a massive blast over a remote Siberian forest in 1908 is even stranger than the mysterious incident itself.

Known as the Tunguska event, the blast flattened more than 80 million trees in seconds, over an area spanning nearly 800 square miles (2,000 square kilometers) — but left no crater. A meteor that exploded before hitting the ground was thought by many to be the culprit. However, a comet or asteroidwould likely have left behind rocky fragments after blowing up, and no "smoking gun" remnants of a cosmic visitor have ever been found.

Now, a team of researchers has proposed a solution to this long-standing puzzle: A large iron meteor hurtled toward Earth and came just close enough to generate a tremendous shock wave. But the meteor then curved away from our planet without breaking up, its mass and momentum carrying it onward in its journey through space.

On the morning of June 30, 1908, the sky above Siberia flared so bright and hot that a witness standing dozens of kilometers from the site thought that his shirt had caught fire, said Vladimir Pariev, co-author of the new Tunguska study and a researcher with the P. N. Lebedev Physical Institute of the Russian Academy of Sciences in Moscow.

Following the bright light, which lasted for about 1 minute, was an explosion that smashed windows and knocked people off their feet in a town more than 35 miles (60 km) away, the BBC reported. "The sky was split in two, and high above the forest the whole northern part of the sky appeared covered with fire," another witness said in a testimonial. Energy released by the blast was later estimated by scientists to be 185 times greater than that of the atomic bomb dropped on Hiroshima in 1945, according to NASA.

Initial explanations for the blast included volcanic eruptions and mining accidents, according to NASA, but those claims were not supported by physical evidence. Other later suggestions were more far-fetched, such as a crashed UFOor a black hole collision with Earth — a study describing the black hole hypothesis was published in the journal Nature in 1973 (and was soundly debunked in another Nature study published just a few months later).

The most widely accepted scientific explanation is that a rocky asteroid or comet entered Earth's atmosphere and then disintegrated with a bang about 3 to 6 miles (5 to 10 km) above the ground, Pariev told Live Science in an email. But such an explosion should have strewn the ground with rocky debris, which no one has ever found. By comparison, a meteor that exploded over Chelyabinsk, Russia, in February 2013 broke into fragments that were discovered within a week, Pariev said.

What if, the researchers questioned, the Tunguska meteor were made of iron rather than rock? Could a massive iron meteor "graze" Earth's atmosphere, approaching close enough to generate a powerful shock wave, then yank free of the planet's gravitational pull and escape without fragmenting?

To test that hypothesis, the scientists calculated meteor paths using computer models. They looked at objects that were as small as 164 feet (50 meters) across and as large as 656 feet (200 m) in diameter. Objects were made of rock, ice or iron, and approached in a trajectory that brought them within 6 to 10 miles (10 to 15 km) of Earth's surface.

The scientists' calculations showed that space bodies made of rock and ice would completely disintegrate under the enormous pressures generated by their passage through the tropospheric altitudes. "Only asteroids made of iron larger than 100 m [328 feet] in diameter can survive and not get cracked and fragmented into many separate pieces," they said.

The researchers estimated that the Tunguska meteor likely measured between 328 and 656 feet (100 and 200 m) in diameter, and hurtled through Earth's atmosphere at roughly 45,000 mph (72,000 km/h). During its fiery passage, the meteor would lose some of its mass. But iron shed by a meteor traveling at such speeds would have escaped as gas and plasma, oxidized in the atmosphere and then dispersed on the ground, becoming nearly indistinguishable from terrestrial iron oxides, according to the study.

Prior studies have calculated the power of shock waves produced by meteors based on the object entering Earth's atmosphere at a very steep angle "and either hitting the ground or exploding in midair," Pariev said.

In the case of the Tunguska meteor, the iron-rich space object could have entered Earth's atmosphere at a very shallow angle — about 9 to 12 degrees tangential to the surface. It then would have grazed through the atmosphere, creating a shock wave at an altitude of around 6 to 10 miles (10 to 15 km) above the ground, capable of flattening trees for hundreds of kilometers and scorching the surface. But because of the meteor's mass and momentum, it didn't break up; it then exited the atmosphere and returned to space, the researchers reported.

However, some lingering questions about this scenario remain, said Mark Boslough, a research professor at the University of New Mexico and physicist with Los Alamos National Laboratory.

Boslough, who was not involved in the study, told Live Science in an email that if an object "skimmed through the atmosphere" and didn't blow up, the resulting shock wave would be significantly weaker than an explosion's blast wave.

"An object that survived such a transit through the atmosphere could not have descended close enough to the surface for a sonic boom to do the kind of damage that was observed at Tunguska," Boslough said.

What's more, the pattern of felled trees at the site is radial — emanating from a single point of tremendous energy release, he said. That's something you'd expect to see after an explosion rather than a sonic boom, "even if it had been strong enough to blow trees over." Boslough added that eyewitness accounts at the time of the incident "are consistent with an object that was descending toward the surface before it exploded."

While the study authors didn't numerically calculate the impact of a shock wave that a "grazing" iron meteor of this size could produce, their estimates still suggest that such a wave would be powerful enough to flatten trees and damage the ground as the Tunguska event did, Pariev said in the email.

"Detailed calculations of the shock waves from a grazing asteroid is the subject of our ongoing research," he added.

The findings were published online in the March issue of the journal Monthly Notices of the Royal Astronomical Society.