"Russia has become one of the world’s greatest perpetrators of electronic counterspace warfare, jamming and spoofing PNT and communications satellite signals in conflict zones, nearby territories, and within its own borders," CSIS says. 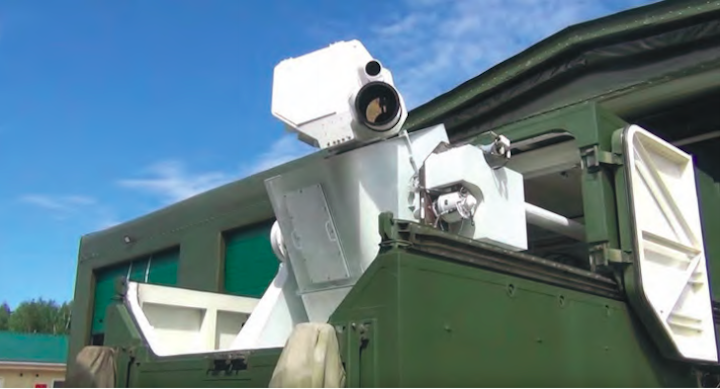 WASHINGTON: While China seems to have taken a breather over the past year in testing of a maneuverable satellite that has demonstrated potential anti-satellite (ASAT) capabilities, Russia seems to have stepped up its self-declared efforts aimed at attacking US satellites, say a pair of new studies.

At the same time, the US used its mysterious X-37B spaceplane to covertly launch several cubesats that could be demonstrating ASAT capabilities, and practiced extensive GPS jamming during several naval exercises. And India joined the ASAT club as the fourth country to test a kinetic-kill ASAT, while France and Japan intensified exploration of new ASAT capabilities, according to the studies released today by the Center for Strategic and International Studies (CSIS) and Secure World Foundation (SWF) — what would have been the kickoff day for the annual Space Symposium, which was cancelled due to the COVID-19 pandemic.

The two studies represent the  third iteration in a series of linked annual reports by the two think tanks. All in all, they find, 2019 saw an increase in the ability of the big three space antagonists to threaten each other’s satellites, as well as an expansion in the number of countries pursuing ground- and space-based capabilities to damage or destroy satellite systems.

As Breaking D readers are well aware, US military leaders and top civilians have for more than a year been increasingly vocal on what they say are growing threats to US satellites from Russian and Chinese ASATs — most recently, both Air Force Secretary Barbara Barrett and Space Force chief Gen. Jay Raymond in testimony to the House Armed Services Committee. This is why the Space Force is making “a strong pivot to space superiority,” Raymond said.

Russia and China, for their part, blame the US for moving first to weaponize space and claim their programs are aimed at deterring US attacks.

Both reports are based on open sources, but they are different in approach. The SWF study, “Global Counterspace Capabilities,” is muchmore technical and detailed, and includes counterspace related activities by the US and its allies. The CSIS reports, “Space Threat Assessment 2020,” on the other hand, are looking at the counterspace capabilities of potential US adversaries and focuses on characterizing threat levels. Key findings are summarized below:

Most intriguing is the CSIS finding that China seems to have “paused, or at least slowed, development and testing of its kinetic physical counterspace capabilities.” The report speculates that perhaps this is because “its kinetic ASAT capabilities are well developed or because kinetic physical counterspace weapons are overt weapons that would likely draw a strong international condemnation if ever used.” 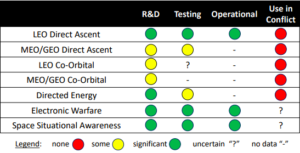 In particular, CSIS finds, Chinese testing of its self-declared “inspector” satellite SJ-17 was on hiatus in 2019, sitting still rather than moving to shadow other Chinese satellites as it had been the previous year. SJ-17 is in a specialized orbit at some 36,000 km where satellites appear to be stationary over a certain spot on the Earth where most military and commercial communications satellites are located. That said, CSIS says SJ-17 may be getting ready to resume operations.

Both studies agree, however, that China has not used a satellite to destroy or harm another satellite. Further, the studies concur, China’s tests of SJ-17 and similar satellites undertaking rendezvous and proximity (RPO) activities in lower orbits primarily have been focused on Beijing’s own satellites — indicating that they may be aimed primarily at one or more benign missions such as intelligence gathering, inspection and repair, or debris removal.

On the other hand, CSIS says bluntly that China already “has started training” specialize units of the Strategic Space Force (SSF) using direct-ascent kinetic ASATs capable of destroying satellites in Low Earth Orbit (LEO, up to 2,000 kilometers in altitude where most observation satellites orbit.)

SWF is more cautious, finding that China’s ability to destroy LEO satellites “is likely mature and likely operationally fielded on mobile launchers.” More specifically, SWF finds that this system is most likely the SC-19 that was used to destroy a defunct Chinese weather satellite in 2007. The SC-19, says SWF, appears to be based on the DF-21 ballistic missile that has a range between 2150 and 2500 km.

While there is evidence that China has undertaken experiments of missile-based capabilities that could be ASAT-related in higher orbits, say both studies, SWF assesses that China’s capability to hit targets above LEO, such as Global Positioning System (GPS) satellites in Medium Earth Orbit (MEO), is “likely still experimental” and that there is too little evidence to know if China intends to pursue an operational system.

The two studies are in strong agreement that China expended enormous effort to build non-lethal jamming, spoofing and directed-energy capabilities to interfere with satellite operations.

CSIS says “China is greatly increasing its development, testing, and fielding of non-kinetic physical and electronic counterspace weapons” and that operational deployment of dazzling or blinding lasers “seems imminent.” It also finds that “China is growing bolder with its electronic jamming and spoofing capabilities,” for example GPS spoofing of ship identification and locations in the port of Shanghai.

“Russia has become one of the world’s greatest perpetrators of electronic counterspace warfare, jamming and spoofing PNT and communications satellite signals in conflict zones, nearby territories, and within its own borders,” CSIS says. “Despite overwhelming evidence that Russia has employed the use of mobile, ground-based electronic counterspace weapons on a regular basis both within its borders and abroad, the Russian state has repeatedly denied any wrongdoing.”

Specifically, CSIS mentions jamming in Syria, the Arctic Circle, Crimea and even in Moscow and St. Petersburg. While stressing that most “critical details” about Russia’s self-declared laser for targeting LEO satellites remain unknown, the CSIS study cites a February 2019 statement by President Vladimir Putin that the “Peresvet” system would be place on “standby alert” in December 2019.

SWF says that “new research suggesting that there are two separate programs, Burevestnik and Nivelir, which may correspond to a co-orbital ASAT program and a surveillance/tracking program, respectively; additional RPO activities in LEO and GEO, including shadowing of a NRO imagery satellite; evidence of a new program called Ekipazh to develop nuclear-powered space-based electronic warfare capability; and widespread PNT jamming and spoofing in Crimea, Syria, and Russia.” 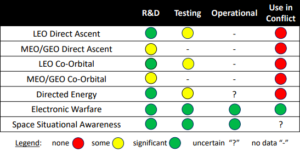 SWF provides worrying details from expert space watchers on Russia’s four July-launched RPO satellites in LEO: Cosmos 2535, 2536, 2537 and 2538. Moscow insists that at least two of the smallsats are designed for inspection and servicing missions. However, their activities — that have included the “energetic” release of debris — have led to widespread suspicion that they are experimental ASATs, likely related to the “Burevestnik co-orbital ASAT program and could be involved in the testing of aerosols or charged particles.”

Further, SWF finds that observations by amateur space-watchers “strongly suggest” that the December 2019 release of a cubesat, called Cosmos 2543, by its parent satellite, the November-launched Cosmos 2542, was designed to allow the cubesat to observe a National Reconnaissance Office (NRO) imagery satellite, US 245. Indeed, the two satellites prompted the US to demarche Moscow, with Space Force chief Gen. Jay Raymond telling Time magazine on Feb. 10 that their behavior was “unusual and disturbing” with the potential “to create a dangerous situation.”

“The orbits of Cosmos 2543 and USA 245 are synchronized such that Cosmos 2543 came within 20 km of USA 245 several times in January 2020 and since then periodically comes within 150 to 300 km of USA 245 while the latter is illuminated by the Sun and can observe both sides of USA 245 continuously for up to a week at a time,” the SWF study explains.

Both CSIS and SWF find that neither North Korea nor Iran are anywhere near development of working ASAT capabilities. On the other hand, the studies agree, both countries are improving their electronic warfare and cyber capabilities for damaging satellite operations.

As for India, which conducted its first ASAT test in March 2019, CSIS and SWF say it remains unclear whether India is moving toward an operational program or whether it instead will be content simply to have demonstrated that it can.

“Although India has had a recent successful direct-ascent ASAT test, other types of counterspace weapons are far from developed. As India focuses more on building out its space assets, as well as its counterspace assets, subsequent counterspace weapons tests may occur,” CSIS states. “While the 2019 ASAT test has certainly caused great debate in the international space community, the muted official international response sets a different precedence from the Chinese 2007 test. With little to no repercussions, India demonstrated that a lower-altitude ASAT test may be accepted by the international community,” the study cautions. 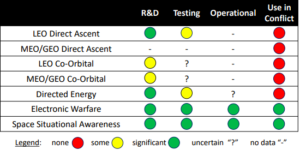 Unlike CSIS, the SWF report includes substantive research on the activities of the United States. SWF finds that the US has substantial capabilities on the ground and in space that could be used to attack satellites — indeed, the US has demonstrated myriad potential ASAT capabilities dating back to the dawn of the space age.

As I reported last April, the US Geosynchronous Space Situational Awareness Program (GSSAP) constellation of four satellites — that the US says is for “neighborhood watch” in space — has been maneuvered to closely shadow a number of foreign satellites. Two more GSSAP satellites are due to be orbited by the end of the year.

Washington, however, has only admitted to having one counterspace weapon, the Counter Communications System (CCS) jammer. The new US Space Force announced that the latest upgrade to CCS, called Block 10.2, achieved initial operating capabilityon March 9.

Further, the study says that the creation of the Space Force and its sister operational command Space Command “may take on a stronger counterspace role.” The study says: “It is possible that the United States has also begun development of new offensive counterspace capabilities, although there is no publicly available policy or budget direction to do so.”

This year, the SWF study  also includes new chapters on France and Japan — both countries that have expressed interest in pursuing ASAT weaponry. For France, the study points to the the new French Space Defense Strategy and plans for ground-based lasers and guardian satellites, which Breaking D reported on back in July.

SWF finds that Japan “is currently undergoing a major reorganization of its military space activities and development of enhanced SSA capabilities to support military and civil applications.” In sum, the report says: “While Japan does not have any acknowledged offensive counterspace capabilities, it is actively exploring whether to develop them. Japan does have a latent ASAT capability via its missile defense system but has never tested it in that capacity.”