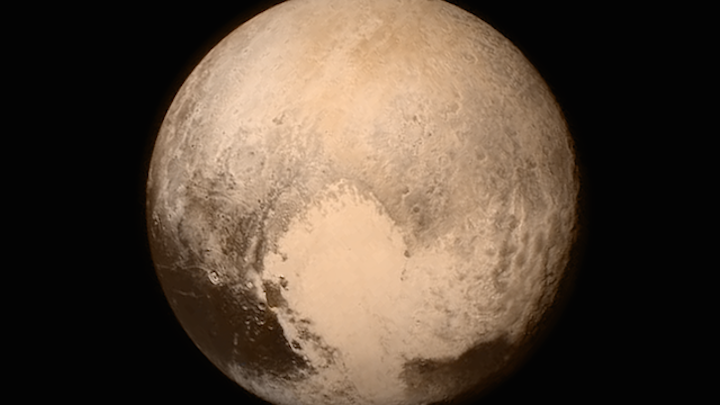 Ever since the New Horizons space probe flew past Pluto, the once-designated ninth planet in the solar system has been a source of fascination for scientists and lay people alike. Pluto, which for most of the time since it was discovered in 1930 by Clyde Tombaugh, was just a dot that could be viewed only by telescopes, became a strange and unique world in 2015 when New Horizons sent images and data back to Earth over billions of miles.

Pluto’s surface is comprised of plains of nitrogen ice and huge mountains of water ice of various colors. The currently-designated dwarf planet is thought to have a subsurface ocean, similar to what is thought to reside beneath the surfaces of Europa, a moon of Jupiter, and Enceladus, a moon of Saturn. Its atmosphere consists of nitrogen, methane and carbon monoxide. Pluto has five moons, including Charon, about half the diameter and an eighth of the mass of the dwarf planet.

New Horizons has made so many discoveries about Pluto that it is only natural that plans are being made to mount a follow-up expedition. NASA has contracted with the Southwest Research Institute to conduct a study for a probe that would orbit Pluto for two years before leaving to explore Kuiper Belt objects beyond. The Institute is managing New Horizons, which currently is flying through the Kuiper Belt, exploring some of the objects located there, including most recently one called Ultima Thule.

Alan Stern, the principal investigator for New Horizons, has stated that the SWRI is considering a probe similar to the Dawn mission, which used a solar-powered ion engine to explore Vesta and the dwarf planet Ceres. Instead of solar panels, the Pluto orbiter would use a nuclear power source. The propulsion system would shorten the probe’s travel time to Pluto and would enable it to explore other objects beyond Pluto after its mission there concludes.

If the Pluto orbiter gets funding and wrests more scientific knowledge from Pluto and beyond, one question remains that it will likely not answer: Whether or not Pluto should be restored to its status as a full-fledged planet.

Between 1930 and 2006, most scientists considered Pluto to be the ninth planet of the solar system. But the International Astronautical Union met to discuss how a planet should be defined. The IAU eventually agreed on the definition of a planet as being in orbit around the sun, of having rounded itself into a sphere and of having cleared its vicinity of other objects. Pluto failed to meet the third criterion, so it was summarily downgraded from a planet to a dwarf planet.

Many scientists refused to accept that decision, especially Alan Stern, finding it to be arbitrary. The controversy simmered for several years before last August, when NASA Administrator Jim Bridenstine announced that he believed Pluto should have its status as a planet restored.

Bridenstine reiterated his belief that Pluto is a planet at October's meeting of the International Astronomical Conference.

“I am here to tell you, as the NASA Administrator, I believe Pluto is a planet,”  Bridenstine said.

Bridenstine aroused the ire of Neil deGrasse Tyson, a celebrity astrophysicist and an early proponent of downgrading Pluto from its former status as a planet. “Anyone who states their pedigree just before issuing a statement is arguing from authority, which may or may not be based on evidence,” Tyson tweeted.

Tyson, who is more often on television than in the laboratory, derives his authority from not only being an astrophysicist but also from being the self-declared heir of the late Carl Sagan, a great popularizer of science in the 20th century, having authored many books and TV shows such as “Cosmos.”

Bridenstine, as many have pointed out, is not a scientist. His training and experience is in business, the military and politics. But he knows how to talk to scientists as NASA administrator. Considering the arbitrary way Pluto was downgraded, Bridenstine’s opinion is just as valid as Tyson’s or, for that matter, that of Alan Stern, the world’s greatest expert on Pluto.

In any case, the controversy will not be going away anytime soon.