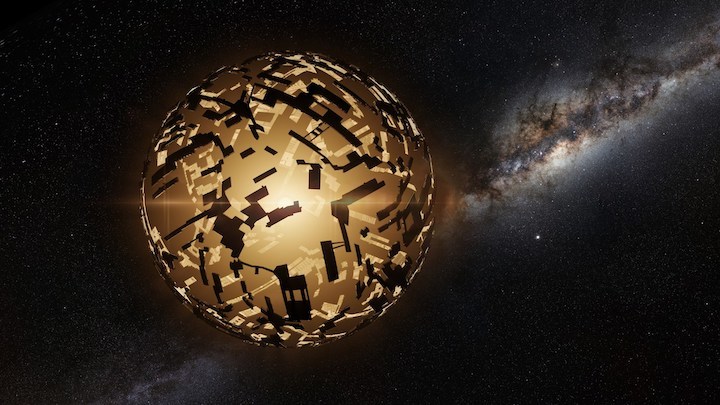 Physicist Freeman Dyson suggested the idea that advanced aliens might construct giant megastructures around their stars.

If you’re trying to come up with the best game plan for proving the existence of extraterrestrials, you’ve got plenty of options. Naturally, you want a strategy with a high chance of success, simply in the interests of time, money and a shot at the Nobel Prize.

For nearly 70 years the scheme favored by most scientists has been to look for signals — radio transmissions. That’s the classic approach of SETI (the search for extraterrestrial intelligence), and frankly, it makes sense. Radio can easily traverse light-years, and the technology for detecting it is well known and highly sensitive.

But is looking for signals really the best plan? Is it possible that we’re making the wrong bet?

There’s an attractive alternative: searching for physical artifacts — alien structures. We’re not talking about crop circles or other odd phenomena here on Earth. We’re talking about massive engineering works that an advanced society has constructed somewhere in space.

Why search for artifacts? Because it eliminates the requirement that the aliens have chosen to get in touch — to transmit radio signals our way. Sure, maybe they’d want to do that, but then again maybe they’d rather lay low. If you’re not sure you’re the Milky Way’s top-dog society, you don’t want to bet the farm by assuming that the alpha aliens, wherever they might be, have good intentions. Silence could have survival value.

There’s another point: Picking up an alien civilization’s transmissions requires that the signal reach your telescope at the very moment that you’re pointing it in their direction. This is SETI’s well-known “synchronicity” problem, and it’s been likened to firing a bullet and expecting that it will intercept, head-on, another bullet shot by someone else. Improbable.

In nearly every radio SETI experiment, the amount of time spent listening at any given frequency is but a few minutes. The universe has been around for nearly ten thousand trillion minutes, so SETI efforts are a bit like stepping into the backyard hoping you’re just in time to catch a raccoon stealing the cat food.

Of course, you can believe the aliens have some good reason to spend lots of time transmitting to Earth, but if they’re even a short distance away (astronomically speaking), they won’t know we’re here — there hasn’t been enough time for our radar and television signals to reach them yet, even at the speed of light.

In contrast, artifacts may be lurking in space just waiting our discovery, all night, every night. China’s Great Wall and the Egyptian pyramids are earthly constructions that have existed for centuries. Finding them doesn’t demand much synchronicity.

Have we found any alien megastructures? In 2015, astronomer Tabetha Boyajian and her colleagues reported on a star 1,400 light-years away that occasionally dimmed. Actually, it dimmed a lot, and this wasn’t normal stellar behavior.

One explanation was that the star was surrounded by a Dyson sphere. The idea, proposed years ago by physicist Freeman Dyson, is that really advanced aliens would construct a gargantuan, spherical swarm of solar panels in orbit beyond their own planet — sort of the way you might cup your hands around a candle to collect the heat. The swarm would gather enough starlight to energize the aliens’ souped-up lifestyles, and could sometimes get in the way of light from the star, causing it to intermittently dim as seen from afar.

That explanation for Tabby’s star seems less likely today. Astronomical measurements show that it gets redder when it dims, suggesting that it’s surrounded by naturally produced dust, not a gargantuan group of light collectors.

But it’s reasonable to believe that Dyson spheres exist somewhere. In the past, astronomers looked for clues to such massive engineering projects by trawling star catalogs for systems that show an excess of infrared light — produced by the warm backside of the panels. Another approach is to comb through data from the European Space Agency’s Gaia space telescope to find stars whose light is fainter than expected, simply because their shine is partially, and constantly, blocked by a bunch of panels.

Recently, University of Chicago physicist Daniel Hooper offered a new idea for searching for high-tech alien artifacts. He notes that the universe is expanding, and galaxies are growing ever farther apart. So forward-thinking alien societies might want to grab stars from nearby galaxies while they can and park them in their cosmic neighborhoods as a hedge against future energy scarcity. This is akin to storing gasoline if you’re worried about a developing shortage. If collections of corralled stars do exist, they’d be easy to spot in the course of mainstream astronomy research.

Looking for extraterrestrial signals has a venerable history and no doubt a promising future. But a search for structures accumulated during the many billions of years of cosmic time might give someone a leg up on that Nobel.

Yes, efforts to find Dyson spheres have come up empty. And we haven’t found any stellar stockpiles either. But tomorrow could be different.

Astronomie - Why alien 'megastructures' may hold key to making contact with extraterrestrials Looking for evidence of Dyson spheres might be more fruitful than listening for radio transmissions.
1965 Views
Created with page4