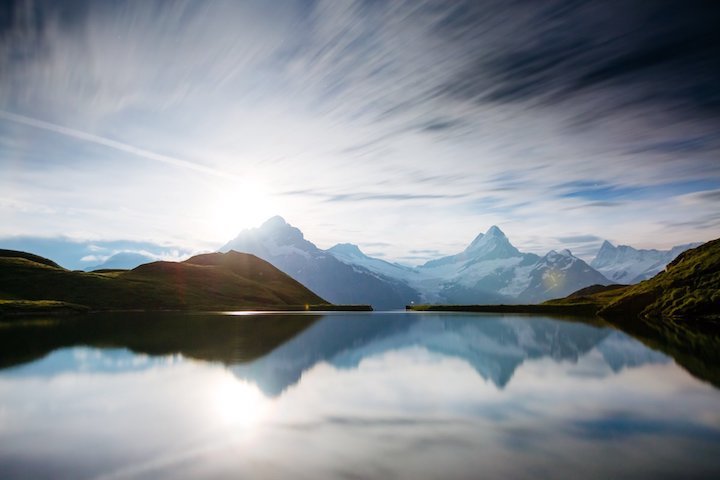 Like a mountain looming over a calm lake, it seems the universe may once have had a perfect mirror image. That's the conclusion a team of Canadian scientists reached after extrapolating the laws of the universe both before and after the Big Bang.

Physicists have a pretty good idea of the structure of the universe just a couple of seconds after the Big Bang, moving forward to today. In many ways, fundamental physics then worked as it does today. But experts have argued for decades about what happened in that first moment — when the tiny, infinitely dense speck of matter first expanded outward — often presuming that basic physics were somehow altered.

Researchers Latham Boyle, Kieran Finn and Neil Turok at the Perimeter Institute for Theoretical Physics in Waterloo, Ontario, have turned this idea on its head by assuming the universe has always been fundamentally symmetrical and simple, then mathematically extrapolating into that first moment after the Big Bang.

That led them to propose a previous universe that was a mirror image of our current one, except with everything reversed. Time went backward and particles were antiparticles. It's not the first time physicists have envisioned another universe before the Big Bang, but those were always seen as separate universes much like our own.

"It's like our universe today were reflected through the Big Bang. The period before the universe was really the reflection through the bang,” Boyle said.

Imagine cracking an egg in this anti-universe. First, it would be made entirely of negatively charged antiprotons and positively charged anti-electrons. Secondly, from our perspective in time, it would seem to go from a puddle of yolk to a cracked egg to an uncracked egg to inside the chicken. Similarly, the universe would go from exploding outward to a Big Bang singularity and then exploding into our universe.

But seen another way, both universes were created at the Big Bang and exploded simultaneously backward and forward in time. This dichotomy allows for some creative explanations to problems that have stumped physicists for years. For one, it would make the first second of the universe fairly simple, removing the necessity for the bizarre multiverses and dimensions experts have used for three decades to explain some of the stickier aspects of quantum physics and the Standard Model, which describes the zoo of subatomic particles that make up our universe.

"Theorists invented grand unified theories, which had hundreds of new particles, which have never been observed — supersymmetry, string theory with extra dimensions, multiverse theories. People just basically kept on going inventing stuff. No observational evidence has emerged for any of it," Turok said.[5 Elusive Particles Beyond the Higgs | Quantum Physics]

Similarly, this theory would offer a much simpler explanation for dark matter, Boyle said.

"Suddenly, when you take this symmetric, extended view of space/time," Boyle told Live Science, "one of the particles that we already think exists — one of the so-called right-handed neutrinos — becomes a very neat dark-matter candidate. And you don't need to invoke other, more speculative particles." (Boyle is referring to a theoretical sterile neutrino, which would pass through ordinary matter without interacting with it at all.)

The scientists say this new theory grew out of a dissatisfaction with the bizarre add-ons proposed by physicists in recent years. Turok himself helped develop such explanations but felt a deep desire for a simpler explanation of the universe and the Big Bang. They also say this new theory has the benefit of being testable. Which will be crucial in winning over doubters.

"If someone can find a simpler version of the history of the universe than the existing one, then that's a step forward. It doesn't mean it's right, but it means it's worth looking at," said Sean Carroll, a cosmologist at the California Institute of Technology who was cited in the paper but was not involved in the research. He pointed out that the current favorite candidate for dark matter — weakly interacting massive particles, or WIMPs — haven't been found and it might be time to consider other options, including possibly the right-handed neutrinos Boyle mentioned. But, he said, he's a long way from being persuaded and calls the paper "speculative."

The Canadian team understands this and they will be using the model to propose measurable, testable elements to see if they are correct, they said. For instance, their model predicts the lightest neutrinos should actually be devoid of mass altogether. If they are right, it might reshape how we see the universe.

"It's very dramatic. It completely runs counter to the way that physics has been going for the last 30 years, including by us," Turok said. "We really asked ourselves, could there not be something simpler going on?"