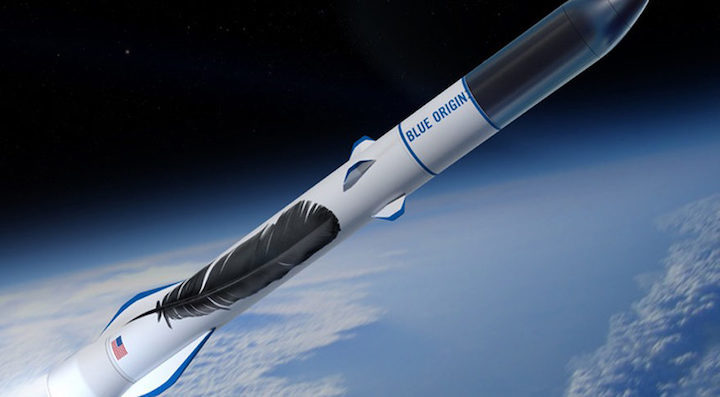 This story was updated July 13 with new information about New Glenn’s GEO capabilities.

“Our first five are all dedicated missions as we release margin and prove out our operational reusability concept,” McFarland said July 4 at the APSAT 2018 conference here. “But starting from launch six on, we will have a dual-manifesting capability. Coupled with a 13-metric-ton to GEO — to actual GEO insertion — capability at that point, it will be a fairly significant achievement.”

New Glenn’s first launch is slated for late 2020, and is designed from the start to feature a reusable first stage. McFarland said most customers prefer a dedicated launch, rather than sharing a rocket with a co-passenger, but Blue Origin is preparing to have dual launch as an option for those seeking to split the price of a mission with another satellite operator.

New Glenn’s dual-launch arrangement will allow two satellites to launch together without having to coordinate mass differences, as is done on Arianespace’s heavy-lift Ariane 5, he said. Ariane 5, Europe’s flagship launch vehicle, launches most missions with two spacecraft, but the second satellite has to be smaller to fit in the rocket’s lower berth.

“That will allow two or possibly even more spacecraft to be carried inside the fairing volume,” he said.

To date Arianespace is the only launch provider to consistently champion dual launch for satellite operators wanting to send their spacecraft to geostationary transfer orbits. Other launch providers on the same panel — SpaceX, International Launch Services and Mitsubishi Heavy Industries — said they can all do dual launches but find dedicated launches preferable.

“When we came into the market, one of our key selling points was that we are a dedicated launch,” said Jonathan Hofeller, SpaceX’s vice president of commercial sales. “Across the board our customers don’t like dual launch. They love the price, [but] they don’t offer the flexibility.”

SpaceX has conducted two dual-manifested Falcon 9 launches, each carrying one satellite for ABS and Eutelsat, but has since only performed dedicated missions when launching GEO-bound satellites.

“[We are] trying to be more flexible and trying to keep schedule assurance, so we are much more focused on the dedicated launch,” he said.

“It becomes tricky when you are trying to match the two customers from a schedule standpoint,” said Kevin Reyes, senior director of Asia-Pacific sales for International Launch Services, the Reston, Virginia-based subsidiary of Russia’s Proton rocket builder Khrunichev.

Reyes said customers are generally unwilling to tolerate co-passenger delays, making arrangements for dual launches difficult. ILS has a dual-launch capability with Proton and will keep that option for the smaller Proton Medium when it debuts in 2020, but Reyes said ILS’s biggest value proposition is instead its direct-to-geosynchronous-orbit (GSO) launches.

That provides a quicker path to market, he said, adding that operators of all-electric satellites can avoid months of orbit-raising with direct-GSO missions.

Hofeller said Falcon Heavy, which had its first launch in February, gives SpaceX a direct-to-GSO capability as well.

Blue Origin’s McFarland said Blue Origin won’t let schedule disruptions with one payload impact the co-passenger in dual-launch missions, even if it means splitting the missions in two.

“We are not going to [let this] hold back or delay a launch,” he said. “We are going for a cadence of up to eight times per year where we will launch. If we don’t have a second, we still go as a single. So that’s the plan, [with] the same price point for the launch service for the customer.”