Different types of clouds and aerosols can be found at varying heights in the atmosphere. Depending on their properties and location, they can have varying radiative effects on Earth’s climate system.

Turn on any local TV weather forecast and you can get a map of where skies are blue or cloudy. But for scientists trying to figure out how clouds affect the Earth’s environment, what's happening inside that shifting cloud cover is critical and hard to see.
To investigate the layers and composition of clouds and tiny airborne particles like dust, smoke and other atmospheric aerosols, , scientists at NASA’s Goddard Space Flight Center in Greenbelt, Maryland have developed an instrument called the Cloud-Aerosol Transport System, or CATS. The instrument, which launches to the International Space Station in December 2014, will explore new technologies that could also be used in future satellite missions.
From space, streaks of white clouds can be seen moving across Earth’s surface. Other tiny solid and liquid particles called aerosols are also being transported around the atmosphere, but these are largely invisible to our eyes. Aerosols are both natural and man-made, and include windblown desert dust, sea salt, smoke from fires, sulfurous particles from volcanic eruptions, and particles from fossil fuel combustion.
Currently, scientists get a broad picture of clouds and air quality conditions in the atmosphere and generate air quality forecasts by combining satellite, aircraft, and ground-based data with sophisticated computer models. However, most datasets do not provide information about the layered structure of clouds and aerosols.
CATS will provide data about aerosols at different levels of the atmosphere. The data are expected to improve scientists' ability to track different cloud and aerosol types throughout the atmosphere. These datasets will be used to improve strategic and hazard-warning capabilities of events in near real-time, such as tracking plumes from dust storms, volcanic eruptions, and wildfires. The information could also feed into climate models to help understand the effects of clouds and aerosols on Earth’s energy balance.
Clouds and aerosols reflect and absorb energy from the sun in a complex way. For example, when the sun’s energy reaches the top of the atmosphere, clouds can reflect incoming sunlight, cooling Earth’s surface. However, clouds can also absorb heat emitted from Earth and re-radiate it back down, warming the surface. The amount of warming or cooling is heavily dependent on the height, thickness, and structure of clouds in the atmosphere above.
"Clouds are one of the largest uncertainties in predicting climate change," said Matt McGill, principal investigator and payload developer for CATS at Goddard. “For scientists to create more accurate models of Earth’s current and future climate, they’ll have to include more accurate representations of clouds."
That’s where a new instrument like CATS comes in. CATS is a lidar – similar to a radar, but instead of sending out sound, lidars use light. CATS will send a laser pulse through the atmosphere towards a distant object like a cloud droplet or aerosol particle. Once the energy reaches the object, some of the energy is reflected back to the lidar receiver. Scientists can calculate the distance between the instrument and the object, based on the time it takes the energy to return to the receiver, thereby determining the altitudes of cloud and aerosol layers. The intensity of this return pulse also allows scientists to infer other properties, such as the composition of clouds, and the abundance and sizes of aerosols,.
In 2006 NASA launched the Cloud-Aerosol Lidar and Infrared Pathfinder Satellite Observations, or CALIPSO, spacecraft—a joint mission between NASA and France’s space agency, the Centre National d’Études Spatiales. CALIPSO carries a lidar that provides vertical distributions and properties of clouds and aerosols along a flight track. However, the CALIPSO lidar has exceeded its three-year prime mission and has been using its backup laser since 2009.
A unique opportunity to continue gathering this type of data presented itself in 2011 when the International Space Station Progam’s NASA Research Office offered scientists at Goddard a mounting location aboard the space station for a new lidar instrument – CATS, and provided the funding for its construction.
Designed to operate for at least six months, CATS has a goal of operating for three years. With beams at three wavelengths (1064, 532, and 355 nanometers), CATS will be used to derive a variety of properties of cloud and aerosol layers. These properties include layer height, layer thickness, and at least coarse information on the type of aerosols and cloud in various atmospheric layers.
CATS will orbit aboard the space station, which flies at an altitude between 230 miles (375 kilometers) and 270 miles (435 kilometers) above Earth’s surface at a 51-degree inclination. This unique orbit path will allow the CATS instrument to observe locations at different times of day and allow scientists to study day-to-night changes in cloud and aerosol effects from space.
Studying clouds and aerosols won’t just help scientists study the climate, it’s also a chance to investigate air quality and how atmospheric particles affect daily life. That can range from volcano ash plumes, to dust storms, to pollution outbreaks, to wildfires, like the California Rim Fire in September 2013 that choked Yosemite National Park during the busy Labor Day weekend. These particles pose health risks to populations, especially to the medically vulnerable,  By infusing CATS data directly into aerosol models, data from CATS can make a difference in tracking and responding to impacts of similar events in the future.
. 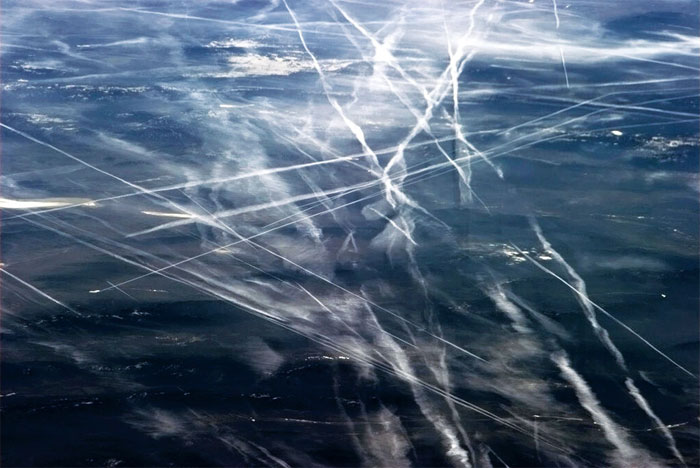 The interactions between clouds and aerosols are illustrated in this image, taken by retired astronaut Chris Hadfield onboard the International Space Station. It shows contrails produced by aircraft (bright streaks) over the ocean.
Quelle: NASA
Raumfahrt
« Zum vorherigen Eintrag Zum nächsten Eintrag »
2747 Views
Created with page4