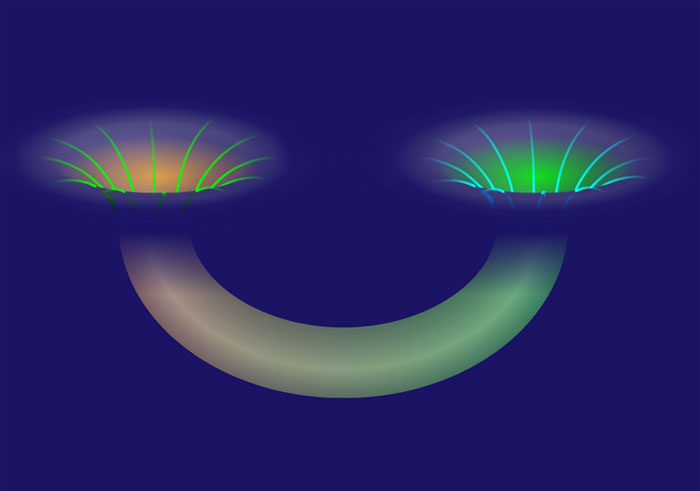 Quantum entanglement, a perplexing phenomenon of quantum mechanics that Albert Einstein once referred to as “spooky action at a distance,” could be even spookier than Einstein perceived.

Physicists at the University of Washington and Stony Brook University in New York believe the phenomenon might be intrinsically linked with wormholes, hypothetical features of space-time that in popular science fiction can provide a much-faster-than-light shortcut from one part of the universe to another.
But here’s the catch: One couldn’t actually travel, or even communicate, through these wormholes, said Andreas Karch, a UW physics professor.
Quantum entanglement occurs when a pair or a group of particles interact in ways that dictate that each particle’s behavior is relative to the behavior of the others. In a pair of entangled particles, if one particle is observed to have a specific spin, for example, the other particle observed at the same time will have the opposite spin.
The “spooky” part is that, as past research has confirmed, the relationship holds true no matter how far apart the particles are – across the room or across several galaxies. If the behavior of one particle changes, the behavior of both entangled particles changes simultaneously, no matter how far away they are.
Recent research indicated that the characteristics of a wormhole are the same as if two black holes were entangled, then pulled apart. Even if the black holes were on opposite sides of the universe, the wormhole would connect them.
Black holes, which can be as small as a single atom or many times larger than the sun, exist throughout the universe, but their gravitational pull is so strong that not even light can escape from them.
If two black holes were entangled, Karch said, a person outside the opening of one would not be able to see or communicate with someone just outside the opening of the other.
“The way you can communicate with each other is if you jump into your black hole, then the other person must jump into his black hole, and the interior world would be the same,” he said.
The work demonstrates an equivalence between quantum mechanics, which deals with physical phenomena at very tiny scales, and classical geometry – “two different mathematical machineries to go after the same physical process,” Karch said. The result is a tool scientists can use to develop broader understanding of entangled quantum systems.
“We’ve just followed well-established rules people have known for 15 years and asked ourselves, ‘What is the consequence of quantum entanglement?’”
Karch is a co-author of a paper describing the research, published in November in Physical Review Letters. Kristan Jensen of Stony Brook, a coauthor, did the work while at the University of Victoria, Canada. Funding came from the U.S. Department of Energy and the Natural Sciences and Engineering Research Council of Canada.
.
Quelle: University of Washington
wormhole
« Zum vorherigen Eintrag Zum nächsten Eintrag »
3824 Views
Created with page4