International Launch Services (ILS) have launched their Proton-M rocket from the Baikonur Cosmodrome in Kazakhstan on Tuesday, with lift off occurring at 16:02 GMT. The Proton’s Briz-M (Breeze-M) Upper Stage is now tasked with a multi-hour mission to deploy the EUTELSAT 3D telecommunications satellite into its desired transfer orbit.
Proton M Launch:
The Proton booster that was used to launch the satellite is 4.1 m (13.5 ft) in diameter along its second and third stages, with a first stage diameter of 7.4 m (24.3 ft). Overall height of the three stages of the Proton booster is 42.3 m (138.8 ft).
The Proton vehicle has a heritage of nearly 400 launches since 1965 and is built by Khrunichev Research and State Production Center, one of the pillars of the global space industry and the majority owner of ILS.
The first stage consists of a central tank containing the oxidizer surrounded by six outboard fuel tanks. Each fuel tank also carries one of the six RD-276 engines that provide first stage power. Total first stage vacuum-rated level thrust is 11.0 MN (2,500,000 lbf).
Of a conventional cylindrical design, the second stage is powered by three RD-0210 engines plus one RD-0211 engine and develops a vacuum thrust of 2.4 MN (540,000 lbf).
Powered by one RD-0213 engine, the third stage develops thrust of 583 kN (131,000 lbf), and a four-nozzle vernier engine that produces thrust of 31 kN (7,000 lbf). Guidance, navigation, and control of the Proton M during operation of the first three stages is carried out by a triple redundant closed-loop digital avionics system mounted in the Proton’s third stage.
The Briz-M (Breeze-M) upper stage is the Phase III variant, a recent upgrade which utilizes two new high-pressure tanks (80 liters) to replace six smaller tanks, along with the relocation of command instruments towards the centre – in order to mitigate shock loads when the additional propellant tank is being jettisoned.
The launch is utilizing a 5-burn Breeze M mission design. The first three stages of the Proton used the standard ascent profile to place the orbital unit (Breeze M upper stage and the EUTELSAT 3D satellite) into a sub-orbital trajectory.
From this point in the mission, the Breeze M will perform planned mission maneuvers to advance the orbital unit first to a circular parking orbit, then to an intermediate orbit, followed by a transfer orbit, and finally to a geosynchronous transfer orbit.
Separation of the EUTELSAT 3D satellite is scheduled to occur approximately 9 hours, 13 minutes after liftoff.
EUTELSAT 3D will bring resources, reach and flexibility for high-growth professional video, data, telecom and broadband services at 3 degrees east, an orbital position that sits at the crossroads of Europe, Africa and Asia.
Through a configuration of Ku and Ka transponders connected to three footprints, Eutelsat’s new satellite will serve customers in Europe, North Africa, the Middle East and Central Asia. A fourth footprint in the Ku-band will serve customers in sub-Saharan Africa.
EUTELSAT 3D will be located at 3 degrees east until the launch in 2014 of EUTELSAT 3B that will further extend coverage to South America. It will subsequently continue service at 7 degrees east.
The satellite’s Spacebus 4000 Platform sports 56 Ku and Ka-band transponders and has a mass of 5,470 kg. It has an anticipated service life of 15 years.
This will be the third ILS Proton launch in 2013 and the 80th ILS Proton launch overall. This mission will also mark the seventh Eutelsat Satellite to be launched on Proton, the ninth for Thales Alenia Space Satellite. 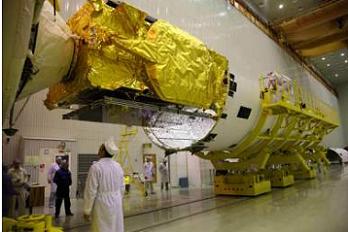 Quelle: ILS
.
The EUTELSAT 3D satellite of Eutelsat Communications (Euronext Paris: ETL) has been successfully launched by a Proton Breeze M rocket supplied by ILS and is now on its way to its operating location at 3° East.
Lift-off of the satellite, built by Thales Alenia Space, took place on 14 May at 16.02 GMT (18.02 CET). Following a 9-hour 13-minute flight, Proton released EUTELSAT 3D into geosynchronous transfer orbit. The partial deployment of the satellite’s solar panels was successfully carried out from Eutelsat’s control centre in Rambouillet three hours and 15 minutes after separation from the rocket.
Eutelsat also announces that it has signed a new launch contract with ILS for a satellite to be launched in the 2014-2016 timeframe. This will be the eighth satellite to be launched for Eutelsat by the Proton launcher.
Michel de Rosen, Eutelsat CEO, said: “We are delighted to confirm that EUTELSAT 3D is on its way to 3° East. From next month, this new satellite will take service at 3° East to a new level in advance of the launch in 2014 of EUTELSAT 3B. Our thanks to Thales Alenia Space for delivering our new satellite and to ILS and Khrunichev for this flight which maintains our track record of 100% success since our first Proton launch in 2000. We are pleased to renew our confidence in the powerful Proton launcher with a new contract that gives us the scope to increase our operational agility, a key asset in our business.”
ILS President Phil Slack added: “The Proton vehicle and Eutelsat partnership dates back 13 years starting with the SESAT 1 launch on Proton in 2000.  After seven launches, including the 50th ILS Proton launch in 2009 with the EUTELSAT 10A satellite, we are honoured that Eutelsat continues to place their trust in us to enable the expansion of their business. Many thanks to the Eutelsat, Thales Alenia Space, Khrunichev and ILS teams for ensuring mission success with the launch of EUTELSAT 3D.”
With a baseline design equipping it to strengthen Eutelsat’s overall in-orbit flexibility and back-up from multiple orbital slots, EUTELSAT 3D will be initially located at 3° East to address high-growth video, data, telecom and broadband markets. It will serve customers in Europe, North Africa, the Middle East and Central Asia through a configuration of Ku and Ka transponders connected to three footprints. A fourth service area in the Ku-band will serve markets in sub-Saharan Africa. EUTELSAT 3D will operate at 3° East until the deployment of the EUTELSAT 3B satellite to this position in 2014 to provide spectrum growth and high levels of operational flexibility in C, Ku and Ka bands. It will subsequently continue service at 7° East.
EUTELSAT 3D was built for Eutelsat by Thales Alenia Space using its established Spacebus 4000 platform. The satellite is designed to operate in orbit for 15 years.
About Eutelsat Communications
Eutelsat Communications is the holding company of Eutelsat S.A. With capacity commercialised on 30 satellites delivering reach of  Europe, the Middle East, Africa, Asia, significant parts of the Americas and the Asia-Pacific, Eutelsat Communications (Euronext Paris: ETL, ISIN code: FR0010221234) is one of the world's leading satellite operators. As of 31 March 2013, Eutelsat’s satellites were broadcasting more than 4,600 television channels to over 200 million cable and satellite homes in Europe, the Middle East and Africa. The Group’s satellites also provide a wide range of services for TV contribution, corporate networks and fixed and mobile broadband markets. Headquartered in Paris, Eutelsat and its subsidiaries employ over 780 commercial, technical and operational professionals from 30 countries.
« Zum vorherigen Eintrag Zum nächsten Eintrag »
3886 Views
Created with page4