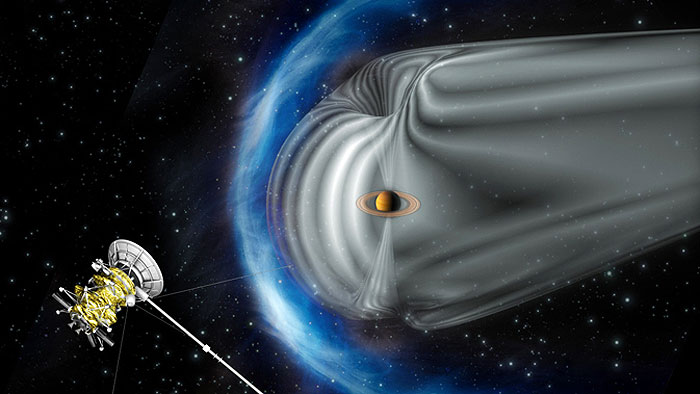 During a chance encounter with what appears to be an unusually strong blast of solar wind at Saturn, NASA's Cassini spacecraft detected particles being accelerated to ultra-high energies. This is similar to the acceleration that takes place around distant supernovas.
Since we can't travel out to the far-off stellar explosions right now, the shockwave that forms from the flow of solar wind around Saturn's magnetic field provides a rare laboratory for scientists with the Cassini mission -- a partnership involving NASA, the European Space Agency and the Italian Space Agency -- to observe this phenomenon up-close. The findings, published this week in the journal Nature Physics, confirm that certain kinds of shocks can become considerably more effective electron accelerators than previously thought.
Shock waves are commonplace in the universe, for example in the aftermath of a stellar explosion as debris accelerate outward in a supernova remnant, or when the flow of particles from the sun - the solar wind - impinges on the magnetic field of a planet to form a bow shock. Under certain magnetic field orientations and depending on the strength of the shock, particles can be accelerated to close to the speed of light at these boundaries. These may be the dominant source of cosmic rays, high-energy particles that pervade our galaxy.
Scientists are particularly interested in "quasi-parallel" shocks, where the magnetic field and the "forward"-facing direction of the shock are almost aligned, as may be found in supernova remnants. The new study, led by Adam Masters of the Institute of Space and Astronautical Science, Sagamihara, Japan, describes the first detection of significant acceleration of electrons in a quasi-parallel shock at Saturn, coinciding with what may be the strongest shock ever encountered at the ringed planet.
"Cassini has essentially given us the capability of studying the nature of a supernova shock in situ in our own solar system, bridging the gap to distant high-energy astrophysical phenomena that are usually only studied remotely," said Masters.
The Cassini-Huygens mission is a cooperative project of NASA, ESA and ASI, the Italian space agency. NASA's Jet Propulsion Laboratory, a division of the California Institute of Technology in Pasadena, manages the mission for NASA's Science Mission Directorate, Washington.
. 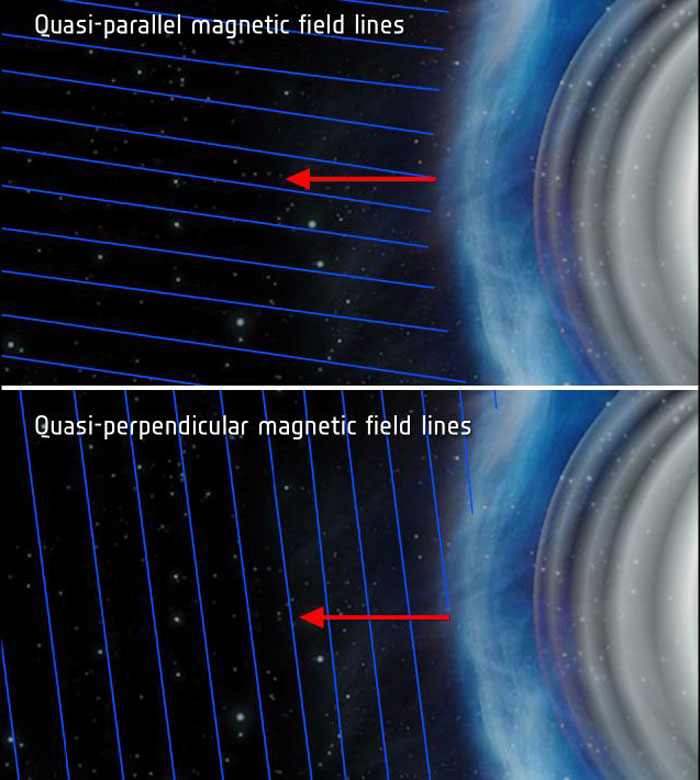 Magnetic Fields and Bow Shocks
This illustration shows "quasi-parallel" (top) and "quasi-perpendicular" (bottom) magnetic field conditions at a planetary bow shock. Bow shocks are shockwaves created when the solar wind blows on a planet's magnetic field.
Under quasi-parallel conditions, the planet's magnetic field is roughly pointing toward the shock surface, almost parallel to a vector at right angles to the shock front (red arrow). Under quasi-perpendicular conditions, the magnetic field is close to aligned with the shock surface, that is, almost perpendicular to the shock vector.
The Cassini-Huygens mission is a cooperative project of NASA, the European Space Agency and the Italian Space Agency. JPL manages the mission for NASA's Science Mission Directorate, Washington. JPL is a division of the California Institute of Technology, Pasadena.
.
Quelle: NASA
« Zum vorherigen Eintrag Zum nächsten Eintrag »
3864 Views
Created with page4