You are 200 miles directly above the Martian surface — looking down. This image was taken by the Mars Reconnaissance Orbiter on Jan. 27, 2010. (The color was added later.) What do we see? Well, sand, mostly. As you scroll down, there's a ridge crossing through the image, then a plain, then dunes, but keep looking. You will notice, when you get to the dunes, there are little black flecks dotting the ridges, mostly on the sunny side, like sunbathing spiders sitting in rows. Can you see them? 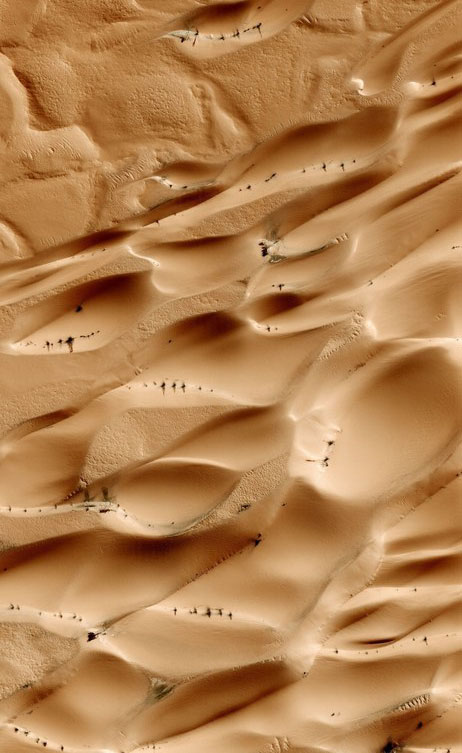 What are those things? They were first seen in 1998; they don't look like anything we have here on Earth. To this day, no one is sure what they are, but we now know this: They come, then they go. Every Martian spring, they appear out of nowhere, showing up — 70 percent of the time — where they were the year before. They pop up suddenly, sometimes overnight. When winter comes, they vanish.
As the sun gets hotter, they get more spidery. Here's a closer image — like the one above, this gorgeous print was created by the photographer Michael Benson, just published in his new book, Planetfall. It shows two mounds of sand. The spidery thingies, you'll notice, stay on the rises, not on the flat sandy plains.
- 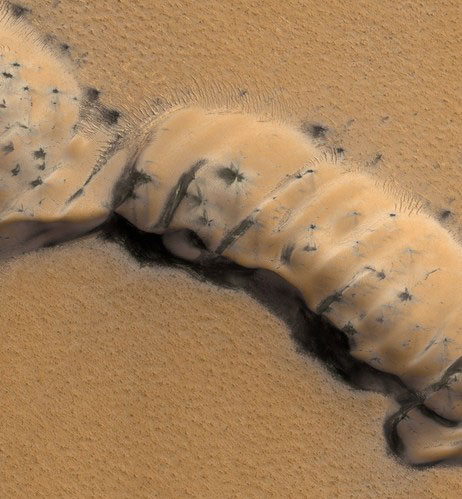 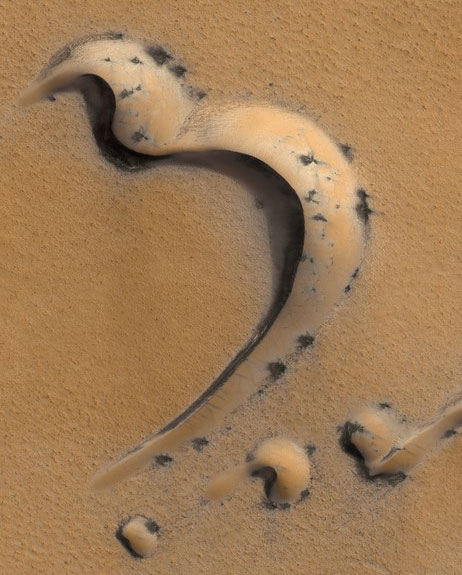 -
What could they be? Scientists from the U.S. Geological Survey, from Hungary, from the European Space Agency have all proposed explanations; the leading one is so weird, it's transformed my idea of what it's like to be on Mars. For 20 years, I've thought the planet to be magnificently desolate, a dead zone, painted rouge. But imagine this: Every spring, the sun beats down on a southern region of Mars, morning light melts the surface, warms up the ground below, and a thin, underground layer of frozen CO2 turns suddenly into a roaring gas, expands, and carrying rock and ice, rushes up through breaks in the rock, exploding into the Martian air. Geysers shoot up in odd places. It feels random, like being surprise attacked by an monstrous, underground fountain. Here's what it might look like:
- 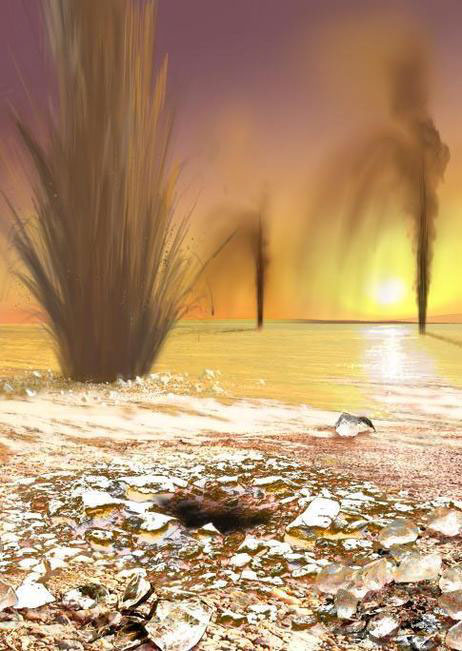 -
"If you were there," says Phil Christensen of Arizona State University, "you'd be standing on a slab of carbon dioxide ice. All around you, roaring jets of carbon dioxide gas are throwing sand and dust a couple hundred feet into the air." The ground below would be rumbling. You'd feel it in your spaceboots.
That, anyway, is the leading explanation.The spidery traces that you see in Michael's two prints might be clumps of dark, basaltic sand thrown from the geysers. Or — say a group of Hungarian scientists — they might be colonies of photosynthetic Martian microorganisms, warmed from the sun, now sunbathing in plain view. We still don't know for sure.We've been watching those spider-patches come and go for the last decade or so, and for a little while longer, we will have to guess why they're there, or what they're telling us.
We'll have to keep looking.
-
Quelle:npr / NASA
« Zum vorherigen Eintrag Zum nächsten Eintrag »
4551 Views
Created with page4