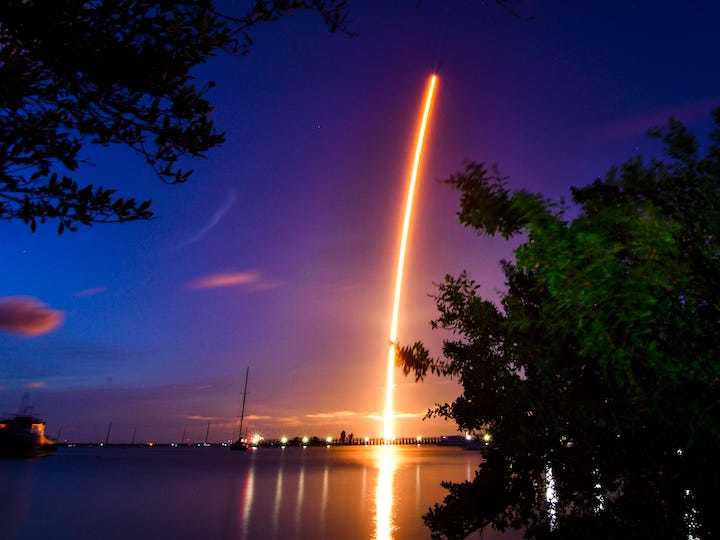 From liftoff last week to splashdown three days later, SpaceX's first fully commercial crewed mission was a start-to-finish success for the company aiming to fly many, many more private customers to Earth orbit and beyond.

The mission known as Inspiration4, made possible by payments industry billionaire Jared Isaacman, is a highlight in a wider conversation about space tourism. Dozens of companies are aiming to pull off similar adventures for their customers, even if the price tags are lower and the spacecraft entirely different.

For an undisclosed sum – easily in the tens of millions of dollars and possibly as high as $200 million based on what NASA pays for Crew Dragon seats – SpaceX took Isaacman, healthcare worker Hayley Arceneaux, professor and science communicator Sian Proctor, and engineer Chris Sembroski on a three-day flight full of spectacular visuals and science experiments. The flight began at Kennedy Space Center's pad 39A and ended just a few dozen miles away with splashdown in the Atlantic Ocean.

Isaacman covered every last cent, including tax implications for his crew. "The door is open," he said, to a future rife with professional and non-professional astronauts exploring the cosmos.

But at least one thing is clear today: even with Inspiration4's success, a full-fledged commercial spaceflight industry is still far off. As seen throughout history, the early days of exploring the next frontier belong to the ultra-wealthy and well-connected – the Vasco da Gamas, Ferdinand Magellans, and Christopher Columbuses of the 21st century.

Billionaires bankrolling spaceflights is familiar territory for 2021. It was just a couple months ago that Richard Branson and Jeff Bezos flew to space – or, in the case of Branson, the "edge of space" – with companies they founded and continue to support financially.

Countless factors made Inspiration4 different from those other flights by Virgin Galactic and Blue Origin, respectively, but one stands out the most: the Falcon 9 rocket vaulted Crew Dragon on a high-energy orbit not on the edge of space, but well beyond even that of the International Space Station.

Traveling a whopping 17,500 mph, the capsule achieved a peak altitude of 366 miles during the three-day mission. Humans hadn't traveled that far from Earth since space shuttle astronauts were tasked with Hubble Space Telescope servicing missions in the 1990s and early 2000s.

"I count (Branson and Bezos) as spaceflights and I count them as astronauts," said Jonathan McDowell, an astrophysicist at the Harvard-Smithsonian Center for Astrophysics who also maintains a detailed database of launches. "But technically in every respect, an orbital flight is much more challenging."

From reaching the higher orbit to multi-day life support for four humans to dealing with a high-energy atmospheric re-entry, Crew Dragon had its fair share of responsibilities. But those also help explain the cost of the mission, which is still accessible only to a select few.

Billionaires reaching for space began 20 years ago with Dennis Tito, who paid roughly $20 million ($31 million in 2021 dollars) for a flight to the ISS aboard a Russian Soyuz spacecraft. He is often said to be the first "space tourist" to fully fund his own trip.

"They really paved the way for this idea that some rich people are prepared to pay a ginormous amount of money for a stay of a few days in orbit around Earth," McDowell said. "Inspiration4 is a step further in that direction but not necessarily a dramatic step forward." 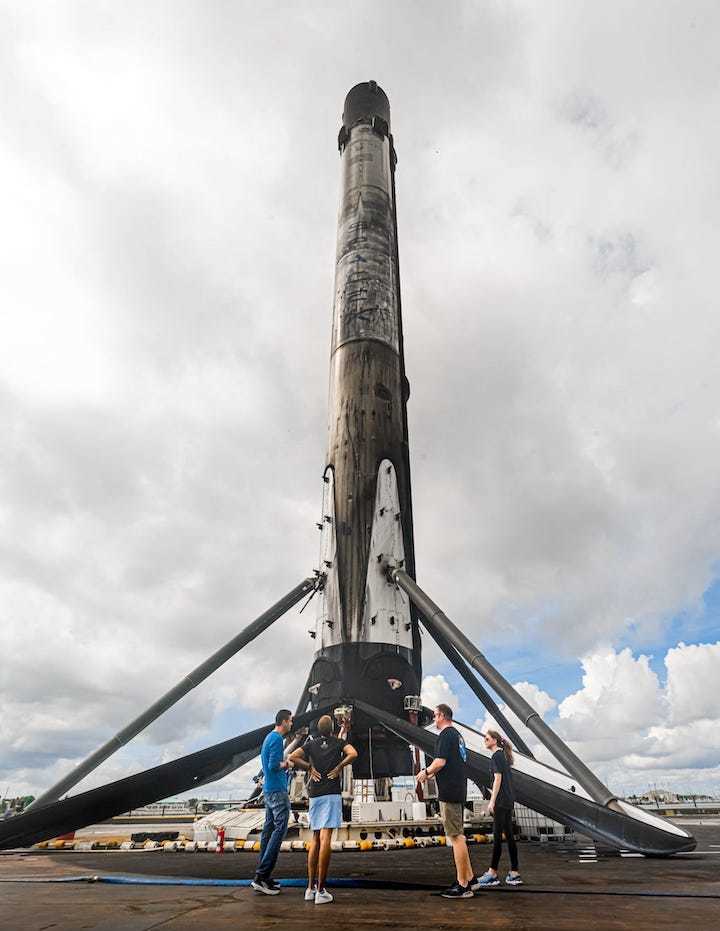 The crew of Inspiration4 is seen in front of the SpaceX Falcon 9 booster that lofted them to space.
JOHN KRAUS / INSPIRATION4

McDowell said what Inspiration4 really did, especially for SpaceX, was combine two things: the idea that wealthy tourists are willing to pay, and handing over Crew Dragon's operations entirely to SpaceX. The capsule was selected and funded by NASA in 2014 for its astronauts to fly to the ISS, so Inspiration4 was a chance for SpaceX to operate the capsule fully on its own outside the space agency's influence.

Aside from relying on NASA communications systems like the Tracking and Data Relay Satellites, or TDRS, SpaceX mission control in California was on its own.

"Inspiration4 combines the two steps of the rich tourists and SpaceX operating its own spacecraft into one mission," McDowell said. "It has the potential to be the beginning of a new era of space tourism. It's a maturing of that idea into a fully commercial environment."

"But I think it would be fair to say a trip like that is ludicrously expensive," he said. "So the question is: will it ever get to the point where the 1% can afford it and not just the 0.1%?"

Throughout the last few decades, McDowell said, the spaceflight industry – from satellite designers all the way to launch providers – has been mostly supported by launching satellites. Many missions today are still funded by government contracts and can, especially in the case of military-owned reconnaissance satellites, rack up multibillion-dollar bills.

Inspiration4's flight is a potent example of the industry's shift from satellites to space tourism as its foundation. What remains to be seen is how long that process will take and what exactly will be available to those tourists. 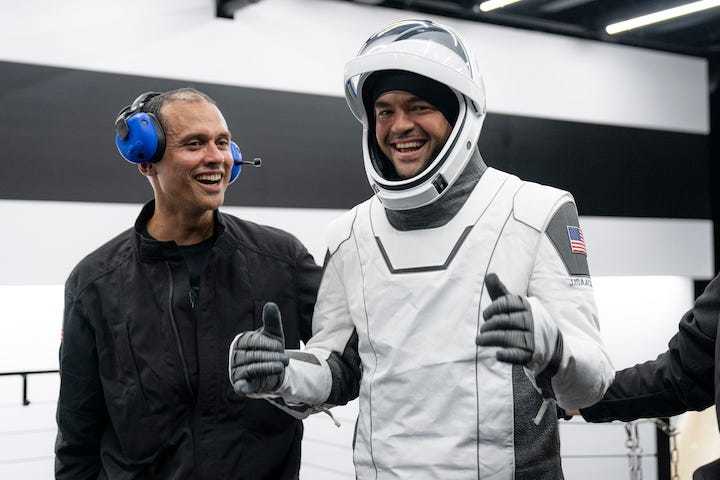 Jared Isaacman, the billionaire who purchased the Crew Dragon flight for the Inspiration4 mission, is seen after splashdown on Sept. 18, 2021.
SPACEX

In the short term, space tourists who can afford the flights can orbit Earth and enjoy spectacular views. But looking further, there need to be destinations and things to do, all of which are lacking in the oft-mentioned analogy that spaceflight today mirrors the early days of aviation. At least then there were cities to visit, family and friends to see, and new places to explore.

"Space travel over the last few decades has been sustained by communications satellites and GPS, for example," McDowell said. "The current big hope is for the short term. But in the long term, you need somewhere to go."

In the medium term, McDowell said asteroid mining could be the most direct way of establishing some form of a space-based economy. Beyond that, a staggering amount of infrastructure, life support systems, communications hardware, and much more will be needed to make long-term exploration a reality without constantly relying on Earth's support.

"Right now, I think we're talking at least a century and maybe two," McDowell said of being able to have self-sustaining colonies for both settlers and tourists. The Inspiration4 mission was a highlight in this way, too: these topics might have seemed like something out of science fiction books before, but they are at the forefront of some minds now.

"People are now starting to pick up on this and ask how they would do this sort of thing in their settlement," he said. "Now the engineers are starting to think about it."

One program that points to this kind of thinking is Starship, SpaceX's upcoming Mars-focused rocket that aims to launch hundreds of people per mission. The nearly 400-foot, two-stage rocket can help SpaceX not only take more people in one launch, but also allow customers to divide costs even more. What could be a $100 million flight, for example, would quickly drop to $1 million per person if 100 people sign up for the trip.

End of the professional astronaut? 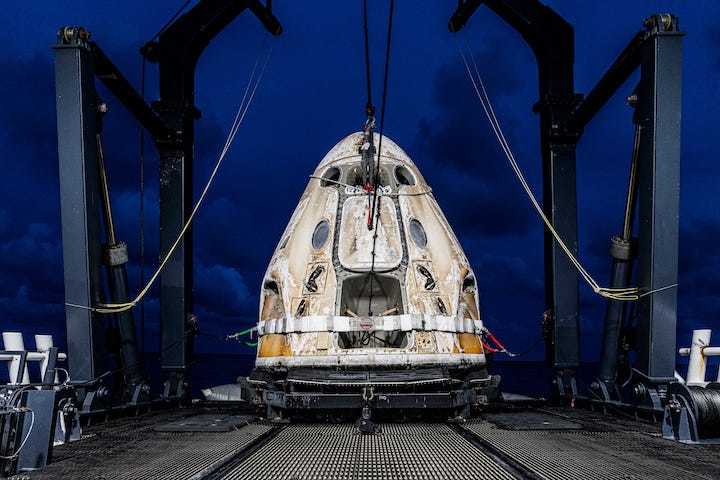 The SpaceX Crew Dragon capsule used for the Inspiration4 mission is seen immediately after recovery from the Atlantic Ocean on Sept. 18, 2021. The crew remains inside until checks are complete.  SPACEX

Sixty years ago, NASA's astronauts were the stuff of legends.

Most were military test pilots sporting buzzcuts, aviator-style sunglasses, and impressive service records stretching as far back as World War II. They were trained for a world that lacked the automation and computing power of today, so an incorrect input or calculation could have meant a swift end.

On the surface, the rise of space tourism could seem like it dulls their luster. In reality, however, it likely makes them more memorable.

"There's still going to be really cool stuff to fly and the fact that millions of us get on planes doesn't detract from that," he said. "So it's not a bad thing. It's a transition and we're in the middle of it." 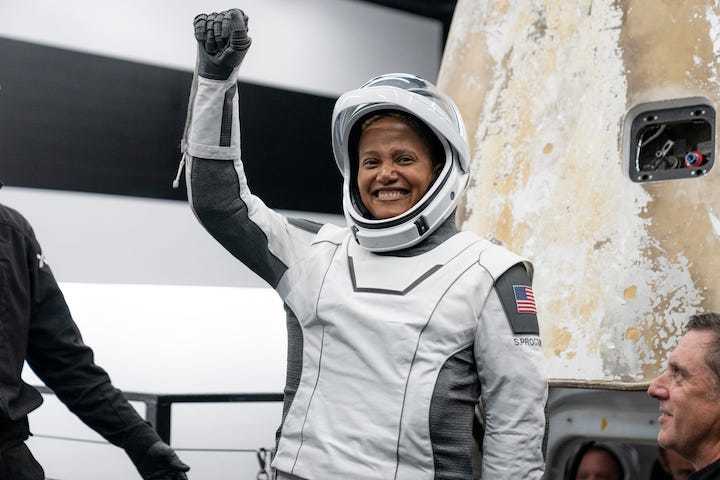 Sian Proctor, a geology professor and science communicator, is seen after Crew Dragon's splashdown on Sept. 18, 2021. She was also selected for the Inspiration4 mission thanks to an online store she set up for donations to St. Jude Children's Research Hospital.  SPACEX

As a proponent for Florida's involvement in space, Ketcham said seeing Starship's massive footprint in Texas (SpaceX builds and tests the rocket on the southernmost tip of the state near Brownsville) can be alarming to those trying to keep jobs on the Space Coast. But growth, even if some of it is outside the state, is a sign of a maturing tourism and commercial space industry.

The fact that there has been so much discussion around not only Inspiration4 but the earlier flights by Branson and Bezos speaks to the growing awareness of space tourism as something that's becoming more realistic. And despite spectators taking billionaires to task over their adventures to Earth orbit, Ketcham said it's a natural phenomenon that will eventually fade as spaceflight becomes more affordable.

"There's a reaction because it's being driven by billionaires. But we'll get through that," he said. "The very wealthy and affluent have always played a major role in human exploration endeavors around the globe, and now that phenomenon will just continue off the planet. That's a human phenomenon."

"In many ways, their contributions to those efforts are no less valuable," Ketcham said.

If there's one place that knows spaceflight – commercial or otherwise – it's NASA.

Agency leaders were quick to praise SpaceX for Inspiration4 not only because it was successful, but because the company took a vehicle funded by taxpayers and developed it into something affordable for the agency's professional astronauts while helping advance space tourism. If the capsule demonstrates continued success, it could further bring down ticket prices for NASA astronauts traveling to the ISS.

"I cannot tell you how excited I am for the SpaceX folks," Kathy Lueders, NASA's chief of human spaceflight, told Orlando National Public Radio station 90.7 WMFE. "This is like watching your kids graduate from college."

Watching SpaceX "graduate from college" was an apt comparison. The now 20-year-old company was on the verge of financial collapse when NASA came through with a cargo delivery contract in 2008, an act SpaceX chief Elon Musk says saved the day and set the trajectory of success seen today.

Inspiration4, Lueders said, is "very exciting and this is a capability that we are going to be using again at the end of October" for SpaceX's third fully operational mission to the ISS. Kayla Barron, Raja Chari, Thomas Marshburn, and Matthias Maurer are all slated to fly from KSC's pad 39A no earlier than Oct. 31. 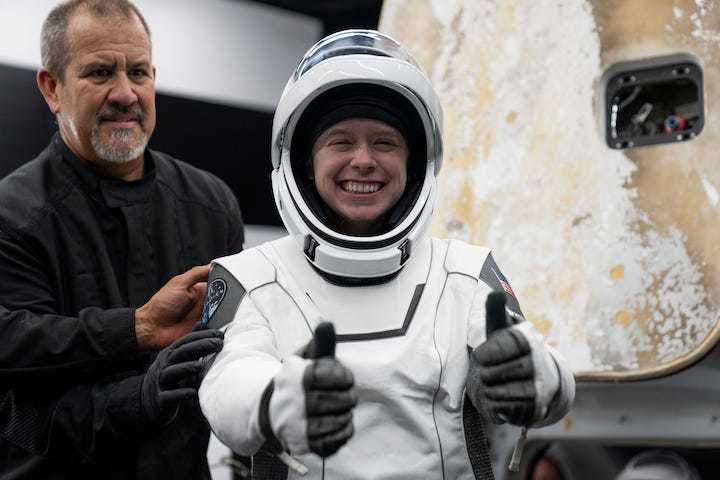 Hayley Arceneaux, a cancer survivor who was treated at St. Jude as a child, gives a thumbs up after splashdown off the Florida coast on Sept. 18, 2021. The Inspiration4 mission lasted about three days in Earth orbit. SPACEX
Quelle: Florida Today
Raumfahrt - SpaceX's Inspiration4 highlights the coming age of space tourism, but it's still far off
« Zum vorherigen Eintrag Zum nächsten Eintrag »
100 Views
Created with page4