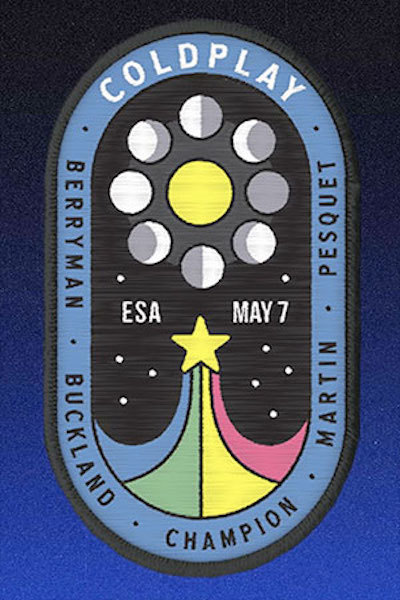 The European Space Agency x Coldplay patch celebrates the call the band made to the International Space Station to debut their new single "Higher Power" and raises funds to protect Earth. (Coldplay)

The British rock band connected with French astronaut Thomas Pesquet with the European Space Agency (ESA) to play the song on board the International Space Station on Thursday (May 6).

"Thomas, we sent you some music because right now we aren't able to play for anybody on Earth," said lead singer Chris Martin. "So we thought we'd just play it for you."

A specially-recorded music video for "Higher Power" featuring dancing alien holograms was uplinked to Pesquet ahead of the call. Pesquet, floating inside the space station's multi-window cupola, played the song back on his iPad.

The track, which makes reference to a "heavenly phone," going "a million miles an hour" and floating on, challenges the listener to find their own inner spaceman.

"You guys have to tell me, what's the story of the song and where did that come from and where does the alien vibe come from the album?" asked Pesquet.

"I think that we are right now able to imagine alien worlds as a way of saying what we think about life on Earth," said Martin. "It's safer to say it about aliens than it is to say it about humans, but really it's one big allegory."

"The song is about trying to find the astronauts in all of us, the person that can do amazing things," Martin said.

Before playing "Higher Power," the band took the chance to ask Pesquet about how Earth looks from orbit, its fragility and how he listens to music in microgravity. They also compared how life aboard the space station is similar to going on tour.

"I believe you are going to be on this space station for six months. How long does six months feel on a space station?" asked bass player Guy Berryman.

"As long as you are busy, it goes really fast," said Pesquet, who arrived at the station on SpaceX's Crew-2 mission on April 24 for his second long-duration stay. "And you know, it's psychological. When you reach the midway point, then you feel like it goes down the hill from there. The last months go so fast — like you're on a tour I'm guessing. You start thinking about coming back home, what you're going to do, taking a break and your loved ones. Then it felt good to come back home."

"It's like being on tour except only if we stayed on the bus for six months and didn't play any concerts," said Martin with a laugh.

To celebrate the off-planet premiere and raise funds to help save Earth, the band produced a mission patch marking the occasion.

The European Space Agency x Coldplay patch, now available for pre-order for €6 (about $7.30 U.S.) from the band's website, features the band members' names, as well as Pesquet's, around a design showing the different phases of a planet (or moon) around the sun. All of the proceeds from the sale of the 2.5-by-4.5-inch (6.35-by-11.43-cm) emblem will be donated to ClientEarth, which uses the law to help protect the planet.

"Higher Power" is now available to stream or download from Apple Music, Spotify, Amazon and YouTube, among other online services. A limited edition CD single is also available from Coldplay's website.

French astronaut Thomas Pesquet of the European Space Agency (ESA) connected with Coldplay on the International Space Station on May 6, 2021 to discuss the view from orbit and debut the British rock band's new single "Higher Power." (ESA) 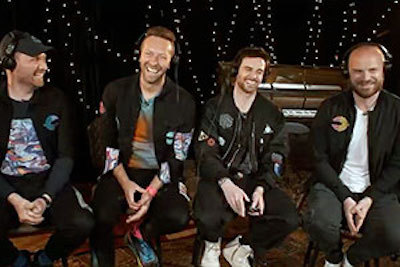 The members of the rock band Coldplay react to astronaut Thomas Pesquet of the European Space Agency aboard the International Space Station on May 6, 2021. From left to right, Jonny Buckland, lead guitarist; Chris Martin, lead singer; bassist Guy Berryman; and Will Champion, drummer. (ESA)