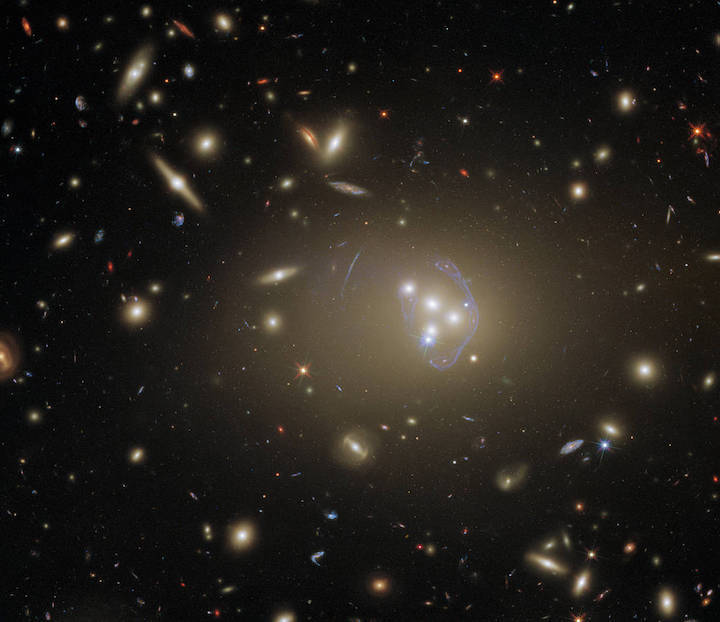 This detailed image features Abell 3827, a galaxy cluster that offers a wealth of exciting possibilities for study. Hubble observed it in order to study dark matter, which is one of the greatest puzzles cosmologists face today. The science team used Hubble’s Advanced Camera for Surveys and Wide Field Camera 3 to complete their observations. The two cameras have different specifications and can observe different parts of the electromagnetic spectrum, so using them both allowed the astronomers to collect more complete information. Hubble also observed Abell 3827 previously because of the interesting gravitational lens at its core.

Looking at this cluster of hundreds of galaxies, it is amazing to recall that less than 100 years ago, many astronomers thought the Milky Way was the only galaxy in the universe. Although astronomers debated the existence of other galaxies, it took Edwin Hubble’s observations of the Great Andromeda Nebula to confirm that it was in fact far too distant to be part of the Milky Way. The Great Andromeda Nebula became the Andromeda Galaxy, and astronomers recognized that our universe was much, much bigger than humanity had envisioned. We can only imagine how Edwin Hubble – after whom the Hubble Space Telescope is named – would have felt if he’d seen this spectacular image of Abell 3827.