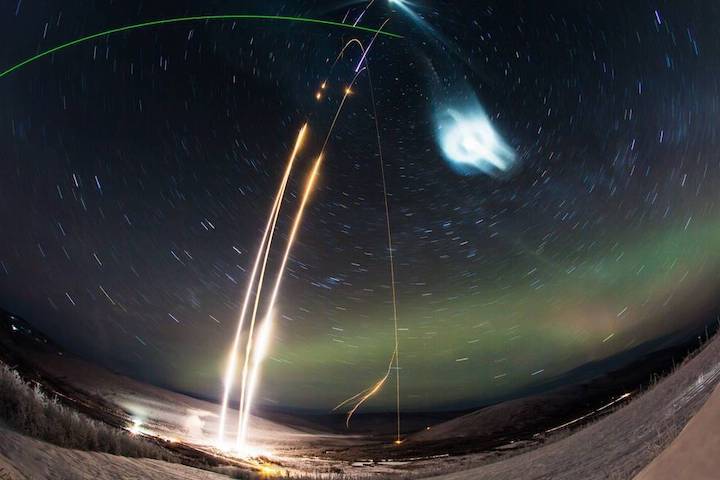 Since the late 1800s, observers have searched the polar skies for elusive, high-flying clouds that shine in the darkness. These polar mesospheric clouds, or PMCs, are wispy swarms of ice crystals that form in the late spring and summer over the North and South Poles. Observers spot them best in the twilight hours, when the Sun illuminates them from beyond the horizon against a dark sky. More than just a pretty sight, they also hold clues to what’s going on in Earth’s atmosphere. 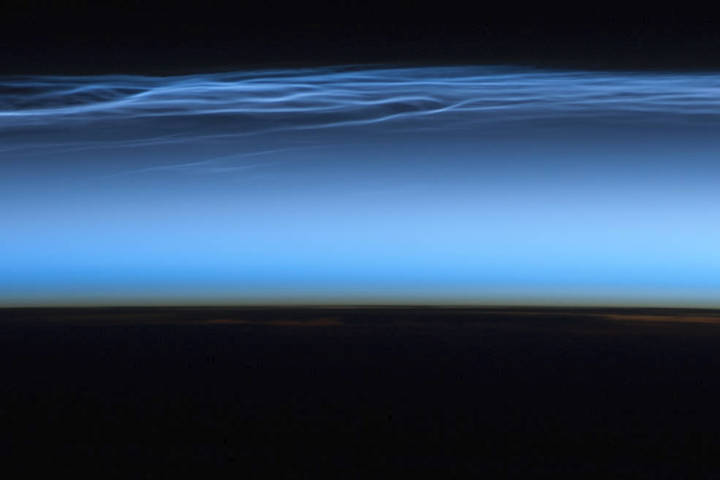 “What has attracted a lot of interest in these clouds is their sensitivity – they're occurring just on the edge of viability in the upper atmosphere, where it’s incredibly dry and incredibly cold,” said Richard Collins, space physicist at the University of Alaska, Fairbanks and lead author of the paper. “They're a very sensitive indicator of changes in the upper atmosphere – changes in temperature and/or changes in water vapor.”

Collins and his collaborators suspected that PMCs could be associated with cooling in the upper atmosphere – and he set out to try to understand the microphysics of the process. In a new paper published in the Journal of Geophysical Research, they shared results from NASA’s Super Soaker mission, a small suborbital rocket launched in Alaska, showing that water vapor in our upper atmosphere can precipitously lower the surrounding temperature and initiate one of these bright shining clouds.

To test this out, they decided to release a small amount of water and create their very own PMC. They specifically launched at a time – January in the Arctic – which is typically inhospitable to the formation of PMCs, hoping they could nevertheless catalyze one.

“We wanted to make sure to avoid mixing artificially created and naturally occurring PMCs,” said Irfan Azeem, space physicist at Astra, LLC in Louisville, Colorado and principal investigator of the Super Soaker mission. “That way we could be confident that any PMC we observed was attributable to the Super Soaker experiment.”

The Super Soaker rocket launched in the early morning hours of January 26, 2018, from Poker Flat research range in Fairbanks, Alaska. It reached an altitude of about 53 miles when the team triggered the explosion of their cannister of about 485 pounds of water. Eighteen seconds later, the beam from a ground-based laser radar detected the faint echo of a PMC.

The researchers plugged those measurements into a model that simulated PMC production. They wanted to know how the air where the water was released would have had to change in order to create a PMC like the one they observed.

“We don’t have direct temperature measurements of the cloud, but we can infer that temperature change based on what we think is required for the cloud to form,” Collins said.

The model showed that significant cooling must have happened. “The only way with the amount of water present that we could get a cloud form was to say that in the body of the cloud, there was a temperature drop – about 45 degrees Fahrenheit ( 25 degrees Celsius) in temperature.” Simply introducing water to the region, the results suggested, led to a significant local temperature drop.

“This is the first time anyone has experimentally demonstrated that PMC formation in the mesosphere is directly linked to cooling by water vapor itself,” Azeem said.

The paper goes on to connect the results to the reality of space traffic, as water vapor is a common byproduct of satellites and rocket launches. In the days of the space shuttle, for instance, a single launch was responsible for about 20% of the PMC ice mass observed in a season.

But more water vapor won’t mean temperature dropping without bounds, Collins explains. PMCs act like a thermostat. As the water vapor freezes, it turns into ice crystals. But those ice crystals absorb heat even better than water in vapor form. As the ice crystals heat up, they eventually sublimate back into vapor, and the cycle repeats.

“And so there's a yo-yo back and forth, regulating the temperature of the change produced by the injected water vapor,” Collins said.

“It depends on the amount of space traffic, on what happens if the water vapor budget up there increases,” Collins said. “If we had a major amount of new traffic then we're no longer in an ambient natural environment and we would have to start modeling this.”