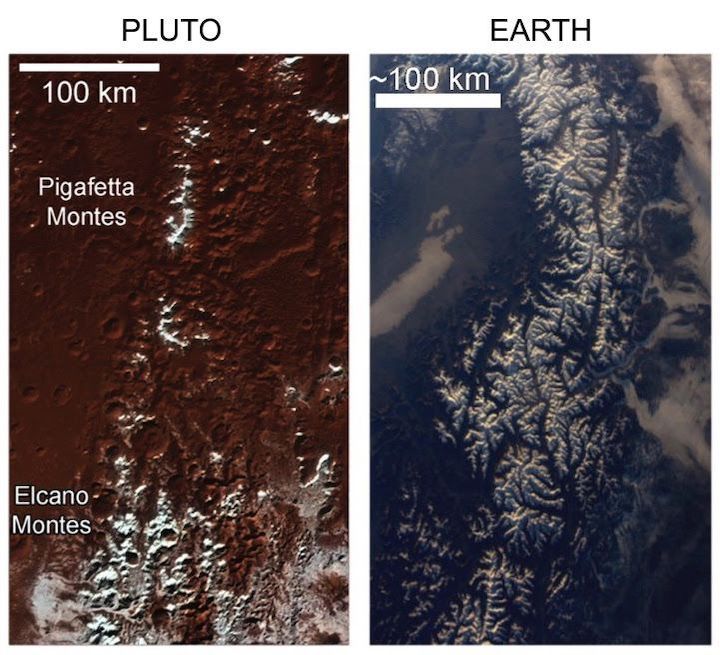 Mountains on Pluto have snowcaps that may have formed from the top down as opposed to the bottom up, the reverse of how snow caps form on Earth, a new study finds.

When NASA's New Horizons spacecraft flew by Pluto in 2015, it revealed a surprisingly complex and diverse landscape on the faraway world. Pluto's frozen surface varies greatly, featuring regions dominated by different kinds of ices — from frozen methane to frozen nitrogen and even water ice.

"The bedrock of Pluto is made of water ice, but it is so cold that the ice is harder than rock," study lead author Tanguy Bertrand, a planetary scientist at NASA Ames Research Center in Moffett Field, California, told Space.com. "The mountains on Pluto are made up of this cold hard water ice."

For example, the summits of  Pigafetta Montes, which can rise nearly 2.2 miles (3.5 kilometers) above their bases, possess brightly reflective caps at altitudes above about 1 mile (1.5 km). Similar frosts were seen on crater rims and walls in the Cthulhu region.

The exact composition of this frost on Pluto was unclear. While researchers identified methane, it was unknown whether it is pure frozen methane, frozen methane diluted with frozen nitrogen or a mix of both. The uncertainty about the frost's composition made it unclear how it might have formed.

To help solve these mysteries, scientists in this new study examined high-resolution data from New Horizons, focusing on the composition of the frost at high altitudes. This new analysis revealed that the snowcap frost "is almost pure methane ice, with traces of nitrogen ice," Bertrand said.

The researchers also developed high-resolution computer simulations of Pluto's climate. They focused on how methane circulates around the dwarf planet.

On Earth, mountain snowcaps are formed when moist winds rise upslope and cool, as temperatures drop with increasing altitude. The rising moisture condenses as it gets colder, forming snow on the tops of mountains.

"Methane is a trace gas on Pluto, as water vapor is on Earth, so initially it seemed logical that the high-altitude frosts seen on Pluto could form like on the Earth," Bertrand said.

However, "on Pluto, the opposite occurs," Bertrand said. "We discovered that a new and unique atmospheric process forms these snowy mountains on Pluto. It is remarkable to see that two very similar landscapes on Earth and Pluto can be created by two very dissimilar processes."

The new simulations revealed that atmospheric circulation on Pluto may concentrate methane gas a few miles above the plains of the dwarf planet. This, in turn, can result in methane condensing as frost on mountaintops.

Pluto's thin atmosphere gets heated by the sun and actually gets warmer as altitude increases, whereas its surface temperature remains uniformly cold, Bertrand explained. "Pluto's atmosphere has more gaseous methane at its warmer, higher altitudes, allowing for that gas to saturate and freeze directly on the mountain peaks tall enough to reach the enriched zone," he said. "At lower altitudes, the concentration of gaseous methane is lower, and it cannot condense."

Such activity might also help to explain how other methane reservoirs formed on Pluto, the researchers said.

"This discovery teaches us that there are still plenty of physical and dynamical processes out there in space that we do not know about, and that climates can be very different than that of Earth, despite forming similar landscapes," Bertrand said. "It is important to study Pluto and other planetary bodies because they are natural laboratories to explore and investigate the diversity of possible climates, which gives us more perspective on our own climate."

In addition, this work "also teaches us what is common and what is unique for planetary climates, and helps to understand where Pluto's climate, a dwarf planet's climate, fits in with the other climates we know of in the solar system — Earth, Mars, Venus, Titan, Triton," Bertrand said.

The scientists detailed their findings in a paper published Oct. 13 in the journal Nature Communications. 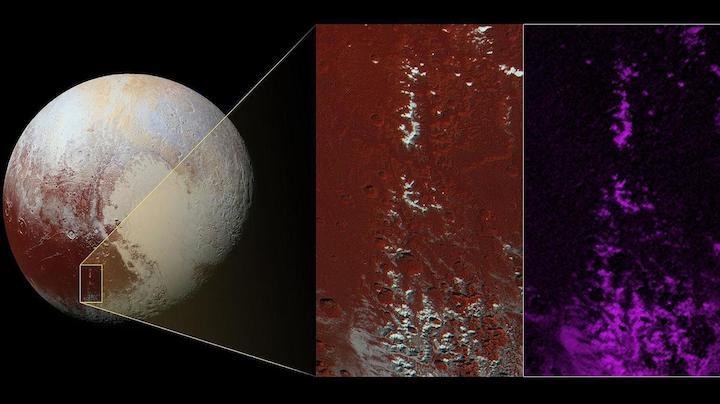