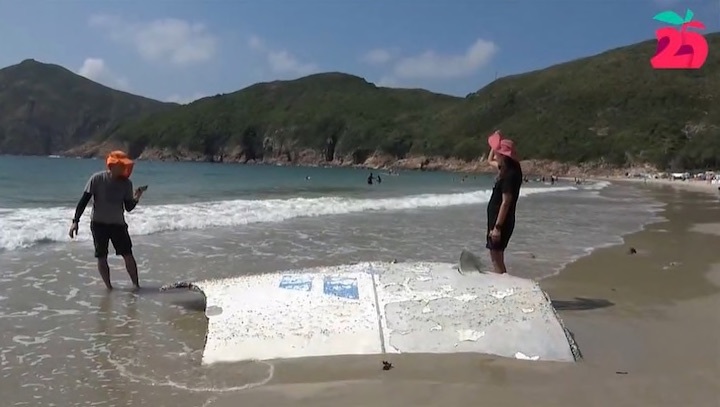 A broken piece of machinery measuring 2 meters by 2 meters has been found on a beach of Sai Kung in Hong Kong and appears to have come from an aircraft — possibly a rocket under China’s space program.

The grayish white fragment, about 5 centimeters thick, has been lying for several days on the beach at Pak Lap Wan, local residents say. The venue is popular for camping and water sports, and its latest attraction has drawn campers and beachgoers to take pictures with it.

Both the top and bottom layers are made of an aluminum-like metal, while the middle part has a honeycomb structure similar in appearance to the heat-insulating layer found on planes and rockets.

More revealingly, printed on the curved surface of the fragment is a light blue pattern which looks like that seen on China’s Long March space rocket. It also has an English acronym that reads either “CNS” or “CMS,” which could represent “China Manned Space”; two Chinese characters that together mean “navigation course”; and the line “8Y325A-5B S02-01.”

On a visit to the site, Apple Daily found many oyster shells stuck to the edges of the fragment, which looked like it had been in the sea for quite some time.

A camper told Apple Daily that someone stood on the broken piece to take a photo on Friday and was cut by the oyster shells.

Legislator Jeremy Tam, a civil aviation pilot by profession, said it was difficult to tell from a photograph whether the fragment belonged to an aircraft, ship or flying object, but urged those who had seen it to report to the police, saying it might be disposed of as rubbish soon.

He also called on government bodies, including the Civil Aviation Department, to investigate the matter and find out where the fragment came from and whether it had been involved in any injuries or accidents.

Tam said that if the piece was found to be part of China’s Long March rocket, there might be military and technology secrets to be protected. The Hong Kong government might want to seal off the beach to avoid people collecting bits of it and send the fragment back to mainland China, he said.