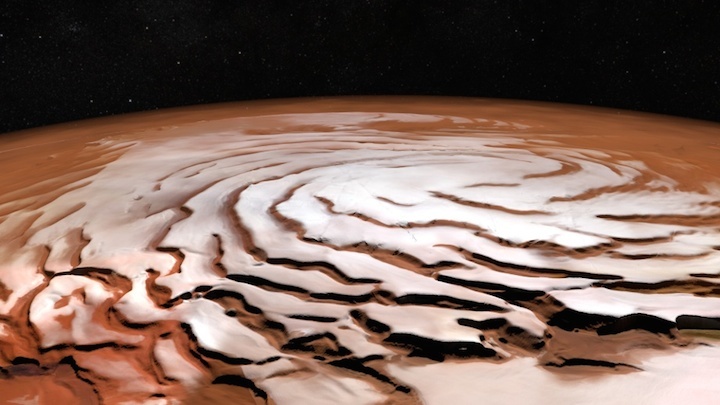 Mars’s southern highlands are covered in vast networks of valleys that are thought to have been created by running water long ago. But a new analysis suggests they may actually have been carved out by glaciers, indicating that early Mars may have been cold and icy, not warm and wet.

To determine how Mars got its trenches, Anna Galofre at Arizona State University and her colleagues examined data on 10,276 of these features in 66 valley networks across the planet. They compared the topology of the valleys with a set of 40,000 simulations of valleys formed by four different sources of erosion: rivers created by rain or snow, glacial movement, water melting beneath glaciers, and groundwater seeping up through the surface.

The researchers used a computer analysis to group the valleys by topological characteristics, including how any tributaries branch off them, the relationship between length and width of the valleys and the curving of their paths.

Despite prior, less detailed work suggesting that most or all of the valleys should come from groundwater flowing to the surface, they found that just 3 of the 66 networks were most likely to be the result of this. In contrast, 22 seemed to have been formed by water melting and flowing beneath glaciers.

Nine of the networks were most similar to simulated networks formed directly by glaciers, 14 were closest to rivers formed by precipitation and 18 weren’t distinct enough to be confidently attributed to any one formation mechanism, probably because of erosion over billions of years.

“Glaciation can explain a lot of those valleys very easily without having to invoke any strange mechanisms to explain things like channels flowing uphill or huge spaces between valleys,” says Galofre. “We can finally reconcile what the climate models have been saying for a long time – that extensive glaciation was likely to occur in the past – with the geological record.”

The idea that many of the valleys resulted from glaciers suggests that huge areas on early Mars were probably covered in enormous ice sheets. This is a controversial idea, says Galofre, because many studies have suggested that Mars was warmer in its past.

Luckily, even colossal sheets of ice wouldn’t kill the idea of life on Mars. “The ice sheets could provide an environment that’s not so bad for life – it would be thermally stable, protected by ice from dangerous radiation on the surface, and it could supply a steady reservoir of water,” says Galofre. “It would be a slightly different environment to the warm and wet Mars that many people think of on ancient Mars, but still an environment where life could thrive.”

NASA’s Perseverance rover, which launched on 30 July, will help answer the question of whether Mars used to be habitable and look for signs of ancient life there. When it arrives in February 2021, it will start looking for evidence on the surface and may help us figure out if the planet was actually warm and damp or if it was cold and covered in sheets of ice.

Early Mars was covered in ice sheets, not flowing rivers

A large number of the valley networks scarring Mars’s surface were carved by water melting beneath glacial ice, not by free-flowing rivers as previously thought, according to new UBC research published today in Nature Geoscience. The findings effectively throw cold water on the dominant “warm and wet ancient Mars” hypothesis, which postulates that rivers, rainfall and oceans once existed on the red planet.

To reach this conclusion, lead author Anna Grau Galofre, former PhD student in the department of earth, ocean and atmospheric sciences, developed and used new techniques to examine thousands of Martian valleys. She and her co-authors also compared the Martian valleys to the subglacial channels in the Canadian Arctic Archipelago and uncovered striking similarities.

“For the last 40 years, since Mars’s valleys were first discovered, the assumption was that rivers once flowed on Mars, eroding and originating all of these valleys,” says Grau Galofre. “But there are hundreds of valleys on Mars, and they look very different from each other. If you look at Earth from a satellite you see a lot of valleys: some of them made by rivers, some made by glaciers, some made by other processes, and each type has a distinctive shape. Mars is similar, in that valleys look very different from each other, suggesting that many processes were at play to carve them.”

The similarity between many Martian valleys and the subglacial channels on Devon Island in the Canadian Arctic motivated the authors to conduct their comparative study. “Devon Island is one of the best analogues we have for Mars here on Earth—it is a cold, dry, polar desert, and the glaciation is largely cold-based,” says co-author Gordon Osinski, professor in Western University’s department of earth sciences and Institute for Earth and Space Exploration. Collage showing Mars’s Maumee valleys (top half) superimposed with channels on Devon Island in Nunavut (bottom half). The shape of the channels, as well as the overall network, appears almost identical. Credit: Cal-Tech CTX mosaic and MAXAR/Esri. Co-author Mark Jellinek of UBC looking towards the Devon ice cap, standing on rocks that are more than a million years old. Credit: Anna Grau Galofre

In total, the researchers analyzed more than 10,000 Martian valleys, using a novel algorithm to infer their underlying erosion processes. “These results are the first evidence for extensive subglacial erosion driven by channelized meltwater drainage beneath an ancient ice sheet on Mars,” says co-author Mark Jellinek, professor in UBC’s department of earth, ocean and atmospheric sciences. “The findings demonstrate that only a fraction of valley networks match patterns typical of surface water erosion, which is in marked contrast to the conventional view. Using the geomorphology of Mars’ surface to rigorously reconstruct the character and evolution of the planet in a statistically meaningful way is, frankly, revolutionary.”

Grau Galofre’s theory also helps explain how the valleys would have formed 3.8 billion years ago on a planet that is further away from the sun than Earth, during a time when the sun was less intense. “Climate modelling predicts that Mars’ ancient climate was much cooler during the time of valley network formation,” says Grau Galofre, currently a SESE Exploration Post-doctoral Fellow at Arizona State University. “We tried to put everything together and bring up a hypothesis that hadn’t really been considered: that channels and valleys networks can form under ice sheets, as part of the drainage system that forms naturally under an ice sheet when there’s water accumulated at the base.”

These environments would also support better survival conditions for possible ancient life on Mars. A sheet of ice would lend more protection and stability of underlying water, as well as providing shelter from solar radiation in the absence of a magnetic field—something Mars once had, but which disappeared billions of years ago.

While Grau Galofre’s research was focused on Mars, the analytical tools she developed for this work can be applied to uncover more about the early history of our own planet. Jellinek says he intends to use these new algorithms to analyze and explore erosion features left over from very early Earth history.

“Currently we can reconstruct rigorously the history of global glaciation on Earth going back about a million to five million years,” says Jellinek. “Anna’s work will enable us to explore the advance and retreat of ice sheets back to at least 35 million years ago—to the beginnings of Antarctica, or earlier—back in time well before the age of our oldest ice cores. These are very elegant analytical tools.”