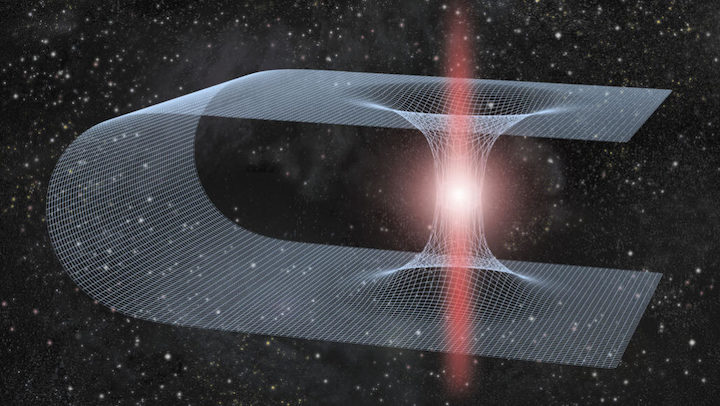 A wormhole is a tunnel through spacetime that connects different parts of the cosmos (illustrated). Scientists report that a black hole circling a wormhole would emit a telltale pattern of gravitational waves.

Gravitational wave detectors have already spotted mysterious black holes. But something even stranger might be next: wormholes.

A black hole spiraling into a wormhole would create an odd pattern of ripples in spacetime that the LIGO and Virgo gravitational wave observatories might be able to pick up, physicists report July 17 at arXiv.org. The waves would blink off and on as the black hole passed through the wormhole and then came back.

Wormholes are hypothetical objects in which spacetime is curved into a tunnel that connects distant cosmic locales or potentially different universes (SN: 8/5/13). From the outside, wormholes can appear similar to black holes. But while an object that falls into a black hole is trapped there, something that falls into a wormhole could traverse through it to the other side.

No evidence has been found that wormholes exist. “These are speculative for sure, with a capital S,” says physicist William Gabella of Vanderbilt University in Nashville. But if they do exist, researchers have a chance of detecting the wormholes via gravitational waves.

Gabella and colleagues considered a black hole with a mass five times the sun’s, orbiting a wormhole about 1.6 billion light-years from Earth. As the black hole swings around the wormhole, the researchers calculated, it would begin by spiraling inward as if it were orbiting another black hole. At first, the resulting gravitational waves would look like a standard signature for two black holes, a pattern of waves that increase in frequency over time called a chirp.

“You can’t reproduce that with two black holes, so it’s a clear-cut signal of a wormhole,” says physicist Dejan Stojkovic of the University at Buffalo in New York, who was not involved with the research. The waves “should be sticking [out] like a sore thumb,” he says.

According to the general theory of relativity, which describes gravity as the result of the curvature of spacetime, wormholes are possible. But actually detecting one would imply that there exists a strange type of matter that physicists don’t understand. That’s because a substance with negative mass would be necessary to prop open a wormhole’s throat to prevent it from collapsing, and no known type of material fits the bill.

The United States–based Advanced LIGO, or Laser Interferometer Gravitational-Wave Observatory, and Advanced Virgo in Italy detect ripples from black holes or dense stellar corpses called neutron stars. Those massive objects orbit around one another before they merge.

Scientists are now skilled at spotting such mergers, having confirmed more than a dozen since 2015, with more awaiting confirmation. But at some point, physicists will need to start focusing on more unusual possibilities, says physicist Vítor Cardoso of Instituto Superior Técnico in Lisbon, Portugal. “We need to look for strange but exciting signals.”