Some people believe that this cave in Ecuador harbors an alien library etched on metallic plates. 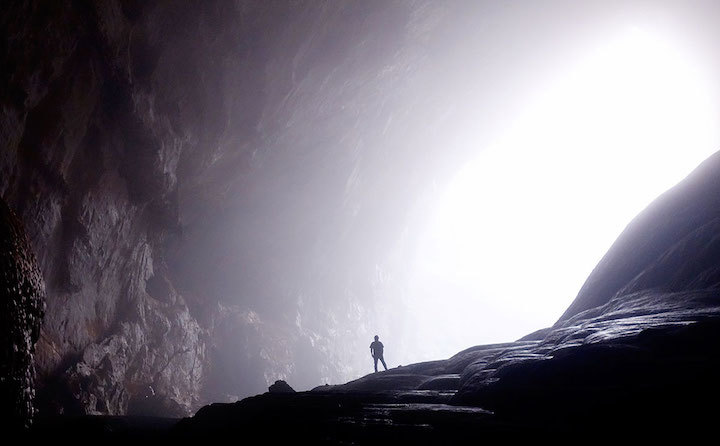 Turn on the TV to one of our favorite pseudoscience or pseudohistory networks, and you're more than likely to see a program revealing a marvelous cave in South America, filled not just with golden riches, but also with proof of ancient advanced civilizations — possibly even ancient aliens. It's called the Cueva de los Tayos in Ecuador, so incredible that scientists have been leading expeditions there for decades. Even Neil Armstrong joined one such expedition. Chief among the cave's treasures is a fabulous library inscribed on metal plates, revealing advanced knowledge. Today we're going to study what's actually known about the cave, and discover why this stupendous library has not been made public to the world.

Cueva de los Tayos is a real cave, located along the Río Coangos in a remote part of Ecuador. It is named for the tayos, or oilbirds, that nest in it. For centuries it has been used by the indigenous Shuar people, who descend on vines into the entrance shaft and collect the oilbirds. The cave has been as well documented as any by speleologists and speleobiologists, its history with the Shuar is well known to anthropologists, and little has been found outside the range of scientific expectations. You don't have to be an experienced Skeptoid listener to suspect that what a truly skeptical investigation of the cave will uncover falls somewhat short of advanced ancient aliens. The real story here is not what's in the cave, but in the ongoing saga of obsession with it — among a group of authors and explorers who continue to infect the general public with their alternative beliefs.

To capture this whole picture we need to make this a rare two-part episode. This week we're going to look at the history of expeditions to the cave, what they found, and the characters who drove them; and next week we'll peel back that layer to show how the entire folklore collapsed under the weight of its own fiction.

Cueva de los Tayos first drew worldwide attention in 1972 at the hands of author Erich von Däniken, who had become a multimillionaire following the outrageous success of his 1968 book Chariots of the Gods, one of the original books in the "ancient aliens" genre which posited that ancient people were not very industrious and that all the world's great works were done by visiting aliens. Gold of the Gods was von Däniken's newest followup book, and in it he detailed a visit he made to the cave in 1969, the year after Chariots of the Gods.

Accompanied into the cave by the Hungarian-Argentine amateur explorer Juan Móricz, von Däniken wrote of fabulous discoveries almost beyond description. The cave itself was cut and polished with advanced machinery to perfect right angles and smooth surfaces. They found furniture made of plastic and gold. There were countless fantastic artifacts and treasures, including lifelike statues of humans and animals, rooms plastered with precious stones, and a golden skeleton in a crystal sarcophagus. And at the heart of the cave, the metal library itself — consisting of thousands of metal and crystal plates, 96x48cm, precisely etched in an alien language and recording 250,000 years of history — and guarded by an elaborate system of active laser beams.

Von Däniken's western audience was sold. One buyer, the Irish ancient alien theorist Stan Hall, mounted a large British expedition to the cave in 1976, and managed to persuade Neil Armstrong to accompany them, as well as archaeologists and speleologists. Author Jason Colavito wrote about how it went:

...Armstrong, as Honorary President of the expedition, flew to Quito in August on a British Royal Air Force cargo plane along with Hall and the Black Watch and the Royal Highland Fusiliers regiment to explore the caves, though he was unaware of von Däniken's wild claims about them or Hall's alternative theories. It took only a day's exploration at Cueva de los Tayos to determine two essential facts. First, there was no metal library where von Däniken had claimed. Second, in Armstrong's own words: "It was the conclusion of our expedition group that [the caves] were natural formations." No lasers. No gold library. No aliens.

Other than collecting a handful of ordinary samples from the cave that were of botanical or archaeological interest, the expedition was a complete failure. Von Däniken and Móricz quickly countered that Hall had gone into the wrong cave, a hand-waving rationalization that all three continued to give every time anyone entered any cave in the region searching for the treasure, and come out empty-handed. Believers in the treasure still claim this, for expeditions to the cave have not slowed.

In January 2018, Stan Hall's daughter, artist and New Age healer Eileen Hall, returned to Ecuador herself with TV personality Josh Gates for an episode of the show Expedition Unknown, armed with her father's unique background. It should come as no surprise that Eileen and Gates failed to find anything, just like every other expedition.

Over the long history of expeditions to the cave, plenty of photographs and video have come back, but all show despairingly normal natural cave formations. Many show sedimentary layers which fracture on straight lines, and some have tried to claim that these are the mechanically cut and polished surfaces described by von Däniken, but these efforts are not persuasive to anyone with even a passing knowledge of geology. How could it be that this cave which continues to produce nothing at all, could still have such a storied history and continue to tempt seekers?

To find this answer, we can look at what tempted Hall, and Móricz before him, and that continues to tempt TV producers who still somehow think they'll come across something to put on camera.

Stories of Inca gold hidden in underground tunnels go all the way back to the Conquistadors. Thus there's nothing all that unique about the legend of Cueva de los Tayos; stories like it have blanketed the continent for centuries. The only thing that put this particular cave on the map more than any other was Erich von Däniken and his books about ancient aliens. And while we can point to Juan Móricz as the reason von Däniken wrote about this particular cave, we still have to look at what inspired Móricz.

That influence was largely an enigmatic local Catholic priest named Father Carlo Crespi. Crespi was well known for his collection of golden artifacts said to have come from the cave; the stories told that he traded with the Shuar people and acquired his collection over the years. Móricz and others had all seen (and been amazed by) Crespi's little museum at his church in the city of Cuenca, about 170km and a day's drive away. Even archaeologists have acknowledged that it contains some interesting pieces — and in next week's episode, we'll look much closer at Crespi's collection.

Bolstering Crespi's artifacts were a longstanding local tradition of the metal library deep inside this cave. These stories came from a man who said that he had actually been inside the cave as a teenager and seen the metal library with his own eyes. His name was Petronio Jaramillo. When Stan Hall first began traveling to Ecuador to see the cave for himself, Jaramillo was one of the men he met with. The two developed a lasting friendship, though oddly, both agreed that Jaramillo would not share with Hall the exact location of the treasure cave.

Interpersonal relationships would soon prove to be quite a hand grenade tossed into the history of searching for the treasure. Much has been written about the fact that following the publication of Gold of the Gods, Móricz gave an interview to the German magazine Der Spiegel accusing von Däniken of making up much about his own exploration, as if trying take credit away from Móricz. Von Däniken gave an interview to Playboy in which he admitted greatly exaggerating his trip to the cave for dramatic effect, as any author's due. Incensed that this very popular author was making money by taking credit for Móricz's work, Móricz never spoke to von Däniken again.

Then a couple years later, when Stan Hall was planning his large 1976 expedition, he attempted to recruit Móricz to join him, but both men were insistent on being credited as the cave's discoverer, so they had a falling out as well. Móricz found himself on the outside looking in: Hall was successfully mounting a very popular and public expedition, and von Däniken was raking in the cash. Móricz himself, meanwhile, had made many more trips to the cave than either man, and done much more work on it. In fact, even while von Däniken was still writing Chariots of the Gods, Móricz had already been conducting expeditions to the cave. For example, in 1968, he had taken a group of Mormons to the cave. Led by Elder Jim Jesperson, they had hoped to find archaeological proof of the Book of Mormon stories. They found none.

Móricz died in 1991, having never actually seen the treasure himself. Von Däniken, having been raked through the coals pretty harshly by the press for fictionalizing so much of his books, eventually stopped talking about the Cueva de los Tayos and no longer claims to have visited it. Petronio Jaramillo, the only man who claimed to have seen the treasure with his own eyes, was killed in 1998 in a family dispute. The treasure having always eluded Stan Hall as well, he too eventually stopped looking for it.

Shortly before he died in 2008, Hall wrote a book called Tayos Gold in which he revealed all, the summation of his decades of fruitless searching. It is an eyebrow-raising book, full of paranoia and delusions, and raises serious questions about Hall's mental state. He claimed to have discovered Atlantis and other ancient civilizations, and wrote at length on what he called 'catastrophism theory' about the origin of the Earth: "Interplanetary catastrophism is the missing link between evolutionism and creationism." As to the true location of the actual cave wherein the metal plates are to be found, he stated:

In a letter of 17th January 2005 I advised the Ecuadorian Ambassador in London of my calculated location of the Tayu treasure and the launch of my website www.goldlibrary.com. The following week I informed the Ecuadorian press... These were actions taken to responsibly transfer information to the State of Ecuador and to safeguard the families of Petronio and myself.

Hall's calculated coordinates — a latitude and longitude widely available on the Internet (77°47'34" W 1°56'00" S) — are for a spot about two kilometers upriver from the cave's actual entrance, where no cave has been found. They are one pillar of the legacy left by the first generation of seekers of the lost metal library; the other two pillars being the original story from Petronio Jaramillo of physically being in the treasure room, and Father Crespi's golden artifacts. These three pillars are the answer to our original question: why people continue believing in this cave that has been so thoroughly proven to contain nothing interesting.

And, as you might expect, all three pillars crumble under the slightest scrutiny, and this will be the subject of next week's show in Part 2.